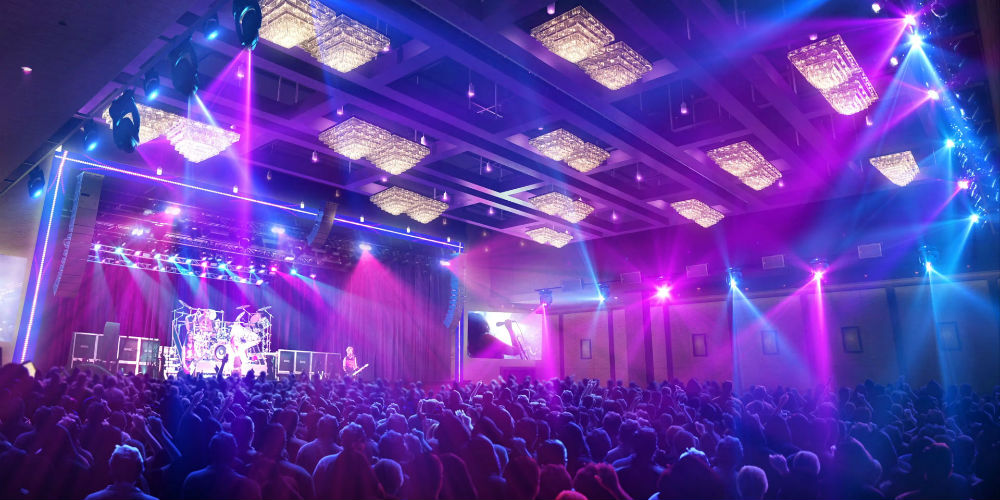 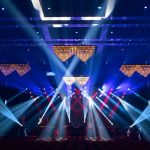 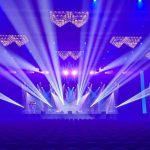 Many casino properties are investing millions of dollars to add entertainment options as gaming competition grows and consumer demands and expectations change to include non-gaming lures and Parx Casino’s new entertainment venue is another way to attract customers.

Starlite had an existing relationship with Parx’ parent company Greenwood Gaming & Entertainment, Inc. and, in fact, had provided a considerable amount of the technology for the casino when it was originally erected in 2009 – including 140 zones of distributed sound and sound-masking, more than 1500 speakers, 93 amplifiers, 90 equipment racks, 67 PZM’s, a large JBL VerTec Line array, a Magenta Mondo III 4×96 switcher and Crestron control.

Additionally, Starlite’s team frequently collaborated on some high-profile projects with Nathan Powell, the former lead consultant at Production Technology Consultants Group, Inc., who is now the Director of Entertainment Technologies and Design at Parx. So, naturally, when Greenwood Gaming began planting the seeds for the new live event venue at the property, Starlite was brought into the discussions early on.

For a casino venue project, this was very technically advanced. Starlite’s design engineers collaborated with stakeholders at Parx for more than 2-years on the design and schematic development of the project, which included numerous revisions along the way – including, for example, a decision to raise the roof an additional 18-feet AFTER it had already been constructed. 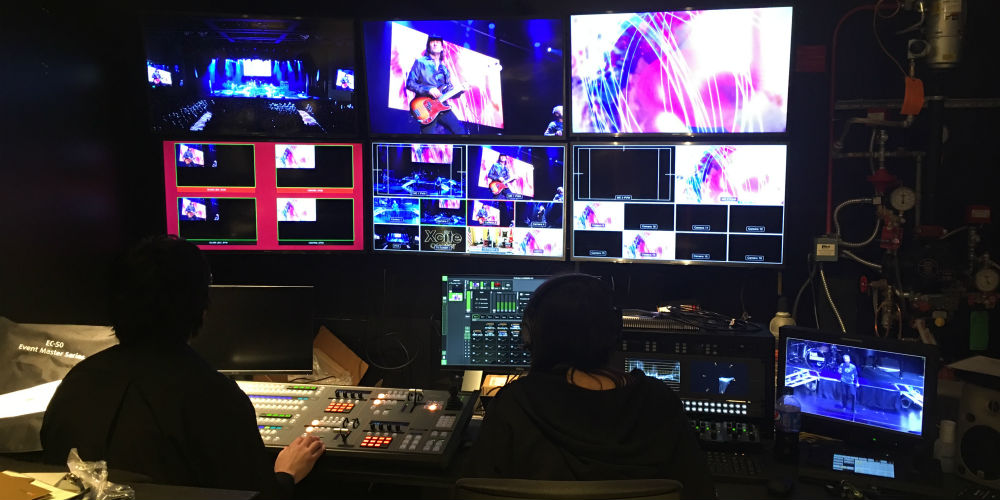 Countless meetings were held at Starlite’s headquarters in Moorestown, NJ as well as the project site and we encouraged Mr. Powell and John Dixon, the Chief Technology Officer at Greenwood Gaming & Entertainment to attend numerous industry trade shows in order to preview first-hand the products currently in the marketplace, as well some private “sneak peek” demos of emerging technology, which ultimately proved to be quite helpful.

The 30,000-square-foot live entertainment venue known as the Xcite Center is the crown jewel of the project which can accommodate 2,000 standing or 1,532 seated, and can also be configured for boxing and other unique events.

The state-of-the-art venue boasts a 65-foot wide by 30-foot deep stage, 26 crystal chandeliers which are automated to retract into the ceiling during shows and a “spare-no-expense” performance audio, video and lighting system.

In addition to the Xcite Center, the expansion project added 45,000 square feet of space totaling the property footprint to 375,000 square feet. As part of the property development, Parx Casino will welcome Oliveto restaurant and Café and the Liberty Bell Gastropub and a brand new exclusive poker room to the main casino building, all of which Starlite provided technology for.

Although the Xcite Center is primarily a proscenium theater, it was imperative that the venue was multifaceted to accommodate a wide variety of acts and audiences, which meant that the technology systems had to be flexible, adaptable, and of course, rider friendly.

The 74-box Meyer Sound system is the centerpiece of the audio design and includes 26-Leopard compact linear array loudspeakers, 14- Leo LFC subs, 17-UP-series point source loudspeakers around the perimeter of the room for both sounds effects and for when the room is set up in configurations other than proscenium theater, and 17-UPM and MJF high-fidelity monitors as well as 186 JBL Control speakers in the restaurants. The system is capable of reproducing audio with extraordinary accuracy, captivating audiences with both power and subtle musical detail.

The majority of the performance rig is LED moving lights although there are some static spots for key-light and audience blinders. Both systems are capable of being controlled together in order to allow the room and stage to both be part of the show. Starlite also provided digital cameras, digital intercom, custom staging, ADA ramps, curtains and (4) Robert Juliat Victor followspots as well as a sophisticated rigging system consisting of 14 ETC Prodigy hoists and a Foundation rigging controller, and 18 Stagemaker chain motors which have encoders, load cells, and error reporting all built in was integral to support the audio, video, and lighting systems safely. 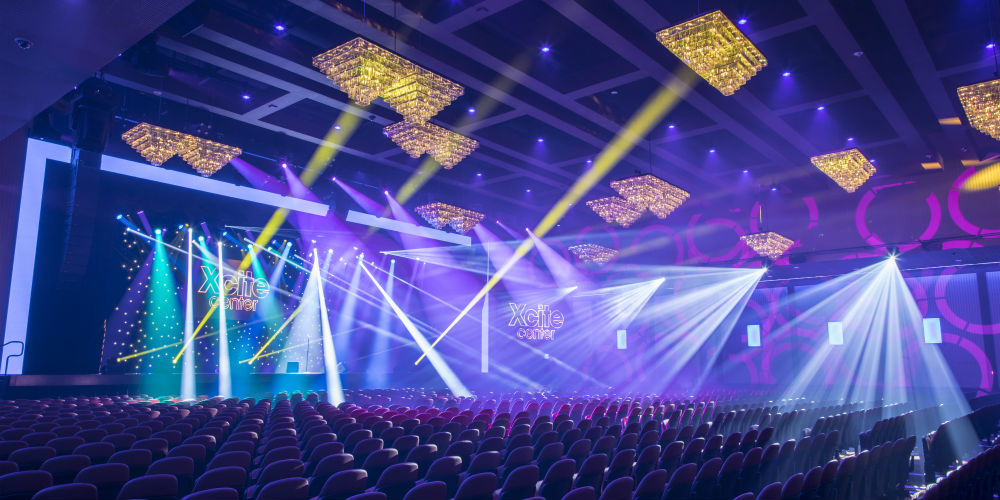 The system is truly a complete multimedia arena concert experience and to boot -The entire system is networked on a single-mode fiber system with 10-gig speed.

Mr. Dixon, keenly aware that technology can change very quickly, was determined to approach the venue’s technology strategically, by specifying only the latest products whose features both fit the bill, and would continue to have staying power for some time to come.

Every project has challenges to overcome, particularly with projects of this scope – and this project was no different.

The first issue we encountered was that the General Contractor whom we had been coordinating with for more than 22 months, was replaced midstream.

The new G.C. had to get a handle on the project at once since the project was due to be complete in 9-months and Starlite still had to finalize the design, prepare the shop drawings, coordinate with the other trades, and procure product. But we worked through it by tightly coordinating with the Owner’s key staff including the Architect and Prime Contractors to assure all solutions were seamlessly integrated, while at the same time meeting the needs of the casino, the venue, and the artists.

Additionally, the electrical room servicing the expansion was on a raised 2nd floor – which the last section to be erected. With the schedule already tight – not being able to energize and test the permanent power until the end of construction was scary, particularly since the Owner and Starlite won’t accept anything but perfection.

But despite these numerous challenges, In the end, it was an amazing achievement between all the trades and it came together just in time! 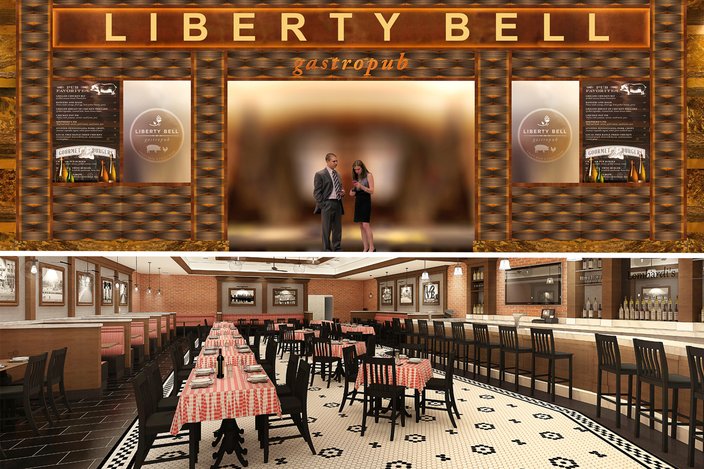 The staff and board members at Parx Casino and the Xcite Center were astounded to see the grandeur and impressive technological systems of the intimate new venue expansion come to fruition.

The venue is expected to be used up to three times per week, with 80 to 100 acts and events in its first year including A-list musical artists, comedians, and boxing, mixed martial arts, festivals and other unique events.

The dynamic and dead-accurate audio system is truly world-class and fills the room seamlessly and without any coloration. The eye-catching lighting, video, and special effect systems, including high-power diode lasers, 4 grandMA lighting controls, a Green Hippo V4 Karst media server tops it off. Even the dressing rooms and the amenities in the green-rooms are-over-the-top for a venue of this size.

During Starlite’s commissioning, just about every day, Nathan Powell gave tours to employees, media, local dignitaries and township officials. Everyone left with an enthusiastic smile on their face and a desire to experience an actual show in the new Xcite Center.

The venue opened in January to rave reviews from the artists, tour managers, technical staff, patrons and the media.

This job was extremely challenging and included a lot of intricacies, but it was also very rewarding and a project that Starlite and the client are very proud of.

Bands and crew alike share the pleasure of working in a fantastic venue with state of the art equipment that looks, sounds, and functions in unison. Starlite shares the joy of the results of the build with the casino.

In all, the Xcite center is a remarkable live entertainment venue with unparalleled technology that will delight patrons and top-run performance artists alike for years to come.