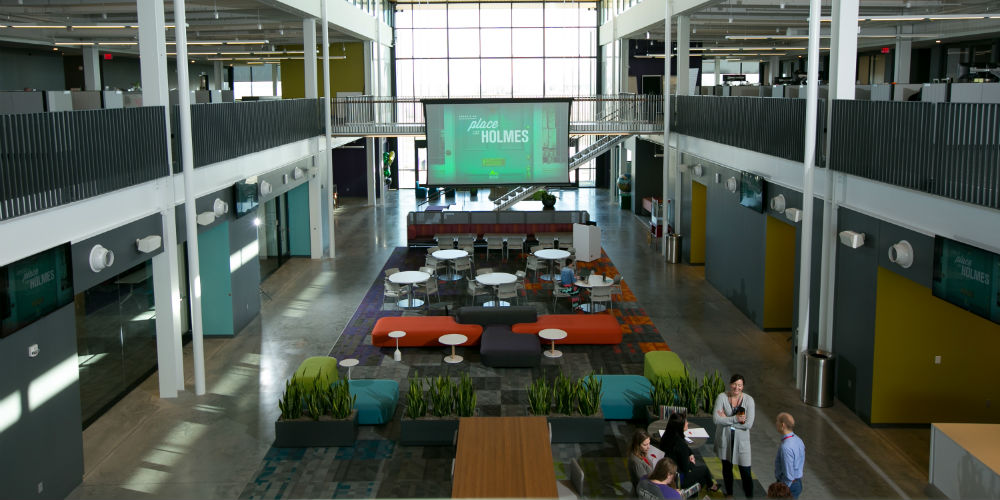 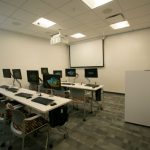 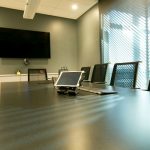 Holmes Murphy faced poor audio quality, lack of video conferencing capabilities, and a constant need for IT support in their meeting spaces. When 75-percent of their meetings included remote participants and have a growing workforce of young professionals who expect intuitive technology, Holmes Murphy knew they needed a change.

The organization recently rebuilt their headquarters to include spaces that encourage a collaborative culture and align with their employees’ workflows – whether on-site or working remotely around the United States. To outfit the 90,000-square-foot building with upgraded and intuitive audiovisual technology, Holmes Murphy partnered with Mechdyne.

The success of this project heavily depended on Mechdyne’s involvement early on in the design of the building. Holmes Murphy envisioned an expansive building with large windows, open space, and an overall modern design—including concrete floors and walls, and a wooden ceiling. Although this design could pose potential audio and video complications, Mechdyne’s regular communication with Holmes Murphy, Weitz Company, and Substance Architecture— all of whom make up the integrated project team—enabled them to design and install features that would complement the new space and enhance employee productivity.

While outlining the goals to achieve from a new headquarters, Holmes Murphy identified upgraded and more user-focused technology. As a result, they decided to bring an audiovisual provider on-board early on in the design of the building, especially considering the scope of the project. This provider would need to outfit new meeting rooms, training rooms, collaboration spaces, executive conference rooms, and the atrium in a way that worked with the building’s structure, general aesthetic, and the users’ needs. Holmes Murphy was working with Weitz Company, the general contractor for this project, who recommended Mechdyne Corporation as the technology integrator.

The Mechdyne team provided a proposal that would enable the integrated project team to collaborate on the design of the building. Mechdyne also had the opportunity to conduct user interviews with Holmes Murphy employees in order to gain a better understanding of their workflows and primary needs from the AV upgrade. This became the start of a working relationship between the Mechdyne, Holmes Murphy, Weitz, and Substance teams.

Holmes Murphy’s new headquarters boasts large windows, high, open ceilings, and an overall concrete structure. Although these features made for a clean and modern design, they also created audiovisual challenges during installation. Mechdyne worked with Weitz Company and Substance Architecture to ensure the AV would complement their designs while, most importantly, meeting the client’s needs.

To fill the open space and reduce echo throughout the building, Mechdyne designed a sound-masking system made up of over 700 QT Active Emitters. However, the only options for installing white noise speakers were structural beams spanning the ceiling. In order to design a mounting solution that would allow the speakers to hang low enough to work effectively, and not disrupt the aesthetic of the building, Mechdyne staged everything at their Technical Center in Marshalltown, Iowa. Their installation team constructed a physical mock-up of the ceiling structure and designed the mounting solution that would complement the open design. To ensure the solution would work optimally within the space, Mechdyne’s installation team coordinated on-site testing with Weitz Company during construction.

The second challenge presented, was finding a projector solution bright enough for the light-soaked room, which hosts Holmes Murphy’s company-wide meetings and events. The projector screen that would hang from the 40-foot ceiling would need to be seen by everyone in the atrium and remote teammates tuning in via Skype. As a result, Mechdyne’s engineering manager worked with vendor partners to test numerous projectors and screen materials in the atrium space during the construction of the building, to find the best solution for the natural lighting. Also, when considering the use of the space, Mechdyne worked with the building architect to come up with a mobile projector solution that could be moved throughout the atrium or stored easily, as needed. 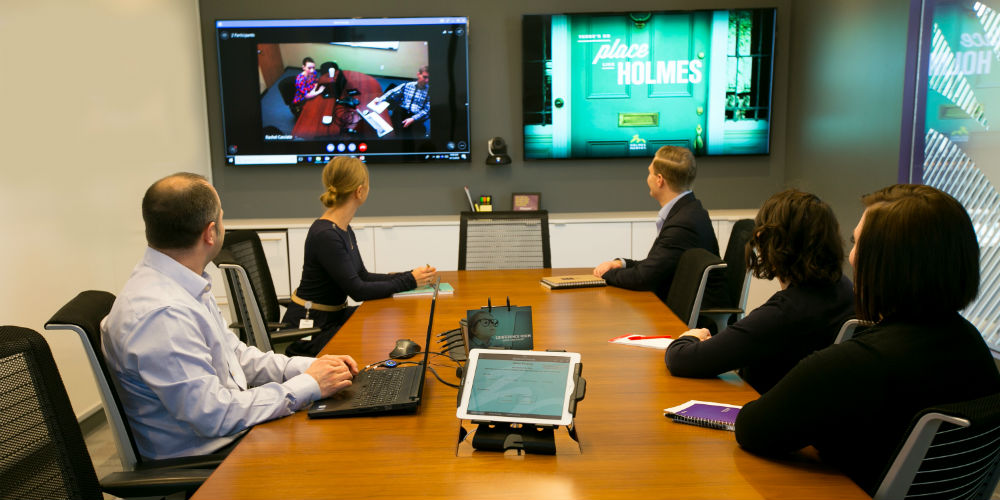 The advanced meeting automation systems found in Holmes Murphy’s collaboration spaces provide key benefits for employees. These systems utilize Mechdyne’s proprietary automation software that detects user activities within the rooms and manages the system power and source routing. The user can power up the room, per their preference, by doing one of the following:

The meeting spaces are also equipped with a Crestron control panel, used for basic controls—volume, telephone call dialing, camera aiming, and other advanced controls. At the end of a meeting, when the user logs off the PC and disconnects, the display(s) will automatically power down after 15 minutes of inactivity.

Another unique benefit of the integrated solution is the atrium’s flexible technology capabilities. As soon as visitors and employees pass through the reception area, they see the expansive, bright atrium. It is used for hosting company-wide meetings and events, visitor presentations, and every-day collaboration meetings among employees.

There are four 65-inch displays located around the atrium. A lectern sits at the front of the space and gives users the option to use wired or wireless laptop inputs. Dual Digital Projection 18,000-lumen Laser projectors with 1920×1080 native resolution are used with a long-throw lens to project the content 80 feet onto a motorized drop-down screen. This type of projector is optimal for use in an open space filled with natural lighting, which is important for visibility when presentations and meetings take place. Also, utilizing dual projectors provides users and their audience increased brightness and a back-up capability. Eight wall-mounted speakers surround the space to provide sound reinforcement.

Since Holmes Murphy opened the doors to their new headquarters, employees are experiencing immediate improvements from their old technology infrastructure.

The advanced meeting room automation resulted in decreased set-up time before meetings for Holmes Murphy employees; employees went from 45-minute set-up times with IT on stand-by, to a maximum of 15 minutes without IT assistance. Teams now collaborate seamlessly in virtual meetings across locations, feeling more connected than ever before. Training opportunities are easier to coordinate and execute in the multi-display rooms, showcasing clear audio and flexible video options. 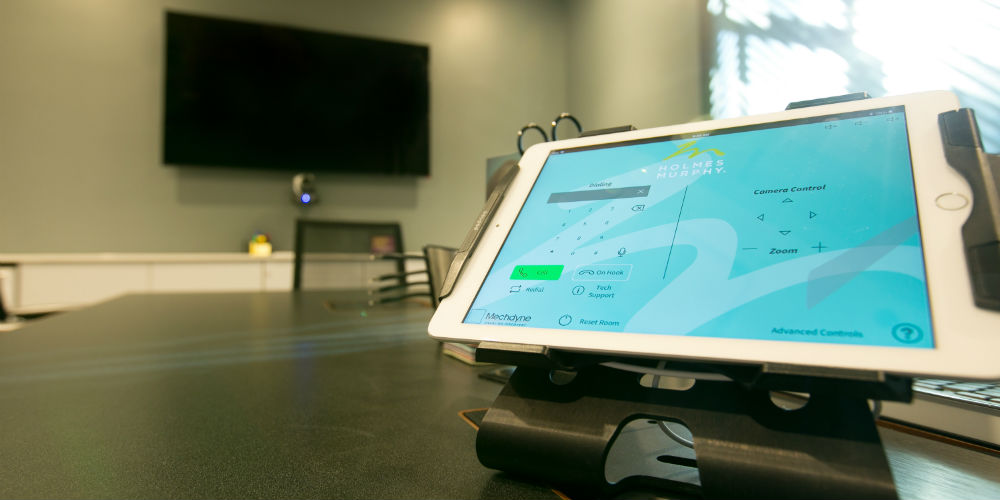 “We’re now in more of a seeking environment as a result of the new technology. The technology enables users to figure things out on their own rather than always asking for help with IT or information from other teams… When I came here, it was seamless. Everything is very intuitive,” says Kay Murphy, Sr. Learning and Development Consultant, Holmes Murphy.

“The fact that everything is user-friendly and doesn’t take any extra knowledge to get it going, that’s the best thing,” says Aaron Bush, IT Support Specialist II, Holmes Murphy.

“The biggest [improvement] is the reduced start-up times with the smaller PCs. It’s phenomenal. It’s gone from a long loading-time for the older PCs to maybe a 40-second loading time for new users or a 15-second start-up time for regular users,” says Ben Wilker, Learning and Development Consultant, Holmes Murphy.