Every generation has new opportunities and tools at their disposal, and educational institutions do their best to keep up. Back in the 80s it was personal computers. In the 90s it was the internet. And today, since the 2007 launch of Apple’s iPhone, it’s mobile devices and the app in education.

Much has been written about how Millennials are different than previous generations, in what they expect, how they prioritize and how they use technology. William Straus and Neil Howe define “Millennials” as being born between 1982 and 2004, while the Pew Research Center has this generation beginning in 1981 with no end date. Either way, there’s another group coming behind them – sometimes called Generation Z, or Centennials, the iGeneration, iGen or even Post-Millennials. We’ll use the term “Generation Z” here. No one seems to be able to agree on exact dates, but most demographers start this emerging generation somewhere between the mid-1990s and the mid-2000s. This means that, depending on your definition, Gen Zers are currently in the 13-23 age range; they are enrolled in school right now, both K-12 and higher education. And they are starting to have kids of their own – research at the University of Iowa shows that 90% of two-year-olds already had “moderate proficiency” with a tablet device in 2015.

So, tablet and smartphone usage is high in young people and is growing fast. According to the  Pearson Student Mobile Device Survey , 78% of elementary school students report that they “regularly” use a tablet, 69% of middle school students say the same, and almost half (49%) of high school students regularly use tablets. Tablets are edging out smartphones with younger students, but smartphone usage has also increased across all grade levels, with older students using them more – the numbers are 53% for elementary students, 66% for middle school and 82% for high school students. 41% of all students (averaged) say they use a smartphone to do their school work and least twice a week, and 88% of K-12 students use a smartphone to do school work at least once a week. And, laptops are still popular – 83% of students say they use a laptop for school work during the year

Mobile technology use in both schools and private life indicates a sea change in the way students process information. It has been argued that, before the digital revolution, it was important to have information in your head, but now it’s important to know where the information is and how to quickly access it. (Just consider: how many telephone numbers did you have memorized 20 years ago? How many do you have memorized today?) 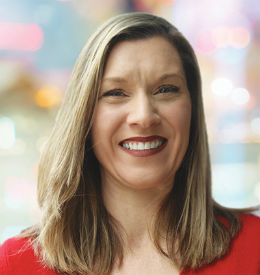 Ellyce Kelly is the lead Client Relationship Manager at Visix, Inc., headquartered in Atlanta, Georgia. Ellyce was formerly the Lead Software Trainer, and is now Visix’s primary communications consultant, working with customers to maximize their digital signage programs through training and assistance with technology set up, pilot programs, best practices implementation, content campaign development and ROI development. She has been with Visix for eight years, and has over 12 years of experience in sales, marketing, and public relations.

Sometimes which devices they use depends on what the school makes available to them, though costs have come down to the point where many simply buy the devices they like using best. 85% of college students own a smartphone (compared to the American public taken as a whole), 52% own a tablet and 19% own a 2-in-1 or hybrid computer. A report by Re:fuel Agency shows that the average college student carries an astonishing seven internet-connected devices with them on campus.

The trend is obvious – more and more people are buying mobile devices and using them every day for private life, school and work. Older people prefer laptops, then smartphones, then tablets, while younger people’s preferences are the exact opposite, with tablets leading the pack and laptops lagging.

But no matter which devices people prefer using, the tech is essentially the same. Programs are no longer called “programs” – they are “apps” now. Touchscreen interfaces are the norm, no longer seen as cool or futuristic, but simply as the new normal. Any educational institution that has technology that seems old-fashioned is going to be perceived negatively – hopelessly behind the times, outdated and irrelevant.

Schools for all levels and ages are struggling to adapt to the new paradigm which is changing at an unprecedented rate. According to McGraw-Hill Education, smartphone and tablet usage for studying more than doubled in a single year, jumping from 40% in 2013 to 81% in 2014). An EDUCAUSE report found that smartphones are used more often to access the internet (though tablets are right behind), and the most popular apps include academic and university-specific apps, education apps (Quizlet, Duolingo, flashcards), book apps (iBooks, Coursesmart, Kindle, Kobo), reference apps and websites (Wikipedia, dictionaries) and even productivity apps (Evernote, Dropbox, Google Drive, OneNote).

Some institutions are incorporating apps into actual classroom work – either publicly available ones or custom apps created for a specific purpose and curriculum. Digital signage and alert systems are showing up on campuses and in K-12 schools – not just to display announcements in hallways, but with messaging to portable devices built in. Websites are coded with HTML 5, making them responsive to different-sized screens. Streaming of athletics events, lectures and podcasts are becoming more commonplace.

This massive use of the internet puts a strain of old WiFi networks, so many universities and schools have had to upgrade their systems. WiFi access is seen increasingly as a basic right by younger people, and just like they will choose one cafe over another based on WiFi availability and quality of network, they will also start choosing schools the same way. With cloud storage quickly becoming another new normal (over half of the Global 1000 companies use public cloud storage for data), there will be even more pressure on network speed and bandwidth.

This techno-centric culture might seem new to the people in charge, but to students, it just is, and has always been this way. Both K-12 and higher ed institutions may want to consider drastic changes to their information infrastructure, rather than going incrementally. Look at the trends, predict what things will be like in 10 years, and then plan for that.

The faster a school can give its students a more “consumer-like” experience – which means one that’s just like what they have outside school – the more students will thrive in that environment.

For more food for thought and statistics, try these resources: