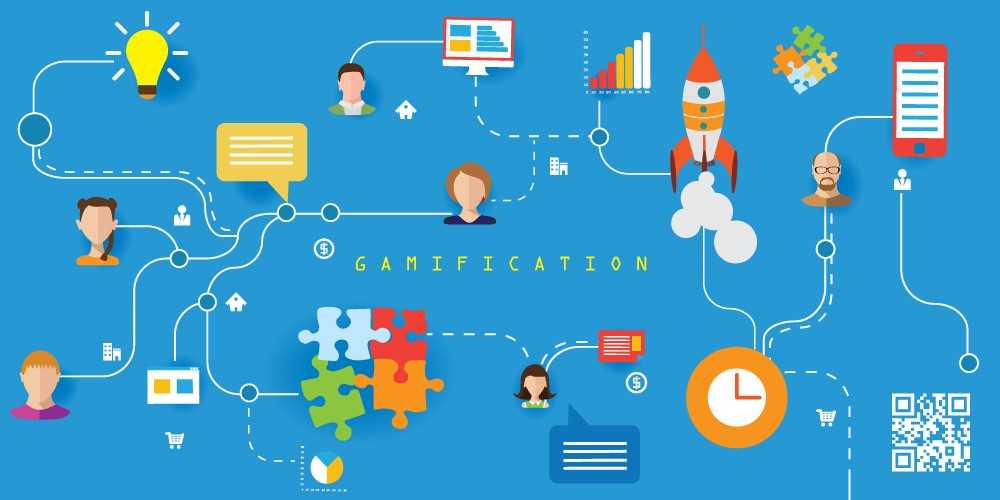 Bill Gates once said that personal computers are “the most empowering tool we’ve ever created. They’re tools of communications, they’re tools of creativity, and they can be shaped by their user.” This is how people use computers and all the technologies that computers have spawned in the 21st century. Yet digital signage often lags behind the consumer experience because it’s not used to its fullest potential — especially not in terms of gamification.

Digital signage is so much more than just electronic posters. It’s a communications tool to inform people of things, but also to motivate them, to affect human behavior.

Even though it appears at first glance to be a push method, it’s actually a two-way system: the organization communicates and motivates, and the audience responds in some way.

When they go to public areas, there are often interactive screens to help them find or learn things. People use apps to rent bicycles, scooters and cars; make reservations; get traffic and transit info and much more.

So then, why should the digital signs at their workplace, school or university be just an inert thing that tosses information nuggets at them and nothing else?

That’s not an effective way to use this technology.

The fact is that pretty much everyone is walking around with a mobile device of some sort, and they will pull it out to find what they need or want, or just to kill time, unless you get them actively, even eagerly, watching your screens.

This is where gamification comes in. This is not just something for children, or something silly for non-essential communications. Gamification is a way to ensure that the messages and campaigns you’ve spent so much time developing, creating and scheduling are truly engaging your audiences.

It’s how you make your screens an essential part of the employee/student/visitor experience of being in your facility and being a part of your culture. Don’t think that because the word “game” is part of the term that this is something frivolous. It’s not.

The term “gamification” really took off in 2010. Essentially, it means taking game-like elements and adding them to non-game contexts. A game must have clear rules, a set time period, and a way to “win” or at least achieve progress.

Ways of marking progress and in-game behavior include:

The people managing the game need to know who is playing, so they can keep track of each player’s progress and determine when someone has achieved success conditions.

The idea is, that by making a series of tasks look and feel more like a game of some kind, people are more likely to complete the tasks. They might even enjoy it to the point where they look forward to their next series of tasks.

A well-known example is the San Francisco-based company Fitbit. They make wearable, wireless-enabled activity tracking devices that measure how many steps a person takes, quality of sleep, steps climbed, and other metrics related to physical fitness and health. 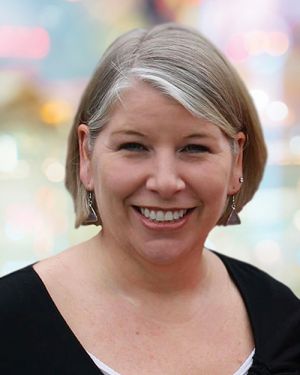 Devices like Fitbit have gamified fitness, by making it fun for people to do something as simple as go for a walk. People will take the stairs rather than wait for an elevator so they can reach their goal each day.

It sure is popular. Fitness trackers like this saw 55 million units sold worldwide in 2016 and will reach more than 105 million per year by 2022. Fitbit alone saw revenues rise from $5 million in 2010 to $1.8 billion just five years later.

It’s also social. People create groups – challenging each other to compete with one another, or to join teams to compete against other teams. The rewards are virtual (competition and kudos), as well as physical (they took XX number of steps in a day, which improves their health).

In more abstracted settings, organizations have been highly successful at using gamification techniques to gain benefits. Gartner conducted a study not that long ago that found companies that use gamification have 250% higher growth than those that don’t.

The Aberdeen Group also conducted a study, and found that good gamification in companies leads to a workforce that’s 48% more engaged, and 35% less employee turnover.

So how can this apply to digital signs? Digital signage managers already work to present information as visually as possible. A graph or other data visualization can convey quite a lot of data very quickly to an audience that is doing other things and doesn’t have the time or inclination to hang out in front of a screen for minutes at a time.

Showing progress towards goals, whether it’s teams or departments or the organization as a whole, makes people feel like they’re being kept in the loop.

Showing current trends in your industry (or how your school ranks against others in the region) also helps foster a sense of low-level competition that can be surprisingly motivating. This is all useful stuff, but it’s not really gamification.

To gamify your digital signage messages, you need to create active competition. Get departments to compete against one another towards similar goals. 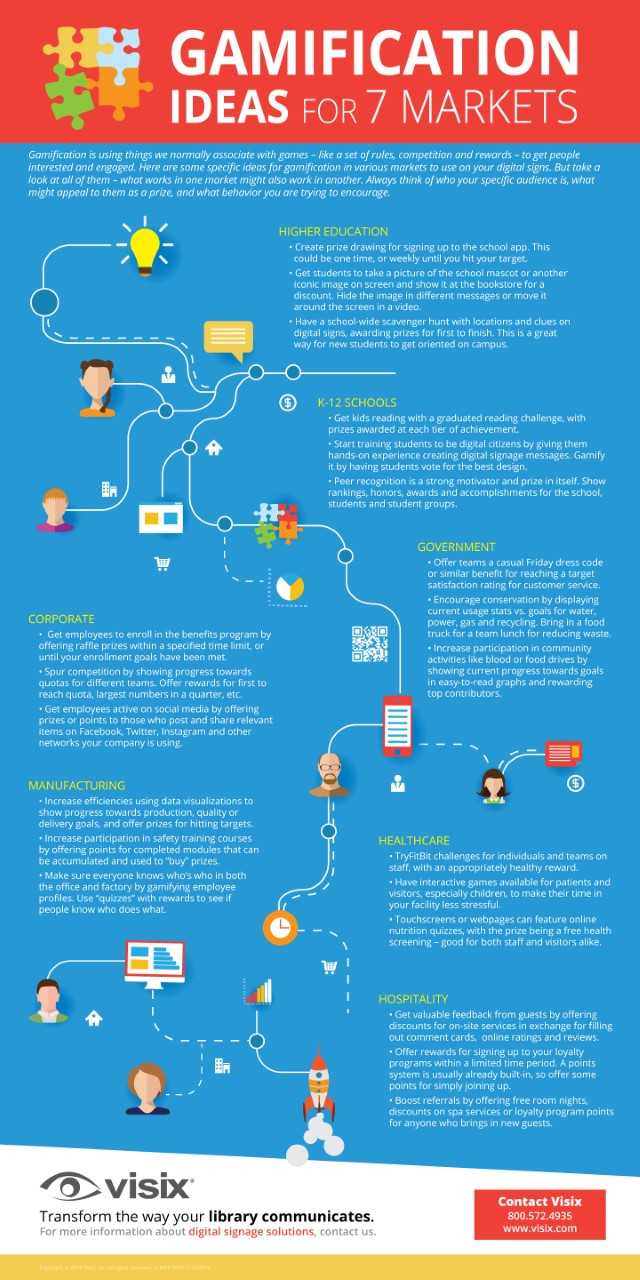 You can award points, or badges, or other game design elements, as a way of keeping score and letting people know how they’re doing. Get employees to promote your products and services (or school clubs or whatever makes sense for your particular organization) on social media using a dedicated hashtag, so you can track it easily.

You can augment training using gamification as well. Microlearning is a great way to make keeping up to date on policies and procedures just part of the daily routine. Reinforce with quick quizzes on

your digital signs – give people a QR code or short URL to take them to a webpage where they can answer three or four questions. Or have them text their answers to a dedicated phone number.

You have to give some sort of reward for it to be true gamification. This need not be something extravagant. Studies have shown that people will often participate in gamified initiatives mainly for the fun of it, but the addition of a prize can help attract those who are less inclined to join in.

Rewards could be a gift card, or the ability to “cash in” points earned at a shop or online, or top performers can be entered into a raffle for a high-value prize. How about treating the winners to lunch, or bringing in a food truck for the highest-ranking department?

Some organizations even give intangible prizes, like extra PTO. For example, getting to level three in the gamified initiative earns you 15 minutes extra PTO, level seven gets you another 15 minutes, and so on. Eventually, you’ve earned an extra day off.

Make the rewards enticing. Bad prizes can actually demotivate. People who might normally have participated simply for the fun of it sometimes won’t do so if the prize is seen as cheap or irrelevant. Make it something they want.

And if you aren’t sure what they want, try asking them. You’ll often find that want they really want is easy for your organization to provide and costs little or no money.

Just be prompt when giving our rewards and prizes. Ending a two-week gamified initiative but then taking five weeks to give out the prizes will not encourage people to participate again.

Show progress and leaderboards, and trumpet the successes. Mention winners on your digital signs. Every goal reached and every winner spotlighted is an advertisement for the next game. People love to see themselves on screen, and are sure to be looking at your digital signs if you tell that that’s where the winners will be announced.

And make it easy for people to participate. It’s a game, and people want play, not work. Don’t have five complicated steps, and make tracking progress simple or automated. Make sure they can play the game as soon as they see the message.

Gamification also has ROI built right in. You can directly measure how effective your campaign is by how many people play the game. As with all ROI, have a specific goal in mind before running the game; the more specific, the better.

For example, “We are dedicated to sustainability” is too vague and there’s nothing there for people to do. “Reduce paper usage by 25% in the next seven days” gives people a tangible goal, and allows you to gamify the initiative by tracking departments’ paper usage and declaring a winner at week’s end.

Do not, however, make participation mandatory. Whoever heard of people being forced to play a game? Make it voluntary, make it fun, create buzz, reward well and promptly, show progress, and let people know you created the game in the first place.

Do all this, and you can be running a couple of different kinds of games a week, getting people engaged, even excited, to be looking at your digital signage messages. Plus, they’re changing their behavior in the way you wanted them to.

Players win because it’s fun to participate; winners win because they get a reward; and the organization wins because people are paying attention to communications, are actively engaged, and are working toward a goal that’s important to your organization. So, in gamification, everybody wins.