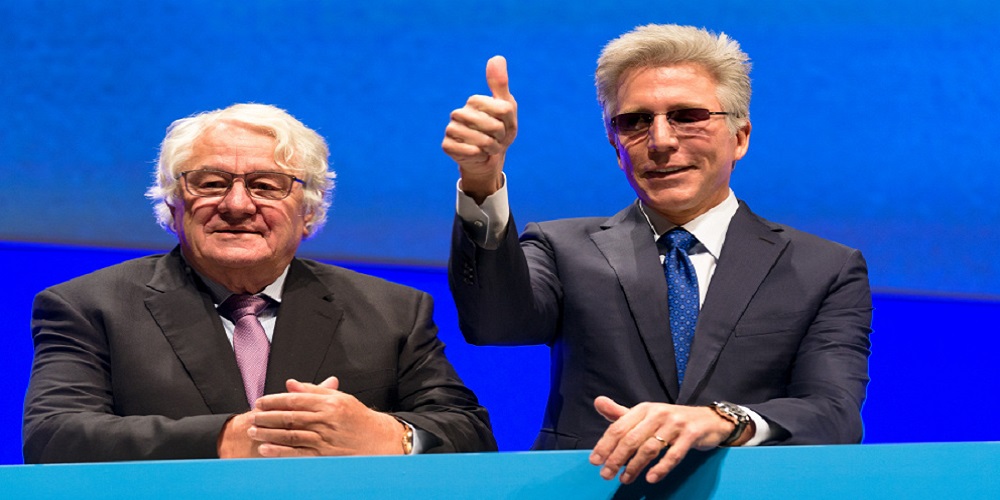 Hasso Plattner, Chairman of the Supervisory Board of SAP SE and Bill McDermott (from left)

McDermott joined the firm in 2002 as head of North America, where he worked to increase the company’s market share on the continent and helping to grow the company into a $156 billion software conglomerate.

He joined the executive board in 2008 as he began to lead customer operations worldwide. He’s served as CEO for the last decade.

McDermott is credited with the company’s growth, including expanding its portfolio and overseeing a major shift to cloud computing. Market value, revenue, profits, employee engagement and environmental sustainability have all strengthened under McDermott, the company said.

SAP Executive Board members Jennifer Morgan and Christian Klein have been appointed co-chief executive officers while McDermott remains in an advisory capacity until the end of the year.

“Now is the moment for everyone to begin an exciting new chapter, and I am confident that Jennifer and Christian will do an outstanding job,” McDermott said. “I look forward to supporting them as they finish 2019 and lay the foundation for 2020 and beyond.”

According to a company press release, the move has been at least a year in the making.

Prof. Hasso Plattner, chairman of the company’s supervisory board, said in a statement he and McDermott began grooming Morgan and Klein over a year ago to be SAP’s next generation of leaders.

“We are confident in their vision and capabilities as we take SAP to its next phase of growth and innovation,” Plattner said.

Bloomberg Opinion Columnist Alex Webb said Klein, the chief operating officer is expected to deliver on profit goals while Morgan — the former president of the Cloud Business Group —has the cloud experience necessary to push the tech behemoth into more cloud-based technologies.

“Having been later than some U.S. competitors to pivot toward a cloud-based business, SAP is now migrating its customers away from software run on their own premises, and into its cloud offerings,” Webb wrote.

Simultaneous to the company’s announcement, SAP released preliminary third-quarter results, which reflected an improved cloud revenue base. New cloud bookings were up 38% and cloud revenue was up 37%.