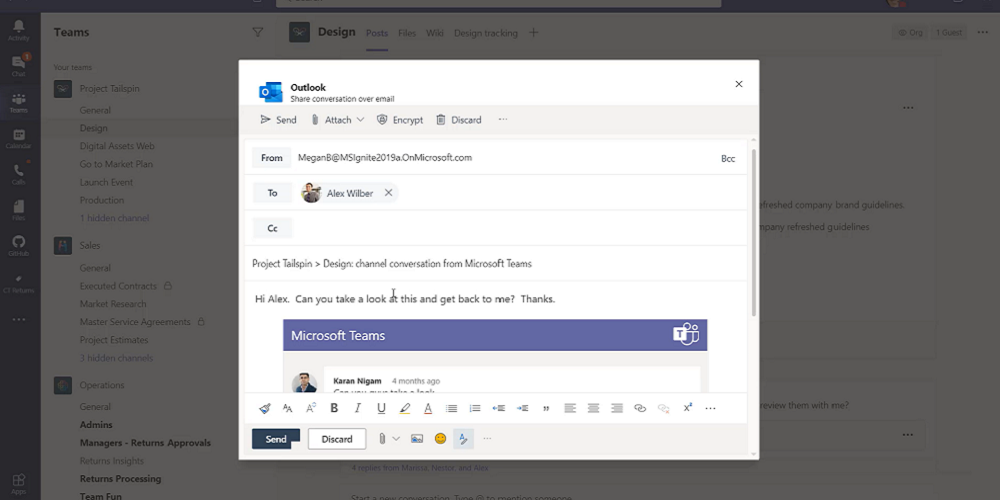 In a blog post last week, the company highlighted the new features that are either already available or are set to become available shortly.

This month users will be able to do the opposite and move Outlook conversations and associated attachments into a Teams chat.

“Teams is the hub for getting work done with your team—but we know that that is not the only way people communicate,” the company said in the post. “We have built this new integration between Outlook and Teams to make it easy to collaborate no matter where the conversation is taking place.”

Also new in teams is a new targeted communication feature that allows users to message everyone assigned to a specific tag at the same time. This allows admins to organize users based on a common attribute, like a role, project or location, according to the company.

Users can also begin their Teams experience with the creation of an organization-wide team. New customers with fewer than 5,000 users will start with that model, the company said.

Read Next: Microsoft Expands NFL Partnership to Include Teams

Also new to Teams is a new experience in the File tab of a channel that includes the ability to sync files to your computer, see previews across more than 320 file types, work with metadata, see document life-cycle signals, review on-hover file cards, pin files to the top and other features.

Meeting recordings and IT management

Other new features include the ability to store meeting recordings in-region when Stream service is not available in the corresponding Go Local region. Cloud recording will be enabled by default which ill store the recordings in the respective in-region data center.

Also new is the Teams Admin Center that allows IT staff to see all available apps in the tenant, which helps them decide which apps to enable for their organization. It’s designed for streamline the process of testing and distributing line-of-business apps, Microsoft said.