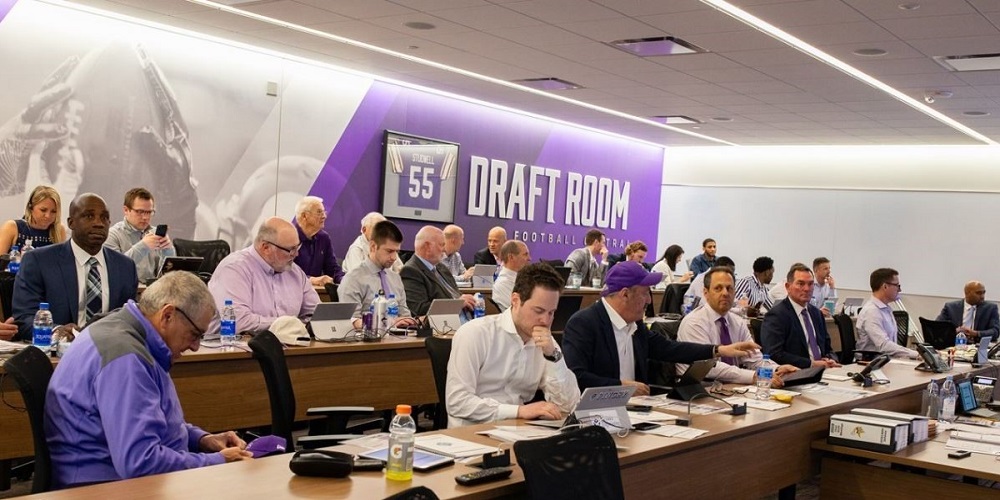 The Minnesota Vikings' staff during the NFL Draft. Courtesy/Microsoft

If you’re an NFL fan like me, you’ve probably seen coaches and personnel on the sidelines during games and practices using Microsoft Surface tablets to draw up plays and review game footage.

It’s been well received by the league and part of an ongoing partnership since 2013 that Microsoft likes to promote and one that has grown to include more than 2,000 Surface devices and 170 Windows Servers in 35 global stadiums.

The Surface has been a useful tool for, well, most people.

HE PICKED IT UP JUST TO THROW IT AGAIN pic.twitter.com/x2s79CSgLz

Today, Microsoft announced an expansion of that partnership that includes the continued use of Surface devices and now Microsoft Teams, the company’s unified communication and collaboration solution.

“With Microsoft Teams, we’ll empower the league and the individual NFL teams with technology to facilitate collaboration and creativity,” said Yusuf Mehdi, a Microsoft corporate vice president, in a blog post. “The combination of Surface and Microsoft Teams will allow us, in partnership with the NFL, to continue to innovate for our collective fans.”

Launched nearly three years ago, and more than 20 million daily users strong, Microsoft Teams was designed to empower people to get more done together, with less friction and more human connection. Nowhere is the need for teamwork like this greater than in the fast-paced, global game of NFL football.

Rather than using separate apps for chat, calling, meetings, and document collaboration, with Microsoft Teams the NFL can stay constantly and securely connected in one hub for teamwork across all their devices, including Windows, Mac, iOS, and Android.

According to Medhi, teams are already starting to make use of Teams in their day-to-day operations:

This gives Teams a big win as Microsoft hopes to continue to outpace Slack in terms of daily users.

However, Slack has also been winning big clients. Most notable was IBM, which chose the platform last month for 350,000 employees after a trial run with the collaboration tool.