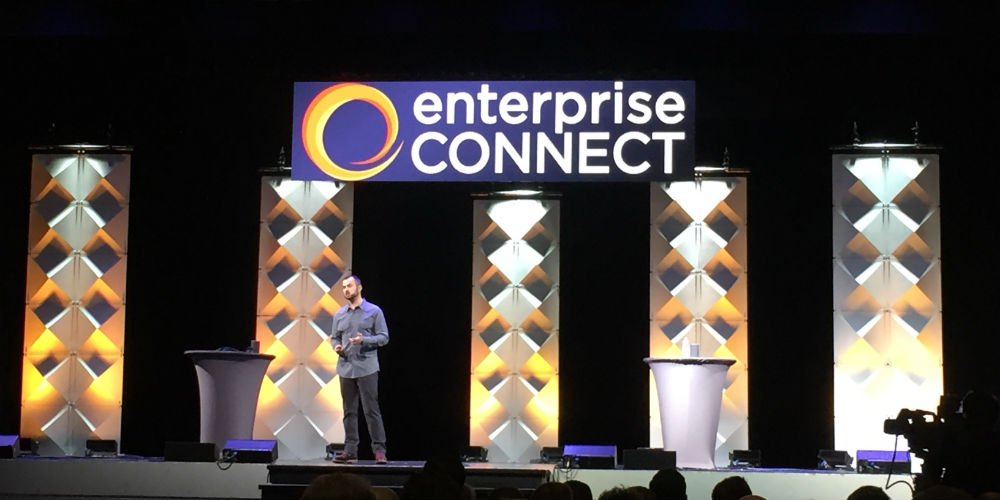 At Enterprise Connect 2018, Amazon Web Services (AWS) used the time for their keynote on something the company has been touting for quite some time: voice. This time they aren’t focusing on the consumer market, however. AWS is planning on bringing Alexa for Business to enterprises everywhere.

“How many people here, last night or this morning, called out to Alexa in their hotel room?” asks David Isbitski, Chief Evangelist for Alexa and Echo at Amazon. Not very many hands were raised in audience at the Enterprise Connect 2018 AWS keynote. That’s because the Amazon Echo isn’t considered a mobile device – it’s intended use for the majority of consumers exists in the home.

While the Amazon Echo is utilized in millions of homes around the world, there have been few reasons to bring Alexa into the office to date. AWS hopes to change that with its new offering, Alexa for Business. Amazon Web Services wants you to be able to ask Alexa to start a meeting or turn off the projector in your conference room or how your sales projections are doing.

It can enable such actions now thanks to advancements in Natural Language Understanding (NLU). The way to think about Alexa is as an interface. You can use it on the Echo or your mobile device. It’s a way for you to communicate with technology in your day-to-day life. So it only makes sense that it should be brought into the workplace with you.

Alexa for Business in the Workplace

“Alexa for Business got started in a conference room,” says Davis. “A number of colleagues and I were sitting around the table, and a colleague pulled out his phone, and we were trying to find a meeting on the system. He pulled up his calendar, found the meeting that we were in, and started to transpose the meeting on the four-inch screen to the touchscreen on the table. Then someone joked in the room, saying ‘Alexa start the meeting.’

“We looked at each other and laughed, but then we realized that it was a really good idea, and we should go build it. So we did.” The team built a prototype, hooked it up to their AV system, and realized how beneficial it was to be able to tell the room to start the meeting. So they turned the prototype into the product being show at the EC18 keynote.

By applying the AWS expertise managing cloud workloads and applying it to Alexa, the team was able to create a sophisticated platform for voice in the office. It opens up another dimension of multitasking. You can get information without losing focus, such as asking Alexa how many deals were closed in the last quarter. You can even build private skills specific to your company.

You build private skills the same way as public skills, and just publish it only to your organization, or specific employees, or specific rooms. Some companies deploy them to factory floors and warehouses for employees to move a process down the line hands-free. Some customers have built private flash-briefings to provide announcements and company updates along with regular news and weather updates provided by Alexa. Skills can be hosted in Lambda, Amazon Web Service’s serverless repository, or on their own internal systems.

Amazon Connect, the AWS contact center service, can integrate with Alexa for Business through a skill that makes it easier for agents and customers to stay in touch. Collin demonstrated asking Alexa to have the call center contact him. He told Alexa that he’s locked out of his account, and seconds later he received a phone call from the call center and is connected to an agent.

AWS also built a smart conferencing API. When you walk into the room and say start the meeting, the meeting starts. Alexa looks at the schedule to see what the meeting is and turns on the appropriate systems necessary for that meeting.

Collin demonstrated a meeting onstage – he asked Alexa to join and the system auto-input the pin code and connected. During the videoconference meeting he asked Alexa for a status report on the call center and she automatically broke down the information thanks to another API. Alexa for Business can connect to any service that includes a dial-in option – the demo onstage utilized Polycom for videoconferencing.

A Timer skill can ensure that the meeting is run on schedule and doesn’t go overboard. An Action Items skill can allow Alexa to track action items and email them to the team after the meeting. The Team skill can manage meeting schedules to let users know which rooms are available. Don’t forget, your organization can build any skill needed to fit your company’s specific needs.

Amazon Web Services doesn’t want you to change your infrastructure, the company just wants you to augment your systems with voice. Alexa voice services are well known in the consumer space, but we’re just starting to see Alexa embedded into hardware meant for business. That’s changing. Polycom is building Alexa into the Trio line of hardware, for instance. AWS has a Partner Network focused on helping APN Partners build successful AWS-based businesses or solutions by providing business, technical, marketing, and go-to-market support.

Voice has quickly become a necessary capability of technology, and that doesn’t change when you enter the workplace. It will be interesting to see how the technology giant is able to do for enterprise what it’s already done for the home.