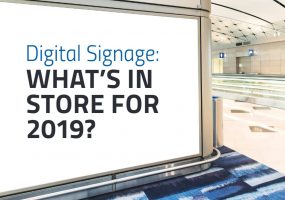 Watch These 6 Digital Signage Trends in 2019

Digital Signage Expo 2017 was a record-setting show that saw it’s largest end user audience ever. If you were one of the end users not at the show, here are twelve products you may have missed from DSE 2017.

The most innovative digital signage installations were honored at 2016 Digital Signage Expo. Second Story, part of Sapient Nitro, has won Apex Installation of the Year.

What does Digital Signage Expo offer to the attendees? Penny Carter explains what she’s looking forward to at the show.

Among an extensive show floor and numerous educational opportunities, here are some reasons why higher education decision makers should attended the Digital Signage Expo 2016.

Here’s a look at 9 announcements and events that happened at DSE 2015.

DSE will offer 109 sessions and seminars to educate show attendees.

4K and Beyond: What’s in Store for Digital Signage Expo 2015?

Producer of Digital Signage Expo (DSE) 2015 gives CI a teaser of what you’ll find at the March 10-12 event in Las Vegas.