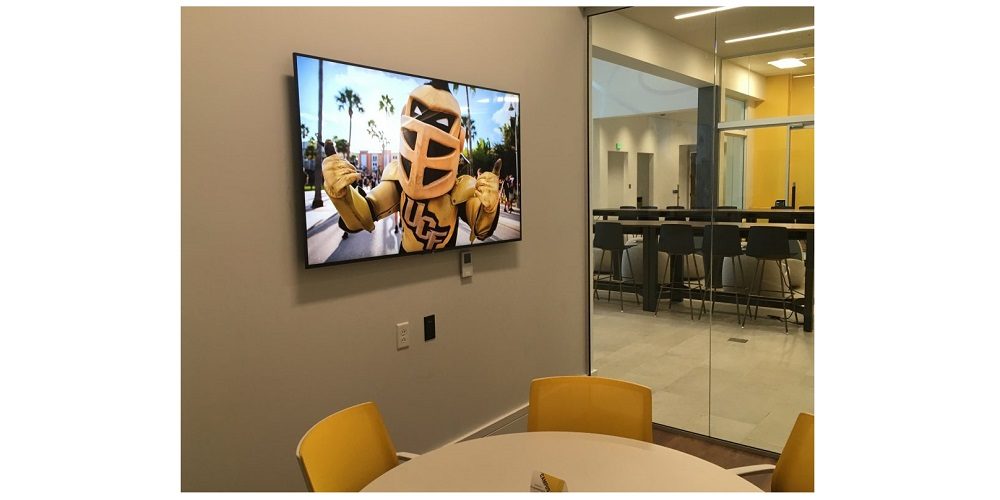 University of Central Florida’s new UCF Downtown 15-acre campus, located in Orlando’s Creative Village, incorporates the latest audio-visual innovations into a sleek but welcoming environment for 21st century learning. Thanks in part to its thoughtful integration of technology with design, UCF was among the top 20 most applied to colleges in 2019, according to Niche.com.

The design of the school reflects its overall commitment to collaborative learning.

When a student walks into the main building of the downtown campus, the Dr. Phillip’s Academic Commons (DPAC), they’re greeted by several 55-inch Sony BRAVIA 4K HDR professional displays – one in each of the breakout rooms.

Students using these spaces can plug into the displays via an HDMI pass-through and share content with the rest of their study group as they work.

Over 120 Sony BRAVIA displays are installed within the four UCF buildings in downtown Orlando for signage, study rooms, conference rooms, and classrooms.

A short time after installation, UCF brought a use-case desire to modify the way the display’s sleep mode and screensaver operates to Sony’s attention.

What the school wanted was a display that was plug and play. In other words, they wanted the display to automatically detect when an HDMI input signal was detected and “wake up” from Sleep or Screen-saver mode, and automatically switch to the active HDMI input.

Likewise, the display would automatically power down or revert to running a customized screensaver when the HDMI signal was disconnected, until another device plugged into its HDMI interface and woke it up again.

Sony presented two options. The displays could be set to Wake on Signal and run in “Pro Mode”, which would automatically wake the display when it detected a signal on its HDMI. Or, they could use the BRAVIA Meeting Free, which is an embedded app that is also enabled within the Pro Settings menu of the display.

The BRAVIA Meeting Free app allows the user to customize the home screen and provides the ability to have an active Standby screen when the display is not in use.

While the above two options met UCF’s use-case, they wanted to take the functionality one step further.

In order to promote events at the school, and for a better overall look in the building’s interior, UCF wanted to run school informational and promotional slides as the Standby screen while displays were inactive.

This solution met UCF’s desired use-case and they chose to deploy the BRAVIA Meeting Free application across all of the displays in the DPAC.

The ease of students sharing their work and the ability to have dynamic visuals running while the displays were inactive was exactly the vision UCF desired for the area.

According to Merritt, two key tenants of the school’s modern downtown campus are to discover new ways of doing business as well as new designs for multimedia.

“We’re always looking for new ways to support the activities that our faculty and students want to do,” he says.

“One of the things I’m looking forward to is seeing how a dynamic display impacts the ideas that our students come up with on how to use these things in the first place. I think we as technology people often make assumptions about how non-tech people are going to use devices and systems that we’ve put into place.

“A lot of times we see them using them in ways we didn’t anticipate. I’m very excited to see what people will do with these systems once they look like living, active displays, instead of just the big black monoliths that were hanging on the walls. I’m looking forward to being surprised,” he says.

The current slides running when the displays are inactive, Pritchett calls “proof of concept,” but he foresees including information for students on where to get help, how to schedule the breakout rooms, and videos that highlight services available to students on the new campus.

Because the displays are very easy to use and all the inputs are within reach, there’s much less worry about them being broken. Students plug in their laptop to the HDMI that automatically selects the source and it shows their laptop on the TV.

This eliminates the need for the IR remote control, which would potentially get lost and require a call for support.

UCF also took advantage of BRAVIA’s Power Scheduler enabling the displays to be turned off at night, and on in the morning, which conserves energy and extends the life of the units. It also saves on time since no one must physically go to each display to turn them on and off.

“The BRAVIA Meeting Free app really automates the support and usage of these displays to a much greater degree than just using the screen saver app,” said Merritt.

UCF has standardized on Sony displays and projectors for nearly all the school’s multimedia projects.

“With DPAC’s glass walls, they were visible from the outside. The ‘big black rectangle’ hanging on the wall didn’t present an interesting look as you walk into the impressive lobby of DPAC.

“We’ve used other manufacturers in other spaces, but this is the first time we found a way to improve the visual engagement with the displays when they weren’t being used.”

“Previously, some of the displays would show the status, like HDMI-2, on the screen, and it just didn’t look good,” said Scott Pritchett, Manager of Multimedia Services, UCF.

“Now, as soon as I enter in the morning, the active screens really enhance the overall look of the building.”

Merritt and Pritchett say they’ve received a good deal of positive feedback on how the BRAVIA displays add to the attractiveness of the lobby area.

The support the school’s received from Sony has been noteworthy, said Merritt.

“We’re trying something new and interesting with our displays in what’s a new and interesting downtown campus. We all appreciated how willing Sony’s BRAVIA Professional Display group was to work with us all along the way. They’ve shown us new ways of using the displays that are even more beneficial than we first thought – and with no additional hardware, just the displays themselves.”