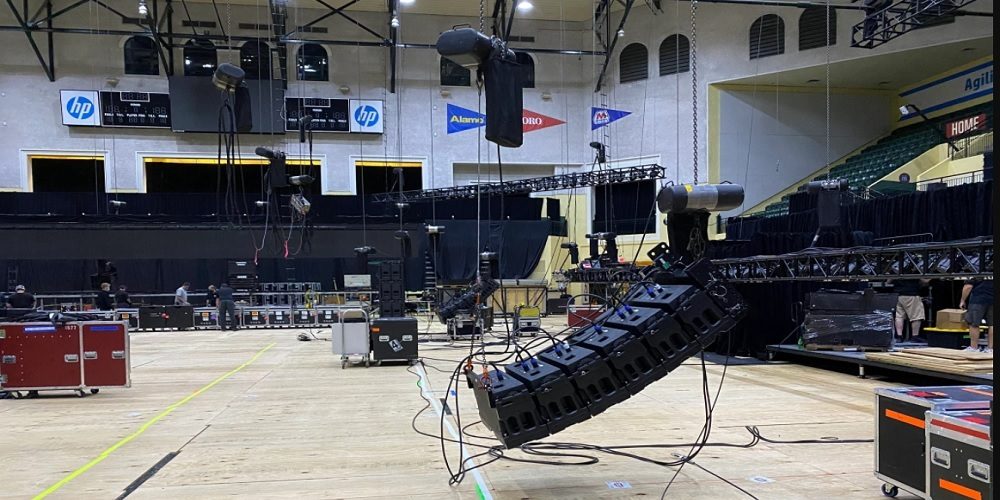 Due to restrictions on large gatherings related to COVID-19, the NBA decided to proceed with the 2019-20 season without fans present. To safely accommodate players, staff and support crews, the NBA set up a strict isolation “bubble” at the ESPN Wide World of Sports Complex at Walt Disney World.

To ensure uncompromised, high-impact sound for the dramatically reduced crowds, NBA officials turned to Firehouse Productions, who have been providing sound reinforcement for NBA games for more than a decade.

“The NBA has a very strict 85 dB limit on the PA system, so intelligibility becomes everything,” says Mark Dittmar, Vice President, Firehouse Productions.

“When you can go up to 100 dB, you don’t need as much intelligibility, because you can just turn it up and people can hear it. When you have an 85 dB limit, that’s a very different game. You need to be intelligible above the audience sound.”

The three-way design and Radiation Boundary Integrator waveguide provide broad coverage for the audience while preventing sound from bleeding onto the court, which had its own sound system.

“For most of my shows, and for the NBA in particular, I’ve been using JBL VTX V20 loudspeakers for a number of years,” says Dittmar.

“With their intelligibility, size and power factor, they’re just spectacular. The 105-degree pattern really lets me cover a lot, and they sound great. Part of what I like about JBL is that it’s very consistent and reliable for me. I don’t have to worry about intelligibility or things like that, so I don’t have to get into a complicated design. I like to keep it very, very simple.”

Designed specifically for use with VTX V20 line array elements, VTX S25 subwoofers can easily be arrayed in a cardioid configuration to prevent low-frequency spillage outside the coverage zone.

“The subs are my favorite thing out there,” added Dittmar.

“Up until I saw this product, I hated 15-inch subs. Then the S25 came out, and I don’t know what they did or how they did it, but it’s a huge amount of power in a very small package. I use it all the time. It’s designed to work with the V20s, and it’s got way more low-end than any double 15 I’ve ever worked with in my life.”

Network connectivity via HiQnet and Ethernet protocols provides a high degree of control and real-time diagnostics.

The Impact of the JBL VTX System

Having provided sound reinforcement for NBA games and all-star events for the past 10 years, Firehouse Productions maintains a solid working relationship with the organization.

It’s this mutual trust, Dittmar says, that allowed his team to react quickly to the unique situation, designing and deploying the sound system in a short time frame with outstanding results.

Read Next: How to Achieve the Best Audio for Guest Speakers

“I’ve got a very long-standing relationship with them, and a heck of a lot of trust,” Dittmar says of the NBA.

“If I say something, that’s what I’m going to deliver. If they tell me something, that’s not just them making up an excuse or something. We have a very strong working relationship together, and that allows us to take complicated, fast-moving situations and get really great results.”