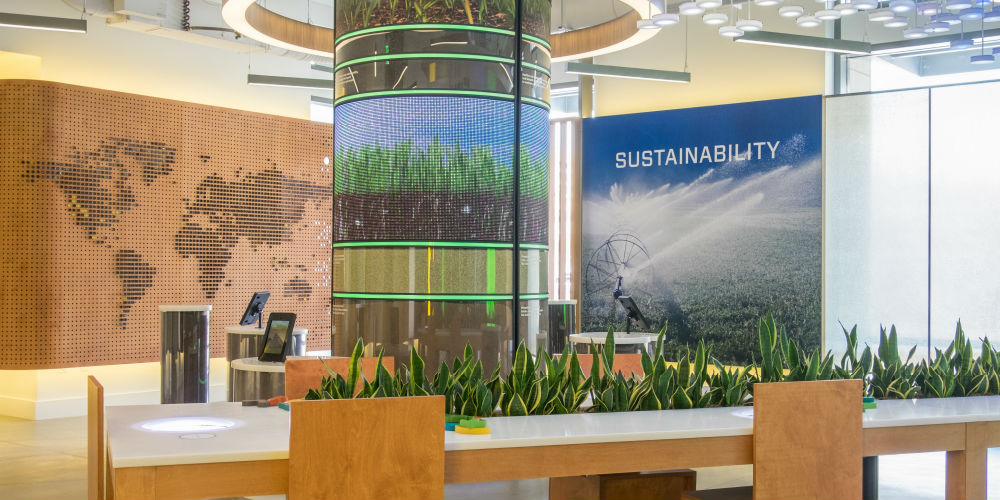 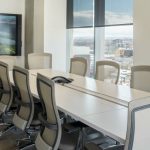 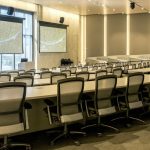 The J.R. Simplot Co. is one of Idaho’s largest and most well-known companies. In 2015, the company began construction on its new World Headquarters which sits on a 10-acre campus in downtown Boise.

The Simplot Company Headquarters is a nine-story building with an adjacent five story annex building. The two areas are connected by a two story sky-bridge. In total, the headquarters spans about 325,000 square feet.

Neurilink consulted Simplot on a small video conferencing system prior to their new building build-out. This was the first introduction and engagement between Neurilink and Simplot.

Neurilink was again connected with Simplot when meeting with the leadership group for a secondary community-focused building that would reside across the outdoor venue from the Simplot World Headquarters. The opportunity to engage with Simplot arose from this meeting.

After the meeting, the Simplot IT group reached out to Neurilink to create test rooms in their existing headquarters to vet new technologies. Neurilink began the design build process and modeled three different solutions in their existing office. End users were able to test the solutions, ask questions, and make recommendations on ease-of-use. Neurilink compiled the feedback and made the needed modifications to the conference room designs. From this testbed, Neurilink was able to set standard room types that would be deployed into the upcoming project.

The Simplot facility took a year and a half to install. Before starting the project, Neurilink developed test conference rooms for Simplot end-users in their existing space. Based on the feedback received, Neurilink was able to develop standardized room types with a consistent user experience from room to room.

Simplot’s space is unique in that, while most of the building caters to employees, the first floor features an expansive Customer Experience Center. This fully custom area includes a 360-degree direct view LED wrap, six integrated displays paired with current and historical photographs and a 25-foot interactive table which uses RFID tags to trigger specific videos.

Simplot Headquarters main auditorium features an intricate wood angled ceiling. The projectors are mounted just above the entrance doors to the auditorium and include an automatic lift to make cleaning and servicing easy. To match the overall room design, Neurilink worked with several trades to develop custom covers at the bottom of the projector lifts which camouflage the technology with the ceiling.

The auditorium includes three large-format projector screens which are all motorized and three large-format projectors. The presenter podium has laptop connections for simple meetings or the content can be run from the booth. Everything is Skype enabled, which is run from one of the two PCs in the room. Video control enables full production streaming with three cameras along with audio and content brought into the live stream.

Last are the large conference rooms with a single display. The room runs on a Crestron Control Panel and features a dedicated PC. The seven-inch touch panel on the table controls the space which includes in-ceiling speakers, suspended microphone arrays, Tesira Forte registered to Skype and display.

The Customer Experience Center on the first floor of the headquarters is a completely custom space focused around a Mini Auditorium, People Zone, The Land Zone, The Food Zone and The Science Zone.

Simplot’s Customer Experience Center is a completely custom area with different types of installations. The mini-auditorium features a 98-inch Planar 4K monitor with Brightsign monitor running historical slides. When pushed, a LED lit button begins playing the JR Simplot documentary for visitors. The People Zone features a custom wrap with photographs and interspersed displays with videos. The Food Zone is a large table space where, instead of a plate, visitors look through plate-shaped glass down to a flat panel display. There are various figurines with RFIDs that, when scanned, begin playing a video. The Land Zone features a Nanolumens DirectView LED wrap which visitors control with three iPads.

“Neurilink was a value added partner during the construction and implementation phase of our new Company Headquarter Building. They worked very well with us as a direct sub-contractor under Simplot yet blended seamlessly with the other subs under the direction of the General Contractor,” says Jeff Gerhardt, Workplace Engineer Manager.