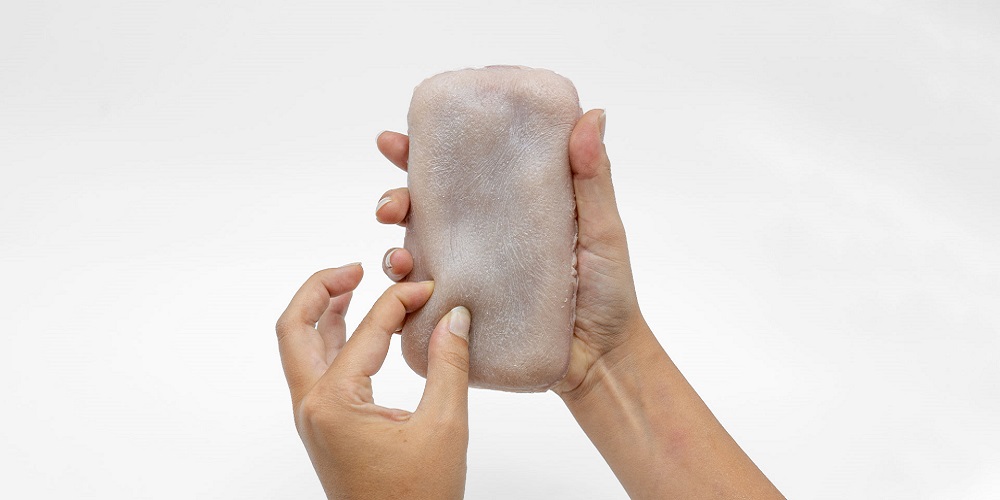 Our smartphones already come equipped with lovely virtual assistants that sound like real people, but just wait until we start making our devices feel more human.

Already, that feature is coming to our devices. Researcher Marc Teyssier, a Ph.D. student at Telecom ParisTech, is developing a terrifyingly realistic artificial skin interface for smartphones, laptops and other interactive devices.

The skin, dubbed Skin-On, responds to touch, pinching and tickling and is intended to mimic the way we interact with each other. The interface allows you to control aspects of your phone by touching the skin, like pinching the back of your phone to turn the volume up, using your finger as a joystick on a track pad and better grip detection, Teyssier’s website says.

There are two prototypes: one with a generally plain flat surface and another very realistic textured surface that resembles human skin. The skin is made of three layers with copper wire sandwiched between two layers of silicone.

Skin-On is programmed to associate certain gestures with certain emotions. Sudden hard pressure is associated with anger, tapping gets your device’s attention and sustained contact and stroking are associated with comfort.

Thankfully, this is just a project in development and not on the market. Like Teyssier’s other work, this is the stuff of nightmares. He apparently also wants to add hair and temperature features to the technology.

This is just weird and is obviously going to end up on a human-like robot or make someone literally fall in love with technology.

Actually, people already are trying to wife up virtual assistants like Siri and Alexa. What if you could touch them? Too bad for those folks, however, because the new are married now.

This idea is strange and unsettling and will lead to more stories of tech romances that nobody wants to hear.

We play with our smartphones and devices precisely because they aren’t humans, right? Call me old fashioned, but I like my cold, lifeless iPhone just the way it is. It doesn’t need to look like the back of my hand.