Artificial Intelligence is playing an ever-growing role in our everyday lives, so it should come as no surprise that it is already changing the way a workplace looks, feels and functions, across every industry.

To date, the most obvious uses of AI in the workplace have been in manufacturing operations, warehouses, and distribution centers. In each setting, robots are now handling much of the work that previously was done by humans. Although we, as humans, may find it unsettling, the reality is that robots work faster, are cheaper to operate, far more efficient (no need for breaks or days off), and less likely to make mistakes than their human counterparts.

While we’ve all seen photos of robotics being used on the assembly line or stacking products in a warehouse, it’s harder to imagine robots playing a role in a traditional office setting. In reality, though, mobile devices, video conferencing, and even virtual reality – all of which are powered by AI – are becoming commonplace in the office as an increasingly mobile workforce demands an agile, hyper-connected environment which supports their flexible approach to work. Design conversations that once started with discussions of walls and furniture now begin with technology and the necessity for everything else to be seamlessly integrated around it. 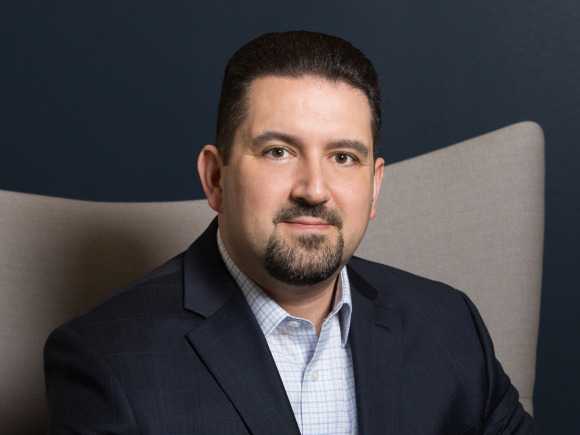 Rob Newell is Executive Vice President of Information Technology at dancker, a leading interior solutions firm working with clients to create spaces that maximize the flow between people and ideas by providing seamless integration of architectural, furniture, technology and logistics solutions.

As traditional 9-to-5 workdays become a thing of the past and employees – dominated by 20- and 30-somethings – increasingly work from remote locations using an array of smart devices, pressure will be on the interiors industry to create flexible work environments which enable staffers to work when and how they want (think standing desks, lounge chairs, huddle rooms, café spaces, and lots of technology) while collaborating in new and innovative ways, whether they’re face-to-face or far away.

To get some idea of what all of this means, think about the impact AI has already had on video meetings. Just a few years ago, video conference calls were initiated by plugging in a long series of conference codes. Eventually, a somewhat pixelated, oft interrupted image of the individual on the other end of the line appeared, with audio that was not only hard to hear but often out of synch with the visual.

In stark contrast, today’s voice-enabled AI allows users in multiple locations around the globe to start or join a meeting simply by uttering a command. AI voice-to-text transcription then identifies each speaker in the meeting while simultaneously taking notes, leaving participants free to concentrate on what is being said. AI is even being employed to analyze the behavior and performance of meeting participants, which potentially could be used in assessing customer reactions or improving sales techniques.

In the near future, video conferences will add the capability of sharing, manipulating, and even interacting with 3-D virtual holograms in real time. This AI-powered visualization will allow users not simply to see a virtual model of a specific product, but to actually try out that product in order to gauge for themselves how well it works and whether it will meet their specific needs.

Video conferences are only the tip of the iceberg for AI. Just as AI will allow for behavior analysis during conference calls, it can be employed by HR directors to gain insights into employee behavior, which in turn will influence how workplaces are designed. AI already allows businesses to merge data with employee calendars and emails to determine if existing office layouts are promoting collaboration. It is also helping companies to determine how quickly workers are completing certain tasks, and – through the use of sensors built into physical spaces – how workplace functionality can be improved to increase employee productivity and wellbeing, as well as optimize real estate assets.

For its part, the interiors industry is using AI to help businesses visualize workspace designs before construction begins or furnishings are purchased. More importantly, modifications can be made to the virtual designs, ensuring that workplace flexibility, employee collaboration, and worker satisfaction are all accounted for. The result is an improved workspace plan that can be more accurately priced and more rapidly built, in addition to a more functional final product.

Clearly, AI is already having a major impact on the way in which workplaces are designed. That impact is likely to become even more pronounced in the future as companies build new workspaces or rehab current spaces to accommodate a new breed of employees that demands an agile, flexible, and collaborative environment that is responsive to the wide range of ways in which they prefer to work.