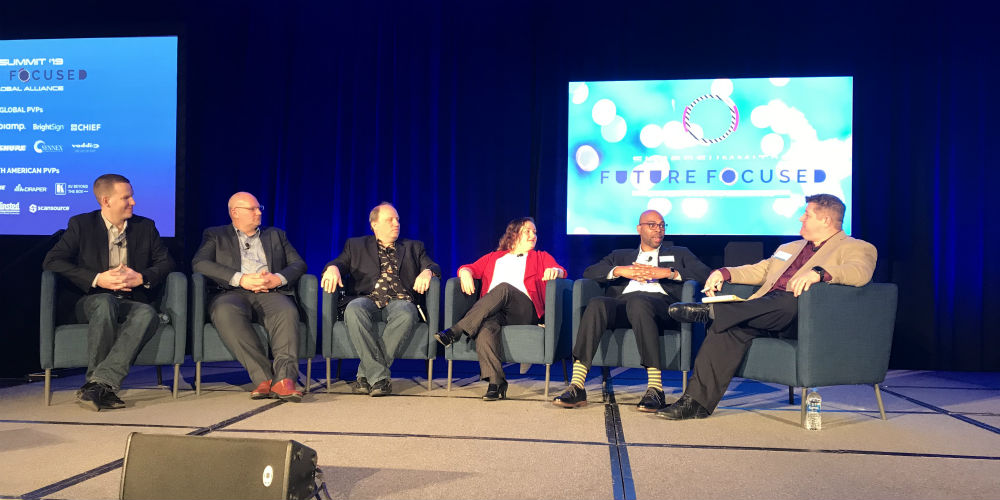 A word of warning to AV integrators who think they can impose their will on clients who come to them seeking help with their technology needs: your customers are becoming more knowledgeable than ever, and in many cases, have figured out how to make do without you.

And, if you are going to start pitching AV as a Service to your customers, make sure you know what that means and you’re ready to answer the tough questions that comes along with that offering.

If you think customers will wait until you’ve left the room to tell you what they think, you clearly weren’t at the PSNI Supersummit in Atlanta in February, where a panel of end users freely shared their thoughts on a host of topics, all while integrators took it in from the crowd.

“Are you really going to come to my campus and repair or replace 300 projectors when I need it? I don’t need someone to show me the latest and greatest. I’ve got 25 emails that already did it. You need to be able to quantify what you mean when you say ‘AV as a service’ so it becomes a capital expense rather than an operating expense.”

Nyere Hollingsworth, group leader at MITRE, was equally pessimistic about the future of AV as a service in its current form, although the phrase itself means different things to different people anyway.

“I’m hesitant to believe integrators have the capacity to provide the level of service they’re promising,” said Hollingsworth during the PSNI panel discussion.

There’s a bit of a paradox inherent in AV as a service, said Nick Miller, manager of AV control systems operations at Watermark Estate Management Services.

Bradford Benn, a 30-plus-year AV industry veteran who became an end user in the theme park industry in 2018, says the nature of the industry in which he works necessitates keeping AV as a service capabilities in-house, because a broken attraction means lost revenue until it’s fixed.

Don’t let all that venom fool you, though, because these same end users who talked about why and how they don’t need AV integrators to meet their needs also looked at the qualities they seek when they do want one to come to their campus, theme park, government facility, etc.

“I hire people, not shirts,” said Hollingsworth. “First and foremost, be honest. Don’t try to sell me a widget you just released at InfoComm and expect me to do the research for you. The folks I want to work with are the folks I’ve cultivated relationships with. If I know they’ll do well by me, I’ll bring them into the circle.”

Dawn Meade, senior AV solutions architect at Northrup Grunman, says her work with classified and sensitive government agencies means an increased level of scrutiny. That’s why she tends to rely on integrators she knows from her prior work, meaning she calls specific people rather than thinking solely about particular companies, no matter how large they might be.

“We’ll follow them because we know they do quality work,” said Meade. “It’s not the company. It’s the people. You can do a lot of damage with one bad seed.”

Benn knows right away to walk away when an integrator tells him about clients that are signed to non-disclosure agreements, since many of the projects he’s hiring for are in the same position.

“That tells me an awful lot about whether we can trust you,” he said. “Also, don’t call us for an order. Call us with a solution. Be proactive. Don’t make me have to go and find the problem. My job is to make my vendors succeed.”

Way knows there are some integrators who are more interested in making a sale than listening to what he needs from them. He recalled a recent example of an integrator who sent him a wine basket, despite the fact he works on a “dry” Christian campus.

“When you get to know me, you can get to know my organization and my needs,” he said. “We don’t need the same services. We need people who come in to support the things we’re doing. We’re always going to pay for things that make my job easier.”