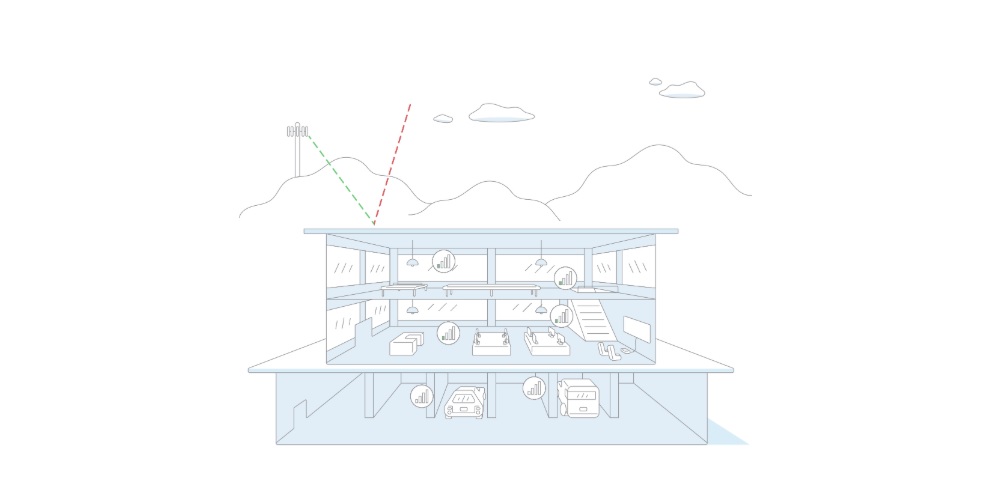 Everybody reading this has likely encountered a cell phone signal dead zone. But consider the impact poor cell reception has on every single employee and client inside of a hospital, corporate office, university, warehouse, or any large space with thick walls and windows — it’s a pretty significant disruption, especially considering how much we rely on mobile devices.

By far, the biggest reason users suffer from poor cell service has to do with the materials which coat the walls in large structures. They block carrier signals from entering the building, resulting in dropped calls and slowed browsing speeds, says Jake Kleiner, Director of Sales Enablement at Wilson Electronics.

In schools of all sizes, internally-cinderblocked walls and double-paned glass can cause around a 34-40% decrease in signal decibles, he says. Steel structures for corporate offices are a major blockade. In hospitals, there are X-Ray and other lab rooms with lead-lined walls.

What options do tech managers have for better cell service?

These systems are primarily only found in large-capacity situations and buildings. Every piece of technology in active distributed antenna systems has an “active” part which requires dedicated power and signaling.

This usually comes in the form of fiber optic cables which are used to send signals between a main source to remote notes placed throughout the building. It is through these nodes that the actual cell phone signal boosting tech is enabled.

These systems are immense, and as such, the amount of time and money an organization will need to invest in them is also immense. Consider these facts:

How to plan properly for Active Distributed Antenna Systems

Kleiner recommends IT and Technology Managers work closely with an FCC-approved integrator, and to choose integrators which have lots of large-scale project experience in the first place.

He also recommends they foster a close relationship with cell signal carriers, because in some cases, they’ve been known to fund specific applications.

Lastly, the importance of following Active DAS approval processes to the letter can not be overstated, Kleiner says.

The other cell signal boosting system is Passive DAS, and this is by far the more common type of system, simply due to its scale.

All Passive DAS equipment comes pre-certified by both the FCC and each individual cell signal carrier, meaning project compliance and approval are non-issues.

Passive DAS is designed for small- to medium-sized spaces, so it takes a much shorter amount of time to set up and much less money.

How to plan properly for Passive Distributed Antenna Systems

Kleiner recommends IT and Technology Managers work closely with integrators to determine what the actual coverage needs of a facility might be. Trusting the integration firm is key, for even the most experienced IT professionals may not have as much experience in this area as a systems integrator would.

Passive DAS can be expanded after the fact, so if as budgets become available, so too can more equipment and expanded coverage areas.

Lastly, if you’re in retail IT, consider that cell signal boosting technology has its advantages over setting up public WiFi networks. As popular retail stores continue to experience network-based hacks, the more secure option for your organization might be to give customers better cell reception rather than a network.

“My wife is a great example,” says Kleiner. “She’s a big shopper who loves taking her time in stores and opening up apps associated with them for coupons. She can’t always do this in stores with poor reception, but stores which do have it have the potential to earn more business by fostering connected customers.”