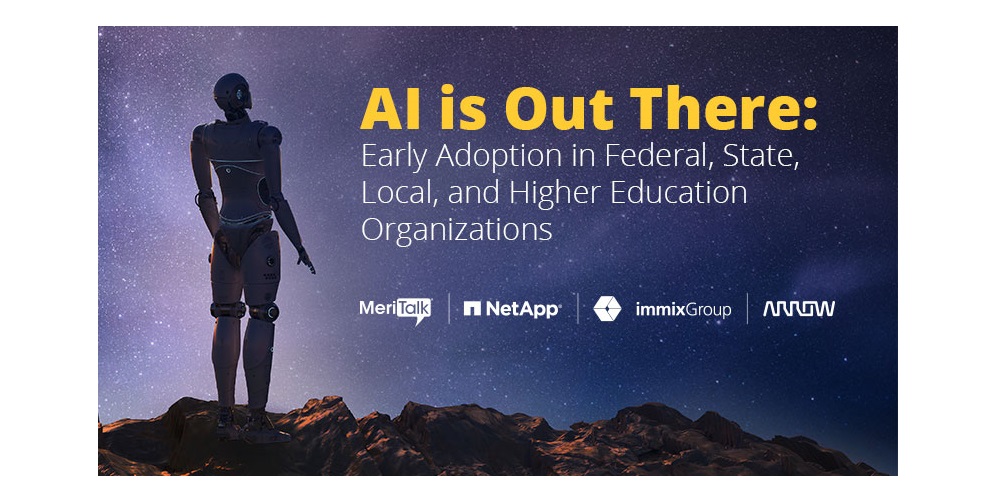 Where is artificial intelligence being used, really? A new report from MeriTalk, a public-private partnership focused on improving the outcomes of government IT, aims to address that.

“AI is Out There: Early Adoption in Federal, State, Local, and Higher Education Organizations,” was underwritten by Arrow and NetApp and surveyed 300 Federal, state, local, and higher education (SLED) IT managers to explore where they think their agencies are with Artificial Intelligence (AI) as a broader concept.

“Between February’s executive order and the launch of AI.gov in March, AI continues to gain traction in Federal agencies – with state and local governments, and higher education institutions feeling a similar pressure,” says a press release about the findings.

According to the study, almost all IT managers (90 percent) have sensed a shift in momentum toward the adoption and application of AI technologies in their organizations over the last two years.

Though government IT managers overwhelmingly agree a shift is taking place, only 14 percent say they have implemented and are currently benefiting from AI in their organizations today.

However, this technology may be more prevalent than it appears – 61 percent report benefiting from at least one foundational AI technology; voice assistants, high performance computing, and chatbots are all topping the list, the study says.

Government IT managers are confident

While AI adoption does come with uncertainties and challenges, more than half (54 percent) of Federal and SLED IT managers say they are optimistic about the prospect of adopting AI and most expect the technology to generate significant mission-focused benefits in the future.

More than three quarters (77 percent) view AI as an asset to their organization’s ability to deliver on its mission, and 85 percent agree AI will be a game changer in the way their industry thinks about and processes data, the study says.

Despite the optimistic outlook, no more than 15 percent of government IT professionals feel prepared to fully launch AI in their agencies today, according to the study.

When asked to prioritize, Federal IT managers cite talent and technology as the major roadblocks to AI expansion; state and local governments and higher education institutions cite technology and culture.

The study suggests that agencies and educational institutions have a limited amount of time left to prepare. AI technologies will likely become more prevalent in the near future – 73 percent say their organization will increase spending on AI this year, and 73 percent say they’ll increase the pace of adoption.

Government IT professionals agree that AI will become a cornerstone of their organization’s operations between 2020 and 2025.