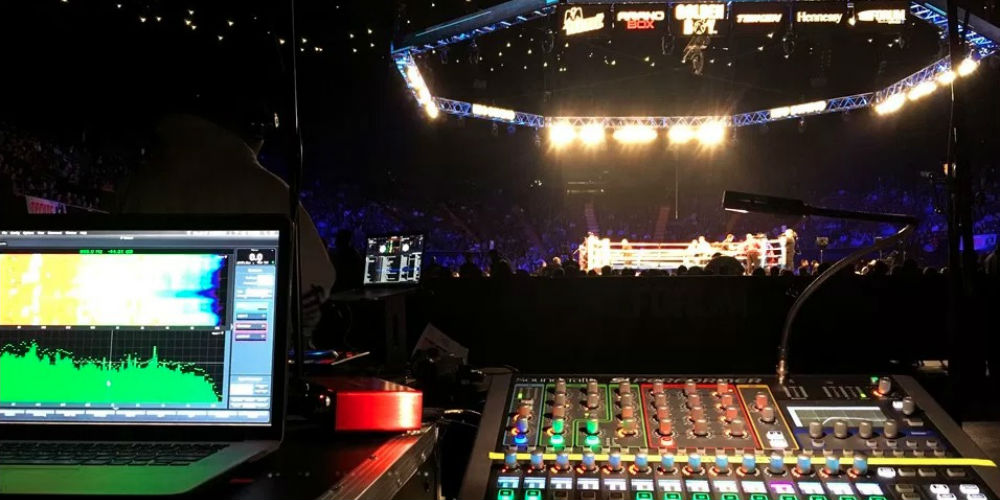 AVL chose the VUE al-8 line array system because of its size-to-performance ratio, the integrator says.

The company’s criteria for use in the Los Angeles Forum arena required a balance of intelligibility, directionality and sound pressure level (SPL) capabilities.

“Based on our experience of doing in-arena sound for boxing, I can hands-down say that the VUE system is the ideal fit for HBO Boxing,” boasts Dennis Layton, owner, Audio Video Live.

“The al-8’s clarity in the vocal range allows us to put the ring announcers’ voice out into the audience without disturbing the TV broadcast, yet they have enough punch to get the live audience off their seats during DJ sets.”

The company needed a system that could playback high SPLs of DJ entertainment, as well as spoken word from the ring announcer.

Inside the HBO Boxing After Dark Deployment

Supporting the boxing show’s audio needs, AVL installed a VUE system that included 32 medium-format al-8 elements in four hangs of eight, with a total eight al-8SB flyable subwoofers set on top of the hangs to augment the speakers’ low-frequency reproduction.

Through the use of the al-8s the hangs totaled 15 feet in length to provide enough room to work with the venue’s 30-foot clearance from the top of the lighting truss to the venue ceiling.

Rounding out the system, AVL employed VUEDrive system engines to power the speakers and to manage its processing needs. AVL also used SystemVUE for iOS for real-time monitoring and control during the show.

“There’s a simple reason why AVL continues to invest in the VUE line …  particularly the al-Class,” adds Layton.

“Regardless of the complexity or constraints of a project, the versatile VUE al-Class system can be easily configured to exceed even the toughest requirements and client expectations. And they just sound spectacular.”