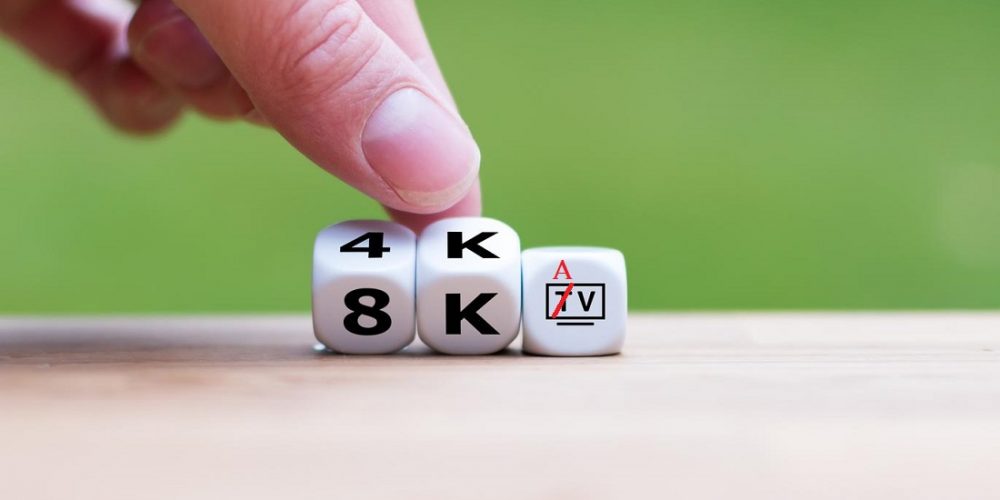 I recall reading about this in wonderment. After all, this was the dawn of 1080P full HD (remember the 720 lower resolution version in signals and displays?) and this was huge compared to our then standard definition television.

Many of us thought that 4K, let alone 8K, was a virtual pipe dream. Oh, how times have changed… and with 20/20 hindsight, I can argue things changed for the better.

By 2012, it was recommended as the international standard for television by ITU’s Radiocommunication Sector (ITU-R). This actually sounds like another dedicated article for all us display geeks out there.

In 2012, we saw the harbinger of things to come

Related: How to Write an RFP for Your Perfect Video Wall Solution

Most of us mired down in the minutiae of display technologies (you know who you are!) opined that these proof of concept products were marvelous… but relegated them to what we might call “unobtanium”.

Coincident with these revelations in 8K, the purveyors of 4K took the world by storm. Okay, it may not have been a storm of the level of HD versus standard definition, but you get the idea.

Where the 8K Resolution Aspect Ratio is Going

With no disrespect to 4K — which I personally believe will be around for a while (famous last words, I know!) — a few significant developments are indications of where we are heading.

In 2016, VESA unveiled the DisplayPort 1.4 standard, allowing use of 8K. In 2017, the HDMI forum announced HDMI 2.1 with support for 8K. In May of 2018, the European satellite operator SES broadcast an 8K television signal via its satellite system for the first time.

This demonstrated 8K content, with a resolution of 7680×4320 (aka. 4320p) pixels, at a frame rate of 60 frames per second and 10-bit color depth. It was encoded in HEVC and transmitted at a rate of 80 Mbit/s via the Astra 3B satellite during SES’s Industry Days conference in Luxembourg.

Obviously, this begs the question “is 8K the future of display technology?” The correct answers are yes (and no), but let’s start with the benefits.

The most obvious benefit is increased levels of detail. 8K resolution offers 4 times the pixels of 4K, and thus 4 times the possible detail – 16 times more than 1080P FHD. For reference in megapixel language:

8K offers a dramatically higher pixel density – meaning how many pixels are packed into every inch of display size. This is critical for understanding where an audience can sit and be able to experience an image with no visible pixel structure.

What do we need to make 8K a reality?

To the first order we need displays capable of 8K resolution, with HDR, WCG, and capability of 60FPS. We will also need a signal path capable of carrying increased bandwidth and content in the correct resolution along with source capture from which to create content.

It facilitates dynamic HDR metadata – per scene or per frame basis and high frame rates for 4K, 8K, 10K. Of course, this will require the new “Ultra High Speed” category of cables. The bottom line is that signal paths are being accounted for.

We have very limited 8K resolution content currently available. While there have been several forays in content, the first broadcast in 8K is slated to be the 2020 Tokyo Olympics, not surprisingly championed by NHK.

Guardians of the Galaxy Vol. 2 was the first commercial film to be entirely captured in 8K. Some will point to the lack of content as a deal breaker, but if it is, then experience teaches us it is not for long.

We already have existing camera technology to capture 8K resolution

We can use RED, a top manufacturer of professional digital cinema cameras, as an example. They released an 8K sensor upgrade compatible with all their existing camera bodies. Not having to buy all new gear will facilitate the migration to 8K.

Being able to film in such high resolutions allows for more control and freedom during production and post-production than ever before. The team at RED point out that “this serves as a future-proofed camera system and as display technology and distribution channels catch up, there will be high-resolution content ready to be enjoyed.”

It must be noted that, so far, demand has been limited for actual 8K delivery, noting the primary use today is for editing (digital zoom, cropping, reframing) and for film preservation (8K finally rivals analog film!).

Related: Everything You Need to Know to Purchase the Right Digital Signage for YOU

Limited streaming content is emerging in 8K (YouTube now offers a few pieces). Since there is no current 8K physical media, this seems like the logical next step. However, this requires much higher bandwidth.

YouTube tested and requires 50 Mbps to stream 8K content. Upscaling will become a big deal and both Samsung and LG have announced using AI / Machine Learning based upscaling to provide high quality content on their 8K resolution display devices that are beginning to roll out as we speak.

I am certain that the debate on the relevance of 8K will rage on, and I can see all sides. Like most debates, there is truth to be had all around. It sounds reminiscent of the 4K debates of a few years ago. Do we need 8K?

Today, we do not need it other than specialty applications and expanding the capabilities of production/post production work, but that will not stop the evolution of display technologies and pushing the envelope.

I will sign off with two comments, one serious and one not so much, but both true.

For those old enough to remember Neil Armstrong landing on the moon, just ask yourself if we needed to land on the moon. It gave us pride as a nation, but the lasting effect of the ancillary developments tied to the effort of getting us to the moon have really changed our lives.

I do not pretend that 8K resolution coming onto the market is at that level, but whenever technology envelopes are pushed, both intended and some unintended developments occur to benefit us.

My not so serious parting words is that, with 8K displays coming into prominence, those fabulous 4K displays that many of us desire will now be more affordable. Look for those holiday promotions! Sounds like win/win to me.