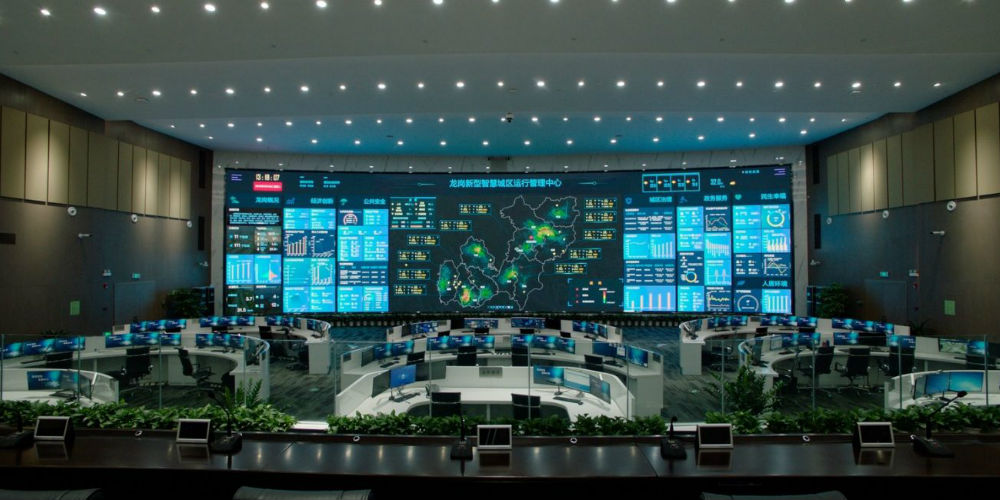 With a population of more than 12 million people, Shenzhen, China has become a major metropolis and a key economic hub in Asia within the past 40 years. Shenzhen has the highest vehicle density in the country across its 792 square miles and has been dubbed by Forbes as the world’s second fastest-growing megacity. So it makes sense that Shenzhen authorities are always working to improve traffic and emergency response as well as public safety, centering in Longgang Operation Centre.

By joining forces with networking company Huawei as the chief designer of a project, Shenzhen has become China’s first “Smart City.”

The city has used technology to build a unified, open and intelligent control system, with the Longgang Operation Centre (LOC) at the heart of the transformation. The Longgang Operation Centre receives real-time information data for public traffic, emergency management and public security before displaying it on the LOC “Smart City Brain,” a gigantic curved LED screen which enables operators to make fast and informed decisions.

Absen LED was responsible for the installation of this “Smart City” display system, the world’s largest curved NPP LED screen. With a record-breaking 103 million pixels over 1796.5 square feet, this 1.27mm pixel pitch LED video wall boasts “the highest pixel density ever achieved in an installation,” according to an Absen press release announcing the project.

The screen was installed at the end of 2017 and features Absen’s latest CR 1.2 LED series, which is designed for control rooms. Each Absen CR 1.2 panel is equipped with two power banks and two receiving cards so the power and signal can be switched to the backup set whenever needed, ensuring continuous operation.

As one of the most important sub-projects in Shenzhen’s Smart City project, the Longgang Operation Centre “required a display that would be big enough to deliver critical content with the highest image quality, while providing comfortable viewing experience and stability,” according to the Absen press release.

“To engineer the world’s largest high-resolution screen in 85 days from production to installation is no mean feat,” said Absen sales director Zhang Yongfeng. “We had to overcome the difficulties of installing the screen while the center was still being built and therefore full of dust.

Measuring at 84 feet wide x 21.3 feet tall, the 1796.5-square-foot Longgang Operation Centre screen is made up of 798 panels and designed with a curve of 121.7 feet in radius—another challenge that the Absen team had to solve in order to remove any bezel between the panels.

This was made possible thanks to Absen’s Precise Align technology, which features 16 screw-holes on the panels for fine-tuning and two directions on the Z-axis for precise seam adjustments. In addition to the physical fine-tuning of seams, an added software option offers one-click seam brightness adjustment to create a bezel-free screen.

Henan Goldroc Information Technology Co. Ltd. was among the companies involved in the LOC project, providing a software solution capable of collecting and centralizing the data before displaying it on the Absen screen.

In addition to a curved design, content quality was of paramount importance for the Longgang Operation Centre project. The Absen CR series offers colors at 110 percent (NTSC broadcast-level), as well as 255 brightness adjustment levels, which can be set manually or automatically.

Absen’s CR1.2 has an average power consumption of 153 W/sqm, 25 to 35 percent lower than that of normal 55-inch LCD products. The use of “lead-free” technology in the Printed Circuit Board Assembly (PCBA) soldering process is eco-friendly and ensures higher resistance to oxidation and higher product stability.

“We originally faced a dilemma when looking for the best technology for this project. LCD and DLP would show gaps of at least one-pixel pitch and up to 3.5mm which is not acceptable in such a demanding control room environment,” said Henan Goldroc project manager Wu Yanbin.

“When we tested Absen’s CR1.2 LED display, we were thrilled to see each panel fit seamlessly to the next, leaving no black bezel. The power and signal backup were another advantage for display stability. Technically, the screen will never go black, and that’s what we wanted,” he said.