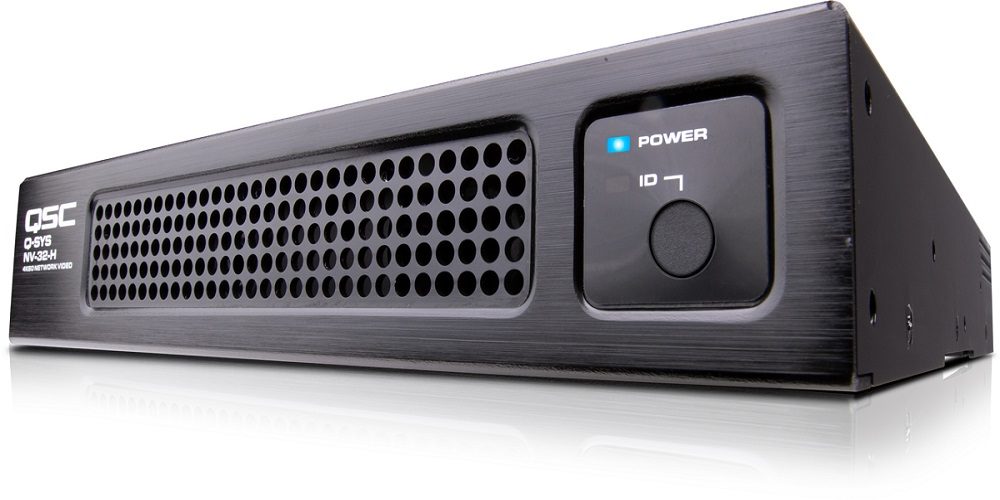 AV hardware manufacturer QSC has announced the release of the multipurpose NV-32-H core capable network video endpoint for its Q-SYS Ecosystem that allows users to transform the device into a fully capable Q-SYS processor with local HDMI switching capabilities.

The device has been reimagined and developed as a multi-purpose, all-encompassing endpoint that gives meeting room installers flexibility and reduces hardware for rooms where real estate is a premium. The new Core Mode on the device includes a fully featured audio processing engine for the Q-SYS Ecosystem, including 32×32 network audio channels, eight AEC channels, a VoIP softphone instance and optional support for software-based Dante.

Like other products in the Q-SYS portfolio, the device also features a software-based control engine that allows for simple control integration for native Q-SYS devices and third-party connected devices, according to QSC.

The new version of the NV-32-H is specially designed to support in-room video collaboration spaces and offers an integrated 3×2 video switch for locally connected HDMI sources. That removes the need for a standalone switching device and expensive integrations, saving both time and money for small-to-medium sized meeting rooms and classrooms that require toggling between in-room inputs like PCs, laptops, document cameras and BYOD devices as well as outputs like displays and projectors.

The Peripheral Mode function toggles the device into a multi-stream network video endpoint for HDMI video encoding and decoding for video distribution, allowing for video needs in larger collaboration space and balancing quality, latency and efficiency.

The new device comes just weeks after the company announced its Core 8 Flex and the Core Nano that offer onboard analog audio I/O and GPIO plus network I/O and network-only audio I/O processing and control, respectively.

In a webinar introducing the device, Patrick Heyn, senior director of marketing and training, said the only difference between the NV-32-H and the previous two releases is the “number of channel counts and the physical parts that are in the back.”

“But essentially, the core processing capability is the same,” Heyn says.

In either mode, the device acts as a plug-and-play access point of USB delivery of Q-SYS audio and conference room cameras and offers simplified integration for applications like Microsoft Teams, Zoom and Google Meet.

“We have asserted from the start that Q-SYS is merely software. The dual personality of the new NV-32-H is proof positive of this belief,” Product Manager Mike Brandes said in a statement.

“Our trust in industry-standard Intel processing combined with our ability to innovate at the software level has allowed us to infuse a new level of flexibility and scalability of Q-SYS, particularly to meet the rapidly changing needs of the collaboration space.”