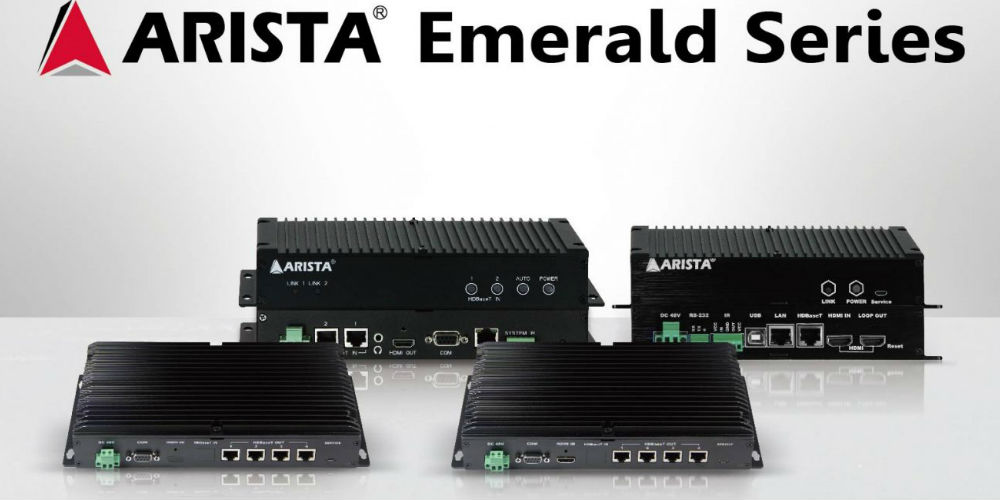 Consisting of four products, with each based on the HDBaseT 2.0 architecture and controllable via either Telnet or an RS-232 interface, each product has a built-in web server and can be controlled via a common web browser.

The four products in the Arista Emerald Series product line are:

All models in the Arista Emerald Series have a built-in CEC command emulator. A “TV on” CEC command will be sent to the TV display via the HDMI cable when one of the video source channels receives a video signal.

When auto-standby is enabled, a “TV off” CEC command will be sent to the TV set to turn the TV off in 30 seconds when no video signal is present. The TV can be turned on and off, and audio can be muted via RS-232 commands, Telnet, or web-based control. The TV will display a blue blank screen when the video mute is activated.

Some of models in the Arista Emerald Series have a blank video function available. A blue blank screen will be displayed when a Blank Video command is activated. The blank video function is useful when the presenter wants to direct the audiences’ focal point to something else other than display screen.

Additionally, the firmware can be updated via the RS-232 interface locally or via RS-232 on the transmitter/receiver unit.

The Web control also provides IR routing: the IR signal can be routed from either one of the transmitter/receiver’s IR port for an alternative TV control tool.

The USB connection on each model can be routed to either one of the Transmitter’s USB ports if remote USB accessibility is required.

Each model in the Arista Emerald Series has PoE capability to power a remote transmitter or receiver. Further, the Splitter model in the family can turn off each PoE output individually to power off the remote receiver.

“With support for HDBaseT 2.0, Telnet, and RS-232 these products offer today’s AV integrator a wealth of choices when configuring a new presentation system. I’m confident system designers and end users alike will find much to like with this new product group.”

The Arista Emerald Series product line varies in pricing depending upon the desired unit and its configuration.

Arista Emerald Series HDBaseT 2.0 product family will be on display in booth #1161 during InfoComm 2019 in Orlando in June.