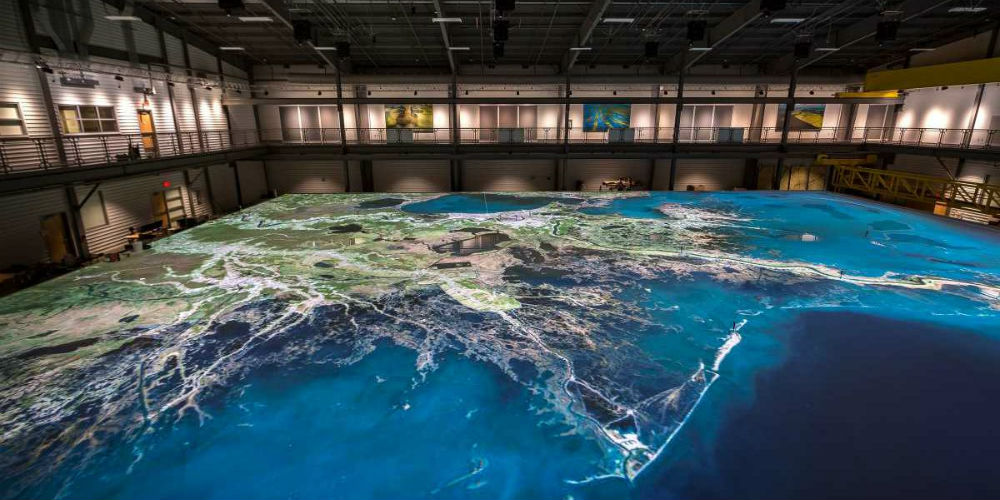 As Christie explains in a press release, the Mississippi River wetlands is a dynamic and cohesive blend of land and water, creating an ever-changing coastline from which much of America’s seafood harvest comes– and its disappearing at a rate of about a football field every 100 minutes because of rising seas, subsidence, and erosion.

The a big part of the goal behind the projection mapping project by  Louisiana State University (LSU) Center for River Studies, Interstate Electronics Systems (IES)  and Christie, is to educate people about a looming ecological and economic disaster.

“We’re going to open up strategic locations along the levees to divert water and sediment from the Mississippi River back into the surrounding basins to rebuild and sustain the wetlands that have been lost. We’ve done a lot of computer modeling of these projects but we wanted to look at it from a physical model perspective to complement and validate what the computer models have shown,” says Rudy Simoneaux, P.E., manager, engineering division, Coastal Protection and Restoration Authority (CPRA).

“The primary focus of the model is technical but the underlying extra is communicating the crisis,” says Simoneaux. “So much is dependent on the Mississippi River and its wetlands. It’s not just the grass and critters that we’re going to lose with our wetlands; it is the oil and gas infrastructure, shipping, tourism, cultural heritage, and industry along the Mississippi River.  We’re always looking for innovative ways to communicate what’s at stake. This model and facility will certainly help.”

How Christie Got Involved in the LSU Project

“We built a smaller test model a few years ago and as we were building it, we realized it could be difficult for people to get a perspective of what they are looking at. We had panels that we were going to have LSU students paint to match the real thing and then we thought, ‘what if we could project a digital image right down on it to give people perspective of what they are looking at,” says Simoneaux.

“The primary focus of the model is technical but the underlying extra is communicating the crisis,” says Simoneaux.

“When we looked at projection, I went on YouTube and saw the Cleveland Cavaliers installation of Pandoras Box that Christie did and something clicked. As you know, Quince Imaging did the project. We reached out to them to chat and they did reference Christie projectors and your technology, which brought me to your website where I looked at some of your projects and then typed in an information request. Christie got back to me and the project went from there.”

Christie’s Brian Blumhardt then contacted Mike Rideau and his team at IES as project integrator who also brought in additional Christie expertise in Paul Dumpel. With the large number of projectors and the intricacies of the design model, Dumpel recommended Christie Mystique for its ability to quickly align the projectors and keep them aligned.

There was immediate excitement across the board not only because of the uniqueness of the project, but the opportunity to educate students, scientists, climatologists and the public about the encroaching calamity if things don’t change – and fast.

“We understand the physical model’s limits.  It really only speaks to one thing, the Mississippi River’s ability to transport and divert sediment. But there are so many other things we analyze – storm surge, salinity changes, sea level rise; all the things that this model doesn’t necessarily analyze. We want to use the digital (projection) component of the project to complement the physical modeling component,” says Simoneaux. 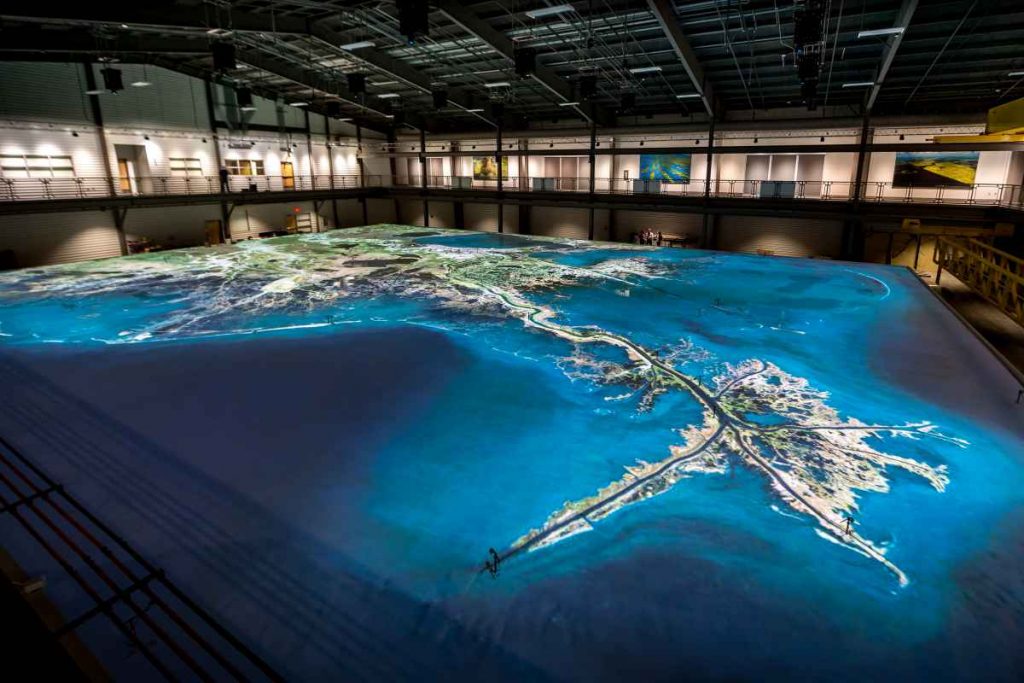 More on the Project at LSU Center for River Studies (from Christie’s press release):

There are challenges with any installation and for Simoneaux and his team, one particularly stands out – which also shows the value of Christie Mystique.

“The facility is a pre-engineered metal building and is susceptible to movement and vibrations from wind and a nearby railroad,” said Mike Rideau, managing partner of operations, Interstate Electronics Systems. “When we initially tested the projectors with the grid, we noticed a slight movement in the images. The IES team came up with a system of Guy wires tied to the projectors and some custom mounting brackets they designed; it took care of the problem and the alignment was easy with Mystique. It was the easiest part of the installation. It was perfect. I cannot say one bad thing about it.”

According to Rideau, this experience stands out among all the projects he has worked on in 30 years.

“This is the coolest thing I have ever been involved with and it’s also one of the most rewarding,” he said. “This project caused me to do research on the coastal crisis, which is very eye-opening as I have a vested interest in the whole thing since I live in New Orleans.”

Since the ribbon cutting ceremony earlier this year, CPRA has facilitated over 500 students from around the state.  The display has also opened the eyes of some influential people and agencies including the Secretary of the Interior and officials from the Environmental Protection Agency, as they realize the impact of how much land is being lost and the resultant economic and environmental impact.

“The reaction has been phenomenal! People have given us ideas of other ways we can use the projectors and that’s a good thing, we want that feedback. The whole idea of it is for people to come in and use the facility and better understand our State’s coastal crisis,” concluded Simoneaux.