Technology has made it possible for us to communicate more things to more people faster than ever before. But it’s easy to lose sight of that. We spend all day on computers of various sizes, even when we’re walking or waiting for a bus, creating and working with electronic files using electronic software and protocols. This is even more true of the younger generations, Millennials and their children, Generation Z. Think of the now-cliché image of a group of people in their 20s or younger – sitting around, not talking, faces lit by their phones as they do who knows what online. It might seem like the time of the machines is here, and the machines have won.

But that’s not a bad thing. We may use electronic devices more and more, but we are using them to communicate with other people. Those Millennials may be looking at their phones, but they are actually interacting with others, sometimes people geographically far away, or maybe even people they’ve never met in person. We use our computers to correlate data and send it in an email, but that email goes to people, so they can do their jobs better and prepare for a meeting in which people will be talking to people. Connecting people is what it’s all about.

The word “communication” comes from the Latin communicare, which means both to impart and to participate. Think of all the words that come from the same root: common, communal, communion, community and even commerce.

Consider digital signage – your target audience is people. This might be employees, students, customers, the general public, visiting VIPs, or whoever, but people are at the heart of everything we do as communications professionals.

It’s important to keep this in mind when planning and using your digital signage. We might want to think about the principles of Human-centered Design (HCD), which Wikipedia says is:

…a design and management framework that develops solutions to problems by involving the human perspective in all steps of the problem-solving process. Human involvement typically takes place in observing the problem within context, brainstorming, conceptualizing, developing, and implementing the solution…

This means that at every stage of a project, the focus is on users and other people involved – what they need, what they want, what they will find useful or interesting. In the digital signage context, it means getting into the mindset of the people you are trying to communicate with, and trying to get them to engage and maybe even interact with what you’re telling them. It means asking the right questions at every stage of your digital signage deployment, including:

You want your digital signage to be the best it can be – it cost some money to get it up and running, and the better you use it, the more valuable it becomes. And you can’t do this just sitting at your desk, thinking about it.

Get up and roam the premises. See which digital signs and messages draw your interest, and which ones don’t. Stand in one place for a while and observe how many people look at the screens, and if they just walk past or stop and linger. Think about why they do what they do. If you have on-site venues, such as a café or commissary, and are using digital signs to drive traffic, ask both patrons and staff if they’ve seen recent messages, and if those messages increased traffic, or inspired them go there.

Think about everything – even the placement of your displays. Is that one too high? Wow, that one sure gets a lot of glare in the afternoons. The best way to understand your audience is to become a member yourself.

You need a system in place that allows people to let you know what works and what doesn’t. This should be commonplace, woven into the fabric of your organizational culture. Create a system, or series of interlocking systems, that allows people to give you feedback any time they want to. This gets them interacting with your organization at a higher level than just recipients of information – it makes them active partners in an ongoing process of people communicating with people.

For digital signs, this could involve periodic surveys, letting viewers vote on favorite designs or asking people to submit a simple suggestion form detailing what they’d like to see on screens.

Communication is a Group Activity

Imagine a cocktail party where everyone took turns speaking one at a time. How much fun would that be? Not much. At a party, you want buzz, a word that is also used to describe both excitement and word-of-mouth about something. In a world of social media, of tweets being official pronouncements and Facebook comments being used as news copy, it’s all about the buzz.

Communicating with your audience isn’t just the job of one team (or sometimes one person) pushing content out onto digital screens. People today consume information, but they also interact with it. Websites that don’t allow comments are seen as less trustworthy (what are they afraid of?), and old-style push-only communications are seen as hopelessly outdated and old fashioned at best, and as annoying and authoritarian at worst. People expect to interact, so use that to both your advantage and theirs. 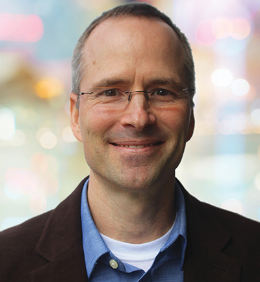 Trey Hicks is Chief Sales Officer at Visix, Inc., headquartered in Atlanta, Georgia. Trey is responsible for company sales globally, and manages the Visix sales team and reseller partner relationships. He substantially contributes to Visix marketing, product management and planning through industry and technology research, as well as customer feedback. Trey has been with the company since 1994.

Find ways others can get in on the action. Create message templates so anyone can create digital signage content, or publish design and layout guidelines so everything remains consistent. At the very least, set up an easy-to-remember email or web address where people can send message ideas.

Members of your audience can help create and curate content, but you also want them to interact with what’s being shown. Make sure each message has some sort of measurable call to action – something people can do, preferably right then and there. On static screens, this could be a limited-time offer (“Buy one muffin and get a second one free for the next hour”, and then you track how many muffins are sold in that hour). Or you could have something right there that people can interact with (show messages about signing up for a blood drive, and have a table nearby with forms and information, maybe even people they can talk to).

You can also drive traffic to the web by supplying a QR code or short URL, so people can immediately get more information using their mobile device. On interactive screens and kiosks, people can simply push a button that says, for example, “Sign Up Now” and go to the online registration form right there at the sign.

Gamification also encourages people to interact with what they see on the screens, as well as the people around them. Create fun contest-like calls-to-action, with tangible prizes, and watch audience participation increase dramatically.

The company IDEO is one of the pioneers of HCD, and they break the process down into four stages: Inspiration, Ideation, Prototyping and Implementation. Looking at their website can give you some inspiration that can become prototypes and implemented.

Keep people in mind at every stage of your digital signage, and you’ll see better results, have a more engaged audience, and be able to adjust your offering so it has the maximum impact possible. It may be all circuits and wires under the hood, but communication happens out in the world between people. Never lose sight of that and your digital signage will become an integral, integrated part of your organization.