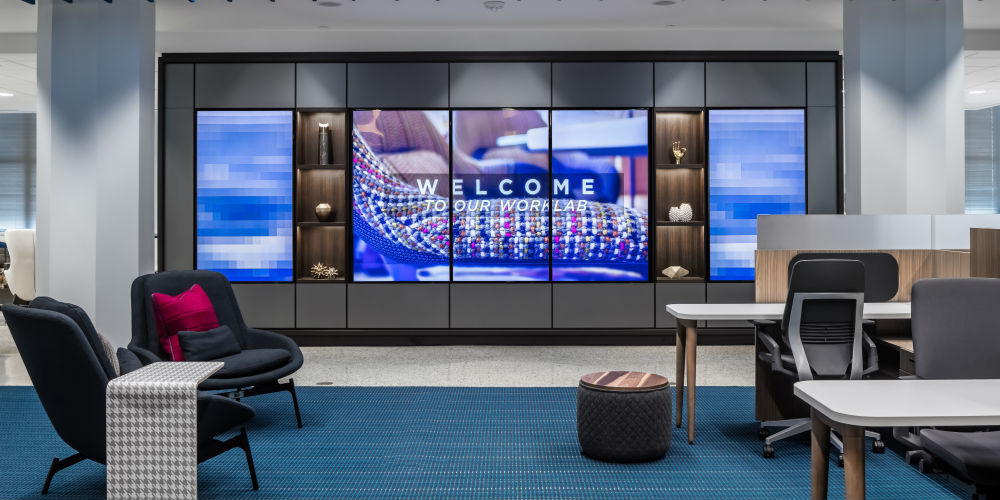 We asked six experts from around the industry about the growing trend of video walls in corporate spaces. Below is what they had to say:

Video walls even in locations like lobbies have impact. Because the cost of the panels has continued to come down, putting up a video wall, you can create the dramatic impact at a much more affordable cost. However, that applies to standard video walls, two-by-twos, three-by-threes. When you start to look at direct view LED or mosaic layouts, you then run into situations where the budget and the expectations of the end user do not align with what the true cost is.

That, again, circles back to content, because at the end of the day- this is kind of a fine line, right? That in terms of the hardware- typically, I would always say content comes first, hardware comes second. In video walls, there are instances that hardware comes first in that they say we want to do a mosaic layout. Then, they figure out how are we going to get the content to fit into it.

But, in terms of corporate environments, they’re much more accessible to put up. At the end of the day, corporations are using video walls for visual impact and then to communicate with their customers.

Most Corporations are aware of the benefits that digital media can bring its audience. Video Walls can deliver a powerful message with impressive graphics and the size of it can make a lasting impression on the audience. It’s all about wow factor and communication strategy. Our Corporate clients use video walls to tell stories to their clients, relaying information and memorable imagery, sending them with a positive impression of their brand. With this in mind I believe this is why we have seen an escalating demand for video walls in the corporate market.

Demand is growing and it’s kind of growing in a couple of different places. So one of the obvious is video walls being used as projector replacements where they’re looking for an alternative – we’ve moved in how we design a lot of boardrooms and conference rooms from an architectural standpoint, not necessarily from a technology standpoint and that can make deploying traditional projection difficult. Or if you want to do a very unusual shape, sometimes projection isn’t necessarily suited. So video walls are kind of a natural fit. You can leave the lights on, you get a higher aggregate resolution, etc. at least when you’re talking about LCD-based video walls.

LED is still very much in its infancy there because resolution and cost are still challenges, but you do also see that being deployed both as kind of digital signage. You’ll see that in a cafeteria, we’ll put up a two-by-two video wall or we’ll put up a two-by-three video wall and we’ll use that for internal communications messaging, or we’ll put that in the lobby, either as a statement piece or as a sign to welcome visitors. Part of that is that bigger has become better and we as a populous are getting jaded to screens where you start to tune things out much more readily than we used to, so you have to go larger and larger to capture that attention and to differentiate that message from basically someone just sticking their head in their smartphone and ignoring your signage.

So the video wall is a natural evolution of that because we can only make a single flat panel so large. That kind of drives a new adoption – I need something that’s big and flashy, I need something that’s going to catch attention. Particularly digital signage at retail. It’s huge there, because it’s all about the experience, right? Well, corporate isn’t all that different, where you’ve got a visitor coming in and they’re potentially doing business with your company and their experience in visiting your facility is part of that kind of business theater.

There are several different things that drive the use of video walls, and corporate has been a big growth factor. I’ve seen way more projects where it’s just kind of become commonplace. It’s super easy just to do a two-by-two video wall with the built-in processors most manufacturers offer today, but also it’s just kind of accepted that that’s the next step.

Now let’s fast forward to today. You think of an easy example, a good application that happened in the lobby the last couple of years was a salesforce lobby where you had the entire wall wrapped around the elevators, the desk and everything. We have a waterfall. It was building a mood. It was building an environment. It was environmental signage.

That term was coined about three to five years ago that, “Let’s look at environmental signage. Let’s look at it being a way to change the environment.” That’s just continued to grow. Now you fast forward to today. A lot of companies aren’t putting in these big LCD video walls. They’re going directly to LED now.

You look at that. You look at hospitality and hotels. Hotels have gone from being that four-wall building with multiple floors that started to you look at a lot of these hotels, especially in major markets like Las Vegas and New York City, downtown Chicago, Miami. They’re utilizing the video wall to build an experience. Everything’s about experiences.

You look into that hospitality/tourism space, and you’re looking at areas where they’re incorporating direct-view LED or LCD or even in some cases OLED walls to transform the space and make you feel like you’re experiencing more than what you would normally experience just walking in the doors.

Add in the next big variable that’s helping with this transformation, and that is interactivity either through AR systems or touch or sensing. That’s going to expand these video wall systems even further. Now, they do have a threat with laser projection. That is an alternative at a lower price point. We do projection that, but it seems like that. However, it has its pros and cons just as much as the video walls do.

We are definitely seeing a pick up. End of 2018 and going into 2019, we launched Alchemy 6K at a perfect time because the market, I feel like we can definitely validate that it is starting to really heat up for that corporate market. It’s CEOs that want it in their boardrooms as well as in those customer experience centers.

More companies are looking to shift the way that they engage with customers. When you think about it, we all have large TVs in our homes. Most people do. To have that in a high-end conference room just doesn’t deliver the same wow factor that maybe it did when everybody had a 27-inch TV.

It’s not just this static wall that can do one thing. I think just when you combine the software experience with the video wall, I think that’s helping to drive the corporate adoption as well.

I certainly know our clients ask for it. We were quick to offer that as a solution. We do offer video production content and strategy.

It boils down to whether or not you want to meet the need of a client. Clients will tell you, “What do I put on this video wall now that I have it? I have digital signage, but who’s going to put that content up there?”. There has to be conversations around that. I often say content is king, but the strategy is its kingdom. We have to talk about what’s going to go on that display. What’s going to go on that video wall, really, before you sell it? Otherwise, you’re not going to have success.

There would be questions to consider, for sure. Is the A/V integrator willing to provide those resources around strategy and discovery, so they can find out what the business objective is, and then guide the client similarly? You know, we used to talk about training being an A/V integrator’s job. At the end of the integration, you need to provide training on how to do stuff. We’re kind of seeing that it’s almost more important to help expose the novel ways to inject these type of technologies, videoconferencing, digital signage, into workflows and habits that can make people more effective and more efficient.

We’re finding we need those conversations up front. It isn’t just about learning how to push the button and make the system come on. It’s how you take these visual products, these new technologies, and embed them into workflows in ways to make people more prosperous, happier, less stressed. Mostly, successful

I think there’s an obligation for A/V integrators to offer the content, or offer a strategy to achieve the content. It doesn’t mean you need a wealth of imagery that you sell them on a disc or something. It means you talk about the ways they’re going to acquire it. We have a conversation with our clients, and we say, “You don’t have to create new content all the time for your video walls and digital signage. Often what you have to do is curate it.”.