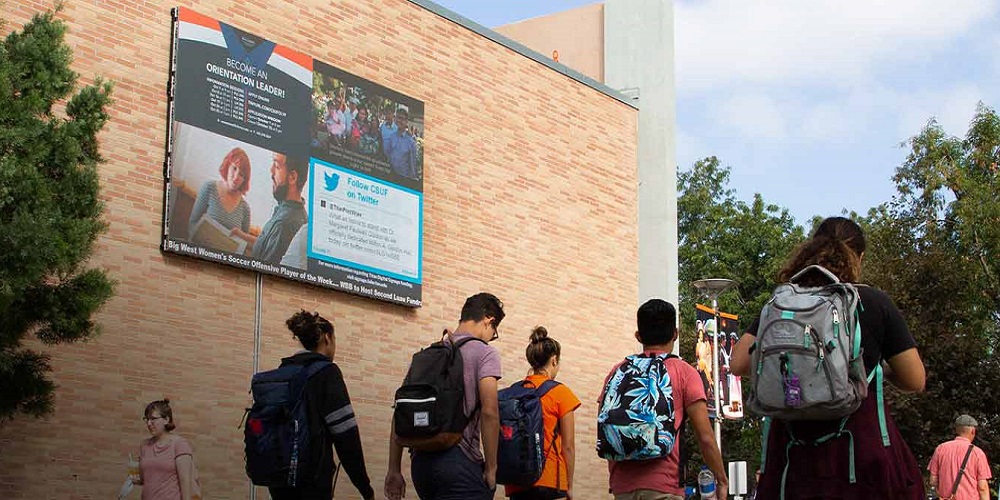 Digital signage technology could —and should —replace most static advertising and messaging for most organizations as the world becomes increasingly digital and connected.

Most of the developed world is obsessed with technology and devices. To kill time while waiting in line, you’ll probably whip out your phone to scroll Twitter or watch a video. Maybe you’re using it to find directions or for help during an emergency.

That smartphone is another form of dynamic digital messaging and something that all companies and organizations should take advantage of, Irvin said.

“I do believe that digital signage and dynamic messaging is really keeping up with the Joneses,” he said.

The technology can help create a more digital experience and replace the time and money spent on outdated and static advertising, marketing and messaging. With digital signage technology, companies and organizations are more nimble and can reallocate their resources to other mission-critical functions.

Much like video walls, a digital sign can help create a more digital experience and helps capture our attention when we’re not buried in our personal devices.

That is applicable in a variety of settings, including retail, corporate offices and college campuses.

For example, static advertisements and messaging in a busy shopping mall during Christmas time would fail to grab the attention of most tech-savvy shoppers who were just staring at their smartphone or watching TV a few minutes ago.

Customers shop with their eyes

“If it’s all static, you just lost me,” Irvin said. “We live in a digital dynamic world — public messaging has to have that component.”

At University of Southern California, Spinitar installed several digital displays, including a large one connected to a touchscreen pad in the lobby area of the school’s main athletic facility that plays videos of a particular sports program at the school.

This has been a particularly useful tool for the school’s athlete recruitment, Irvin said.

“At the end of the video, the parent is grabbing their kid by the ear, saying, ‘You’re going to sign your letter of intent now.’ It’s powerful content,” he said.

The technology also has a clear use in corporate offices, specifically in lobbies and waiting areas where potential clients, customers or employees can be recruited before they even sit down to talk with someone.

According to Irvin, digital displays in those areas can not only reduce perceived wait times, but can also entertain and help brand the business. Content can be tailored to that specific client, business group or potential employee, and for that specific meeting for which they are waiting.

This use case gives companies the opportunity to bring their message outside of the meeting room and into the pubic space of the enterprise, having an effect on a potential business partner before they even step into the room.

“That’s just another opportunity where you have a captive audience and where you can be a disciple of the brand,” Irvin said.

In an environment where digital screens capture our attention, digital signage is a valuable tool in disseminating a message to the public at the click of a button.

Kris Mosser, a former project manager and AV coordinator at California State University and now a project manager at Spinitar, oversaw a $2.5 million project that included digital signage technology in the lobby of every building, multiple video walls on campus and wayfinding screens that replaced all of the campus’ static maps.

Instead of reprinting maps and signs and changing bulletin boards — all of which cost valuable time and money — the signs can be updated effortlessly with installed software.

“It allowed for more effective communication with students in a timely manner,” Mosser said.

The administration found in a survey that the technology was far more effective in reaching students than email blasts, which had traditionally been the preferred method of communication.