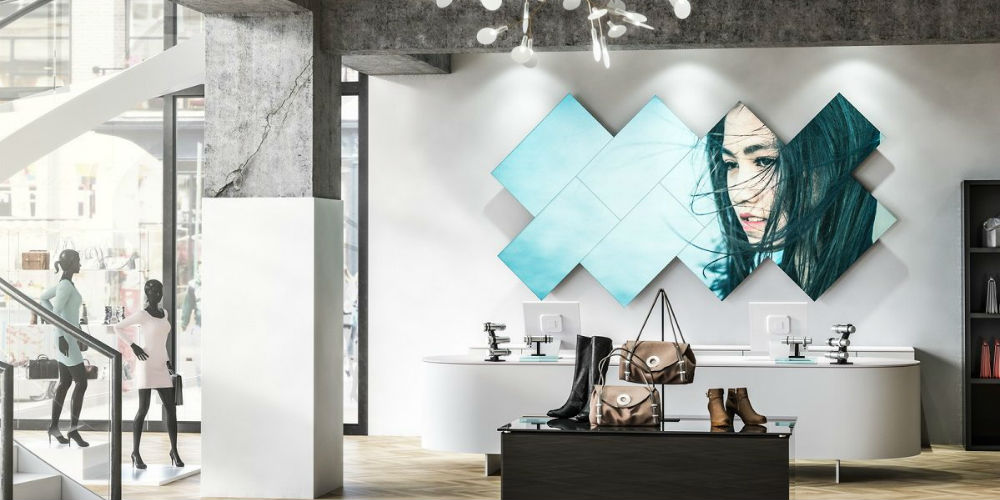 Digital signage is all about communicating a message, and the digital signage market as an AV sector has a pretty astounding message to convey about itself.

According to Grand View Research, the global digital-signage market was estimated at just over $16 billion in 2016 and is forecast to reach an estimated $31.7 billion by 2025. Other market research offers slightly varying estimates, but all of them see continued, double-digit growth ahead.

“Depending upon which research you look at, the digital signage market is growing at a CAGR of approximately 10 percent,” observes Alan Brawn, a principal in Brawn Consulting.

In terms of formats, Brawn says video walls are growing at what some estimate is nearly double the overall market CAGR through 2022. In terms of verticals, Brawn sees retail, food service, education, corporate/financial, healthcare, transportation, and entertainment as the biggest sectors, with video walls reaching deeply into the retail, corporate, education, control rooms & security, and transportation verticals.

All of them, he says, represent a huge opportunity for integrators.

Joe’ Lloyd, VP of global marketing at NanoLumens, says demand for both digital signage and video walls is increasing steadily.

“We see the entire visualization market growing vastly, thanks to decreasing LED costs and improving technology,” she says. “These are solutions that more and more companies are going to be able to take advantage of.”

Lloyd sees signage in general getting larger, to the point where it blurs the distinction between digital signage and video walls.

“Up until now, video walls have been their own digital signage market segment, but that’s changing, especially in transportation hubs like airports but also in corporate and retail scenarios, for instance,” she explains, noting that large LED displays are rapidly displacing projection in corporate boardroom and campus applications, something they’ve already largely done in Federal-level command and control applications.

Samuel Recine, director, Americas and Asia at Matrox Graphics, notes that digital signage has in some instances become a replacement market for infrastructure, including players, servers, and more.

“But there is still plenty of new growth as well,” he adds.

He looks at software as the central hub for digital signage and video walls going forward.

“While the digital signage market is broad and diffuse, encompassing digital menu boards, kiosks, point-of-sale, wayfinding and digital advertising, software is its unifying factor,” he states.

“The software that exists for managing each vertically specialized application of digital signage keeps getting better, and the robustness of solutions — even at scale —keeps improving.”

Recine says that video walls occupy a small subset of the entire digital signage market, but the segment is deep in double-digit growth right now, particularly because of the shift to IP video walls, which make the sources unlimited, the view-point destinations unlimited, and the costs of multi-node deployments are exponentially cheaper than ever before. 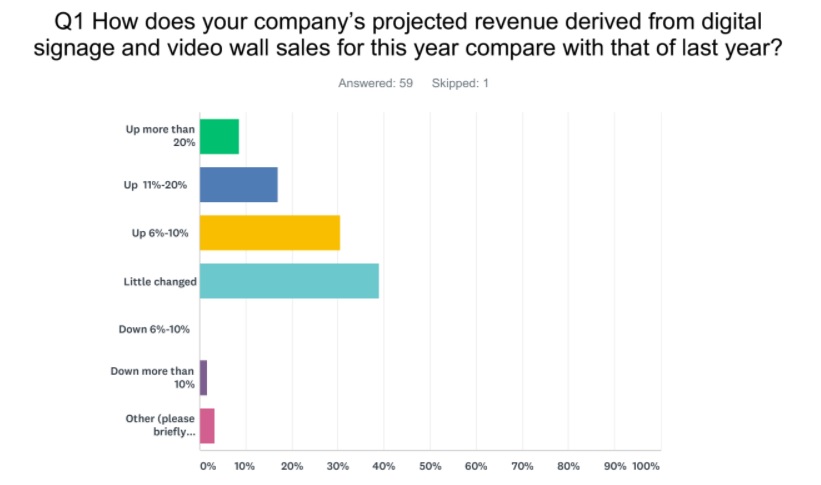 “Then came casinos, airports, and other large-budget project sites,” he says. “Today, video wall choices are so abundant, and costs are so much lower, that literally all of the digital signage market has video-wall [aspects].”

“It’s the single hottest category we have, and the cost per click is twice what we see in any other are of the display business,” he says.

“A lot will depend on the scale of the project,” he says. “A large-project customer may go with separate display-integration and content-creation vendors, but a smaller one might want one company that can do it all.”

Tiffany Dozier, EVP of channel sales at Premier Mounts, believes that advancements in display technology will drive video walls to exceed the 18 to 20 percent of the digital signage market they now own.

“The catalyst for overall video wall growth is the continued innovation efforts by display designers, decreasing display costs, expanding creative use of displays by advertisers, designers, and architects, and bigger AV budgets by corporations,” she explains.

“Over the next few years, I expect a significant increase in customizations that add more interactivity, resulting in higher customer retention because of the enhanced user experience, especially in applications where crowds can interact and feed their own user experiences to the video wall.”

Jarad Flax, strategic accounts manager at Milestone AV Technologies, echoes that, noting, “Panel manufacturers have done a great job in paving the way for the success of video walls.

Daisy chaining, System-on-Chip [SoC], and other technological features have made it more affordable than ever to design and implement video walls, while technologies such as touch/interactivity add another dimension to potential projects.

“Mounting companies have also engineered video wall solutions that make the deployments easier for the installation teams and ensure the final product is aesthetically pleasing and impactful. In the future, I believe we’ll see direct-view LED usurp some previously LCD-based video walls, while also seeing gains in resolution and brightness overall.”

What It All Means to Integrators

Digital signage has major implications for AV systems integrators. In fact, says Brawn, they should expect it to become a focus of their business at some point if it isn’t already.

“Digital signage has evolved beyond retail and now enters the realm of being a major tool for communication and collaboration,” he says.

“Also, information-based networks overall are growing. Digital signage is the convergence of AV, IT, and content creation, so it is only natural for an AV integrator to embrace [it].”

Lloyd foresees AI and smart technology impacting digital signage in coming years. In fact, as the novelty of the video wall itself wears off and they become ubiquitous, she says buyers will make decisions based on their ancillary capabilities, such as data analytics.

“We used to buy cellphones and televisions as things, but now we buy them based on what they bring with them, like Netflix with the television,” she says. “It’ll be the same for signage and video walls.”

End users, she adds,will want integrator partners who can design and install signage and video walls but are also able to provide services around these installations.

“The technologies are changing so fast that the customer can’t expect to be an expert, so they’ll rely more and more on the integrator,” she says. “That’s where the opportunities for integrators will lie.”

On the other hand, Flax reminds integrators that they can rely on manufacturers to help them expand the digital-signage and video-wall elements of their business.

“Digital signage manufacturers, no matter the component segment, are always trying to make specifying and selling digital signage and video walls easier for current and prospective integration firms,” he says, citing Milestone’s Technology Solutions Group (TSG), established by commercial mount-system manufacturer Chief, a division of Milestone, in 2016 to make it easier for integrators to navigate the digital signage landscape.

Recine calls digital signage “total opportunity” for integrators. “Any digital-signage solution provider is guaranteed to have a certain percentage of their projects that are best served by video wall processing solutions, especially IP video walls,” he says.

He also predicts that digital-signage software is going to help integrators there.

“Signage software itself is going smart — better feedback loops, analytics, proof-of-consumption, and customer engagement techniques such as interactivity that register value,” he explains.

“For video walls, the entire story is about IP video walls, which includes the ability to do all of the following: capture not only baseband, but also IP streams as sources; live stream part or the entire video wall to an unlimited number of decoder boxes; perform video processing tasks on a mix of baseband and IP sources, including rendered content.

As the novelty of the video wall itself wears off and they become ubiquitous, buyers will make decisions based on their ancillary capabilities, such as data analytics, according to Joe’ Lloyd, NanoLumens.

“Most importantly, IP video walls support treating an entire fleet of decoders or players as part of a single video-wall management system.”

Vitti says both digital signage and video walls represent a huge opportunity for integrators, assuming they make the necessary investments in programming expertise and content creation.

However, he adds, every integrator in this space needs to properly market its capabilities, as well as survey their own in-house talent pools to see how existing knowledge can be leveraged for it.

“If you have someone who is especially good at computer graphics, that can significantly help in content design and creation,” he says.

Growth means opportunity,” says Dozier. “Every new stadium, Fortune 500 corporate headquarters or entertainment venue will be moving towards new LED technology. Existing buildings or venues will inevitably upgrade their outdated digital signage and opt for new technology that is more effective in delivering messages to customers.

“In addition, our society carries a ‘go big or go home’ mentality, competing to have something bigger and better than their competitors. This will also help drive demand and create opportunity.”

To leverage that opportunity, she says integrators will to need to market their capabilities at a higher level.

“Educating yourself as an integrator and knowing the challenges that come with new technology can help you get a step ahead of competitors and carve out your niche,” she explains.

“Marketing your knowledge and capabilities will let customers know that you are an expert in this area and can be trusted on very expensive projects such as these.”

Digital signage and video walls are quickly transitioning from niche technologies into standard tools in the AV kit.

They bring with them technical and creative challenges such as content development, production,and management, but they also offer integrators’ clients a more comprehensive and effective solution to their messaging needs.