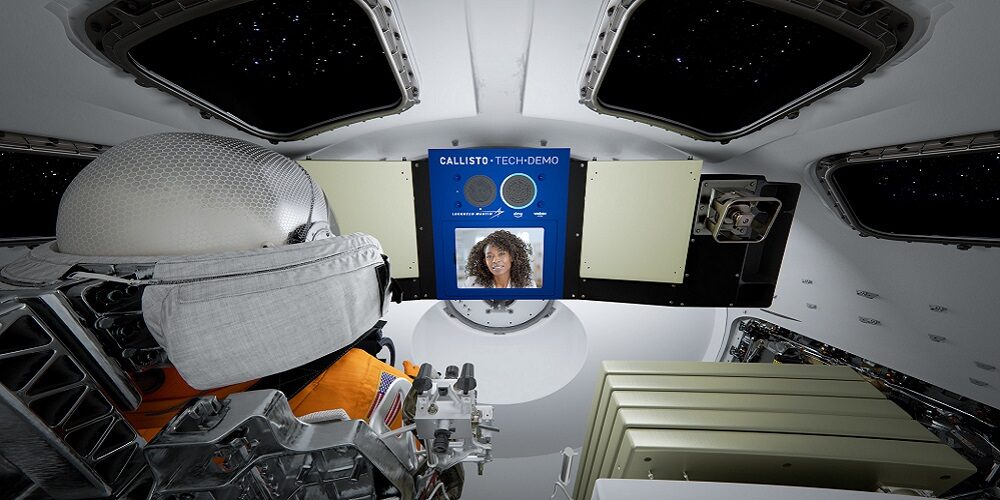 Callisto is an innovative technology demonstration that will fly onboard NASA’s Orion spacecraft during the Artemis I mission to the Moon. Courtesy/Lockheed Martin

What if future astronauts were able to communicate via videoconferencing technologies with control on Earth? That’s what Cisco, Amazon and Lockheed Martin are trying to do with NASA’s Orion spacecraft.

The companies say they are teaming up to integrate “unique human-machine interface technologies” into the spacecraft to learn how future space explorers can benefit from far-field voice technology, Ai and tablet-based video collaboration.

The Callisto technology—a payload featuring Alexa and Webex onboard the Lockheed Martin-built craft—will first be used for NASA’s uncrewed mission around the Moon and back to earth, called Artemis I, which is expected to launch early this year.

According to a press release, “Callisto uses Amazon Alexa and Webex by Cisco to test and demonstrate commercial technology for deep space voice, video and whiteboarding communications. Lockheed Martin, which designed and built the Orion spacecraft for NASA, is leading the development and integration of the payload.”

In a blog, Cisco says Callisto will employ a purpose-built version of Webex to help test collaboration technologies that could be used in future missions for deep space exploration.

The companies have worked with NASA to build a virtual crew experience at NASA’s Johnson Space Center in Houston, which allows operators to interact with Callisto from mission control. Those remote interactions will test and demonstrate how voice and video collaboration technologies can help improve the efficiency and situational awareness of astronauts on future missions.

In addition, the technologies are also designed to provide astronauts with access to flight status and telemetry and the ability to control connected devices onboard Orion.

Audio and video of the interactions will be transmitted back to Earth throughout the Artemis I mission so engineers can analyze the performance of the onboard systems while sharing findings with the public.

This version of Webex, according to Cisco, is much different than the Webex everyone knows. It was developed to interface with NASA’s Deep Space Network and bring modern collaboration capabilities and a realistic video experience to space travel.

For Callisto, a technology-demonstration payload onboard the Orion spacecraft for the Artemis I mission, our engineers started by marrying Webex software and hardware to build a custom video collaboration solution for deep space. Our state-of-the-art Webex software solution aboard Orion is linked to one of the most advanced, AI-powered collaboration desk devices on Earth—powering intelligent collaborations. The Webex Desk Pro device housed in the Mission Control Center at NASA’s Johnson Space Center in Houston enables us to test video interactions with technology onboard the spacecraft, as well as test dynamic content-sharing capabilities.

To get by bandwidth constraints in deep space and broadcast in HD quality, the Webex Callisto solution uses the AV1 codec for video compression to ensure transmissions are of the highest resolution video possible at 128kbps, about a tenth of the draw of a typical videoconferencing solution.

Two Webex Boards are also involved in the mission—one aboard Orion and another to connect outside groups with the Callisto Mission Control Center at NASA’s Johnson Space Center.

Cisco says Webex could allow future space explorers to stay connected via HD video to mission control, basecamp and their loved ones while collaborating on Webex devices.

According to the companies, the Callisto demonstration will also allow students, families, space enthusiasts and the public to engage and virtually “ride along” with the Artemis I mission by following the mission on Alexa-enabled devices.

Alexa, Amazon’s virtual AI assistant, is also integrated into the Callisto payload via custom hardware with the AI built in. This is designed to allow astronauts to access real-time telemetry data like speed and temperature. Alexa will also help astronauts control devices on board, like lighting.

In addition, the AI will also be able to retrieve real-time information from Earth, like news briefings and sports scores, according to Amazon.