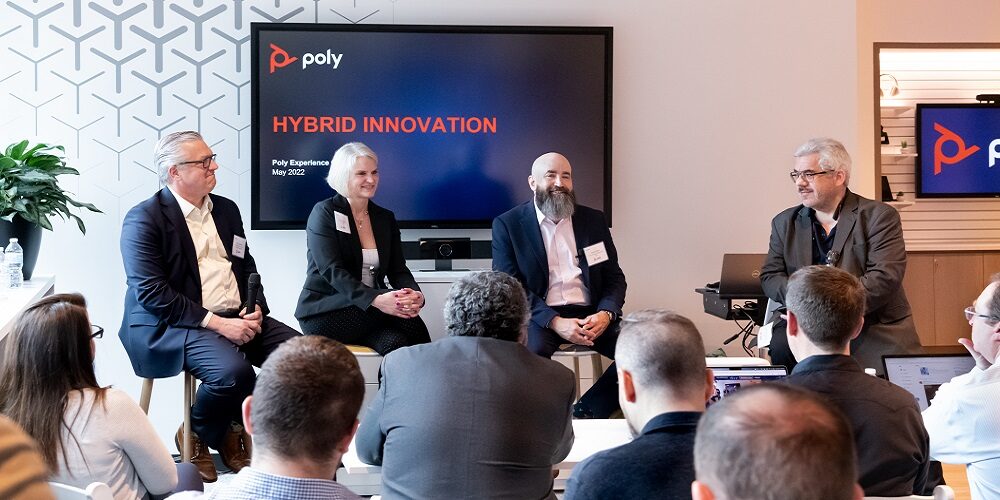 It is now very clear that after two years of working remotely, employees don’t want to go back to the office. However, some executives are forcing the issue, which suggests a massive disconnect between different levels of workers and the need for employers to provide the technology and policies to make hybrid work more equitable.

The survey also found that employers need to do a better job meeting those demands of the distributed workforce, as 72% of workers say their organization needs to create equity between remote and on-site employees.

Stop trying to force a return to the office

Poly’s survey was released Tuesday, the same day the company unveiled its New York City-based Experience Center where customers can come test the firm’s technology lineup of video bars, cameras, speakerphones and more. The event featured a panel of Poly representatives and two of their customers’ IT professionals, both of whom said their organizations will never return to the office like it was prior the pandemic.

Gary LaSasso, senior director of global IT at Philadelphia, Pa.-based Amicus Therapeutics, said the company had been holding return-to-the-office meetings, but they are now realizing the need to continue to support their hybrid workforce.

The company is currently building out a new office space in New Jersey where only the CEO has an assigned desk, and the remainder are flex offices, conference rooms, open spaces and more. This is designed to give employees the flexibility to come into the office to have a space to work, with access to state-of-the-art collaboration technology.

LaSasso says the company solicited input from the firm’s 500 employees about how they would use that space to better understand the workstyles of each employee.

“We’re using that input, and some of our own, you know, expertise to guide the decisions that we make in those in those spaces,” LaSasso says.

Jocelyn DeMaio, a collaboration expert who works in the financial services industry for a Fortune 150 company, says her company asked every employee about their intention to return to the office, and about three-quarters of employees indicated they would not return to the office even one day a week.

Now that the company’s offices are open for employees, badge-in data is confirming those figures.

The notion that remote employees are missing those casual “watercooler” conversations and team-building experiences falls flat for DeMaio’s organization, a large portion of which was already fully remote. Further, collaboration technology such as Microsoft Teams, Zoom and advanced hardware such as AI-enabled cameras and microphones (some of which Poly was showing off during the event) helps make those casual conversations possible in a remote or hybrid work environment.

Return-to-work campaigns that incentivize employees to come back to the office largely don’t work, so companies need to rethink their strategy and meet employees where they are – or risk losing them.

“We need to make sure we’re listening to them and that we’re taking that seriously,” DeMaio says. “I see companies that continue to lean into the technology they’re giving to their employee base are going to succeed over the companies that want to bring everybody back in the office 9 to 5, five days a week.”

Where are employees more productive?

Poly’s research suggests that both introverted and extroverted employees favor distributed work, with 64% of introverts saying their productivity has increased since the pandemic and 51% of extroverted workers saying the same.

DeMaio says her company is currently looking into this productivity question, but adds that interpreting data about the number of employees that use video doesn’t necessarily equal productivity. However, the fact remains that driving to work could be spent on actual work.

“I could actually take a call from my car, but I can’t see the person and I can’t see the context—I’m just listening,” DeMaio says. “it’s a different experience than being immersed in all of that.”

For LaSasso, the question of remote work, hybrid work or in-office work comes down to if the organization is meeting its goals or not.

“If we’re meeting those goals—whether we’re in the office or at home—what’s the difference?” he questions.

For many, remote work has been a productivity boost, including for some Amicus Therapeutics employees with disabilities. Remote work has allowed those employees, some of whom can’t physically make it to the office, to contribute in new ways.

One employee, Anthony DeVergillio, the company’s manager of internal communications, has worked at home for more than four years due to a type of muscular dystrophy and needing a wheelchair and ventilator. This helped level the playing field, but DeVergillo’s ventilator produced a loud noise that made DeVergillo anxious about video calls.