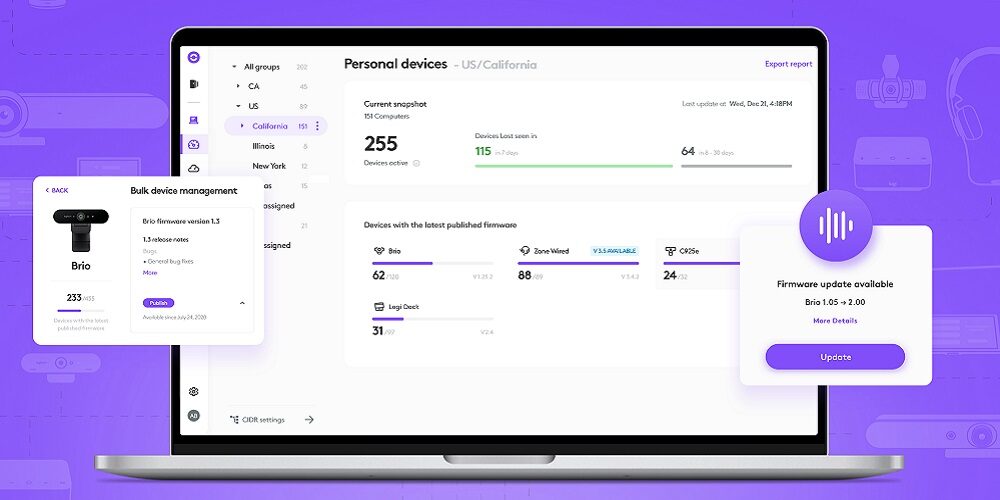 Logitech has released an update to its Sync device management platform that supports personal collaboration devices and streamlines IT management of conference rooms and workstations from a single cloud-based interface.

According to a press release, the company’s Sync device management platform will now support devices such as webcams, headsets and docking stations to make it easier for IT professionals to manage their organization’s remote work environments.

Sync provides a single web-based platform for IT managers to push firmware updates and enable new features to meeting rooms as well as personal collaboration devices to reduce potential issues before they turn into IT support tickets.

The new features make it easy for IT to mass enroll their entire fleet of workstations with Logi Tune and gain visibility into device status. Users can also personalize their webcams and headsets with Logi Dock, the company says.

Read Next: UCC Platforms Are Leading To An Increase In Helpdesk Tickets

In addition, Sync provides insights such as meeting room occupancy and other analytics to help IT managers make data-drive decisions on the office layout.

Scott Wharton, general manager and vice president of Logitech Video Collaboration, in a statement says that remote work and collaboration tools helped save the global economy, but is also creating issues in the IT department with tech professionals having limited visibility into remote workers’ tech issues.

“This is a potential productivity crisis,” Wharton says. “Logitech Sync solves this critical problem by extending these views of what’s happening in the office to the home (or anywhere else), not to mention a whole new frontier of insights and analytics to keep our organizations humming and thriving.”

Sync’s new personal collaboration device management feature is available as a public beta globally and free for existing customers. Organizations can request early access to the phased rollout through the Sync Portal.