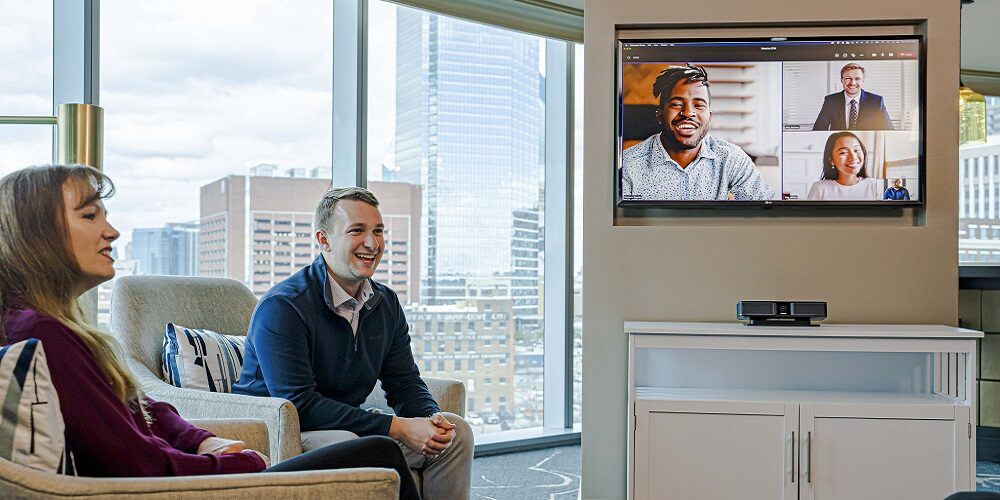 Videoconferencing has been evolving for many years, but never as rapidly as in the past few years during and since the pandemic. By necessity, today’s videoconferencing services are providing a way for employees to connect regardless of where they work. Businesses are driving this evolution and the important role it plays in the future of meetings.

According to a report by Gartner, nearly one-third (30%) of metaverse technology investments made through 2027 could be dominated by virtual workspaces. While many colleagues use Microsoft Teams, Zoom and Google Meet today, they potentially could meet up in the metaverse – or some version of it – in the not-too-distant future. This is especially important as Gen Z continue to enter the workforce. A Bain & Company report shows that young consumers (age 13-17) prefer video games over other forms of entertainment. If that preference continues, they may be the first generation to embrace a virtual reality (VR) and/or augmented reality (AR) working environment. VR is just one of many innovations that will guide and ultimately dictate the future of videoconferencing.

Let’s take a closer look at the technologies that have the potential to shape the way workers connect and engage.

Meetings made better with a virtual touch

The world of interactive entertainment is gradually headed toward experiences like those featured in the movie Free Guy – that is, high-end VR with intelligent characters and immersive environments. But will the future of work, play and education look anything like the movie Ready Player One, which portrays a world in which people spend a good portion of their days wearing VR headsets? Let’s hope not, but the technology has attracted the attention of many big tech firms, which is poachingtalent from traditional game developers.

One of the initial benefits of VR could be something as simple as body language and becoming more attuned to the subtle gestures that aren’t always visible during a typical videoconference. In a VR setting (in which avatars are based on the real-time personas and movements of real people), those aspects could be amplified while eliminating the background distractions of a busy home or coffee shop. After all, photo bombing doesn’t exist in VR – and even if it did, software could intelligently modify or edit out distracting imagery to ensure meeting participants remain focused.

This technology may be coming faster than you’d expect – Microsoft has already deployed a private preview of Mesh, its 3D avatars concept, for Teams. Developed with VR, AR and traditional videoconferencing in mind, Mesh allows meeting participants to swap their real faces with avatars. It is among the solutions that resemble a video game in terms of character animations, interactive backgrounds, and rendering. Zoom is exploring this space as well with virtual environments and Immersive View.

Distractions can be minimized with the power of AI

Automation has received a lot of attention in recent years, but few may realize that the technology could dramatically change the way we videoconference. For example, artificial intelligence-enabled assistants have the potential to intuitively and automatically schedule meetings, take notes, and share actions after participants gather. AI already makes it possible to get an instant attendance report and a transcript after each call, and while the results may not be foolproof, it prevents employees from having to manually transcribe every word.

AI may also play a significant role in reducing meeting distractions by automatically framing the person speaking to keep participants focused on the message versus the visuals of a wayward camera. Better still, AI can monitor and adjust volume levels all on its own to ensure that every word is clearly heard. Other features, such as noise cancellation and voice detection, are made better by AI.

Any effort to reduce workplace distractions, especially those that occur during meetings, could pay massive dividends in the years to come. A study by Dropbox and The Economist Intelligence Unit shows that more than one quarter (28%) of knowledge workers’ time is lost to distractions, averaging $34,448 (581 hours) in lost productivity. All told, the study estimates that distractions cost U.S. employers $391 billion every year.

Gamification may be the key to greater engagement

Even without distractions, participants may find it difficult to remain engaged, especially if the meeting runs long or if participants have other tasks on their mind. This is true for both hybrid work and hybrid learning situations. Gamification, the process of turning generic tasks into interactive experiences, could help change that.

Gamification could offer organizations and educational institutions the opportunity to improve meeting attentiveness by employing brief quizzes, virtual rewards for participation, or leaderboards that track the top participants. Recognizing the potential of gamification, Zoom offers breakout rooms that allow people to meet privately, which is great when teams are formed to solve problems or answer questions in a quiz.

Innovations made in online multiplayer games may likely fuel workplace collaboration in this regard. And with the game industry’s biggest publishers pushing further into online game development, unified communications (UC) solutions developers will have a lot of inspiration to draw on in the years to come.

Videoconferencing will continue to evolve

From VR, AR and metaverse collaboration to AI enablement and gamification, the future of work is poised to be more immersive and engaging. UC providers have already shown their support for 3D avatars and other virtual world features, and many other corporations, including Nike and JPMorgan, have shown great interest in exploring the metaverse. These features stand to change the way we all meet by diminishing distractions while amplifying engagements. At the very least, organizations may use VR and AR to collaborate in new ways that were never before possible or considered, unlocking new business opportunity and expanding the power of collaboration.

Martin Bodley is the director of emerging business at Bose Work.