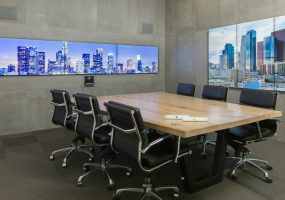 7 Steps for Having a Successful Web Conference

How to Commission, Choose, and Implement Videoconferencing Technology

When it comes to choosing videoconferencing technology, you need to understand your needs, write a substantive RFP, and understand the installation process.

The ClearOne Collaborate Pro collaboration systems will not integrate with Skype for Business with everything from audio to cameras.

Logitech moves into the small meeting room space with its premier conference camera solution for huddle rooms with Logitech MeetUp.

How to Expand Traditional Classroom Boundaries with Videoconferencing

Videoconferencing is a way to allow students in the classroom to transport to various places, speak to various people, and expand horizons. It can help teachers as well.

How Pitney Bowes Simplified Communications with Polycom RealConnect for Office 365

In a recent interview, Eric Steimel of Pitney Bowes explained how his company found a solution in Polycom RealConnect for Office 365 to connect existing systems to Skype for Business.

IT Admins are looking for ways to easily manage meeting rooms for a reason. It is estimated that 1.2 trillion dollars will be spend on digital transformation this year. Meanwhile, there are twice as many teams today as there were five years ago, four times as many devices per user, and by 2020 estimates say […]

If you’re a company that uses Google services for your practices, G Suite is going to make things much easier for you. “Productivity is a team sport,” says Scott Johnson, Director of Real Time Communications for G Suite by Google Cloud at a keynote at Enterprise Connect 2017. “What we’ve focused on is removing friction.” That […]

5 Considerations for Investing in Videoconferencing as a Service

Shifting over the past few years, videoconferencing is no longer a nice-to-have option but a necessity. This is all due to the benefits it offers to businesses. The cloud boosts its popularity further, making it affordable for companies of all sizes and budgets. However, before making the switch to cloud-based videoconferencing, there are a few […]