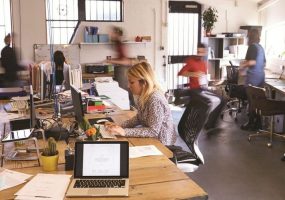 Is the Resimercial Workspace the Next Trend in Offices?

After open office spaces made such a splash, resimercial spaces – technological hybrid offices that are never truly off – are facilitating collaboration.

Integrators discuss the concept of standardized, repeatable meeting room solutions, with one saying there’s no chance while the other says it’s the future.

The San Antonio Water System (SAWS) hired DDS-AV to create a sophisticated digital upgrade for its boardroom, complete with conferencing and voting systems.

There are five generations found in today’s workplace, each with their own diverse set of requirements and preferences – especially pertaining to the technologies used to share content in a meeting environment.

With an ‘Innovation Pavilion’ within its InfoComm 2017 booth, Middle Atlantic aims to showcase innovation with new conference tables, mounts, and more.

Brian Feldmann does not believe in business as usual. As Senior Communications Administrator for Cubic Corporation, he outsources system design and engineering for conference rooms around the world –but he handles the installations himself with the company’s local IT staff. That approach worked extraordinarily well in a customer demonstration center Feldmann rebuilt with the help […]