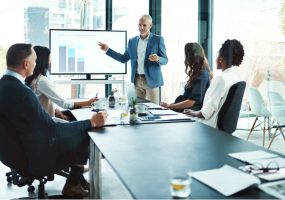 There are a number of considerations to take into account in order to get the best out of your audio visual presentations.

Organizations are in need of better bandwidth and faster connectivity constantly, so let’s figure out if fiber or cable is better for future systems.

Companies like Sennheiser are applauding the new Order of Reconsideration from the FCC, which will provide more freedom to wireless audio manufacturers and users concerning spectrum bandwidth.

Why We Need Higher Bandwidth in Commercial Buildings

Today, the need to provide higher communications speeds (bandwidth) for smart phones, tablets and portable computers, and Wi-Fi portals, has dramatically increased in all related sectors. This insatiable high bandwidth demand and the ensuing intolerance for slow download and upload speeds has also impacted the home entertainment sector. In it, having higher bandwidth for access […]

Calling 911 on Bandwidth: SmartWAN to the Rescue

The “bring your own device” (BYOD) trend related to smartphones, tablets and laptops may ease the technology burden for enterprises large and small—yet at the same time it slows down communication networks because of increased bandwidth reliance. The results? Voices echo or break up on business phone service. Streaming audio and video are slow, choppy […]

Ramsey School is Supporting 2,000 iPads with Bigger Bandwidth and This Network Provider

Ramsey School turned to its 15-year relationship with Lightpath to expand its network bandwidth and enable 1:1 capabilities with students, which includes supporting 2,000 iPads.

In an Effort to Speed Up Internet, Bronx School Bans Students From Using Wi-Fi on Personal Devices

Bronx High School of Science is working with the New York City Education Department to improve the school’s broadband capacity.

As the video market continues its adoption of 4K and audio moves into a new era of object-based surround formats, the need for better, faster bandwidth comes into focus.