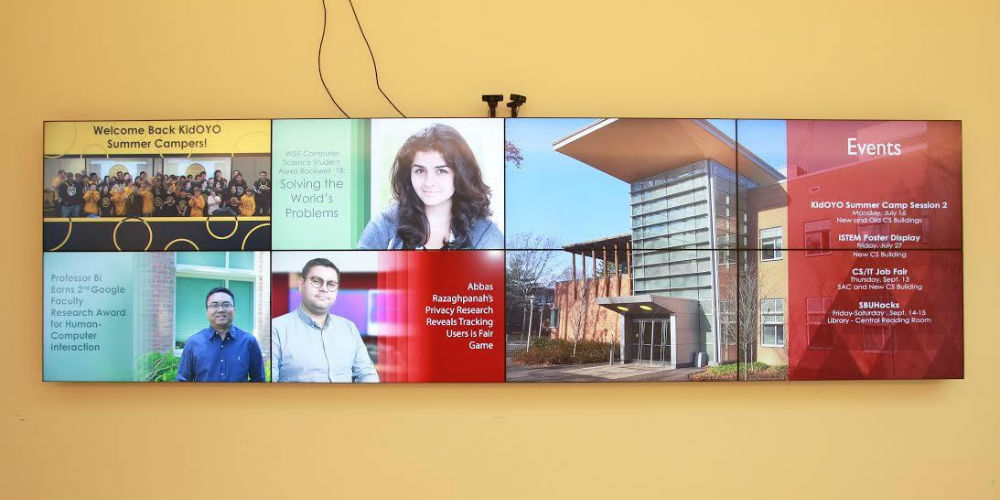 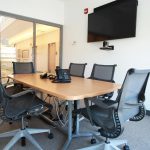 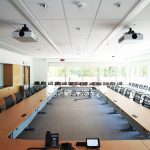 The ability to collaboratively communicate, and do it effectively, is of paramount importance in a higher education setting. Lectures and presentations ranging from simple board meetings to complex PhD defenses are conducted in on-campus conference rooms at universities of all sizes.

At Long Island, New York’s Stony Brook University, the largest conference room on campus is part of the school’s Computer Science department and it needed a serious communication system upgrade. The department also wanted to add a video wall to their main lobby.

John Schappert of Adwar Video turned to ClearOne, knowing that their full array of communication solutions would produce a highly productive conference room and provide a first rate video wall in the department’s lobby.

Peter Ruland, Associate Director of Operations for Stony Brook’s Department of Computer Science, describes their main conference room as “gigantic” and added, “Academics are not big fans of lapel microphones, as they tend to stand up and move around to talk. One of the challenges in this conference room was that we were having a hard time capturing people’s voices and leveraging the echo cancellation during the video conferencing of our lectures because of the old setup we had.” 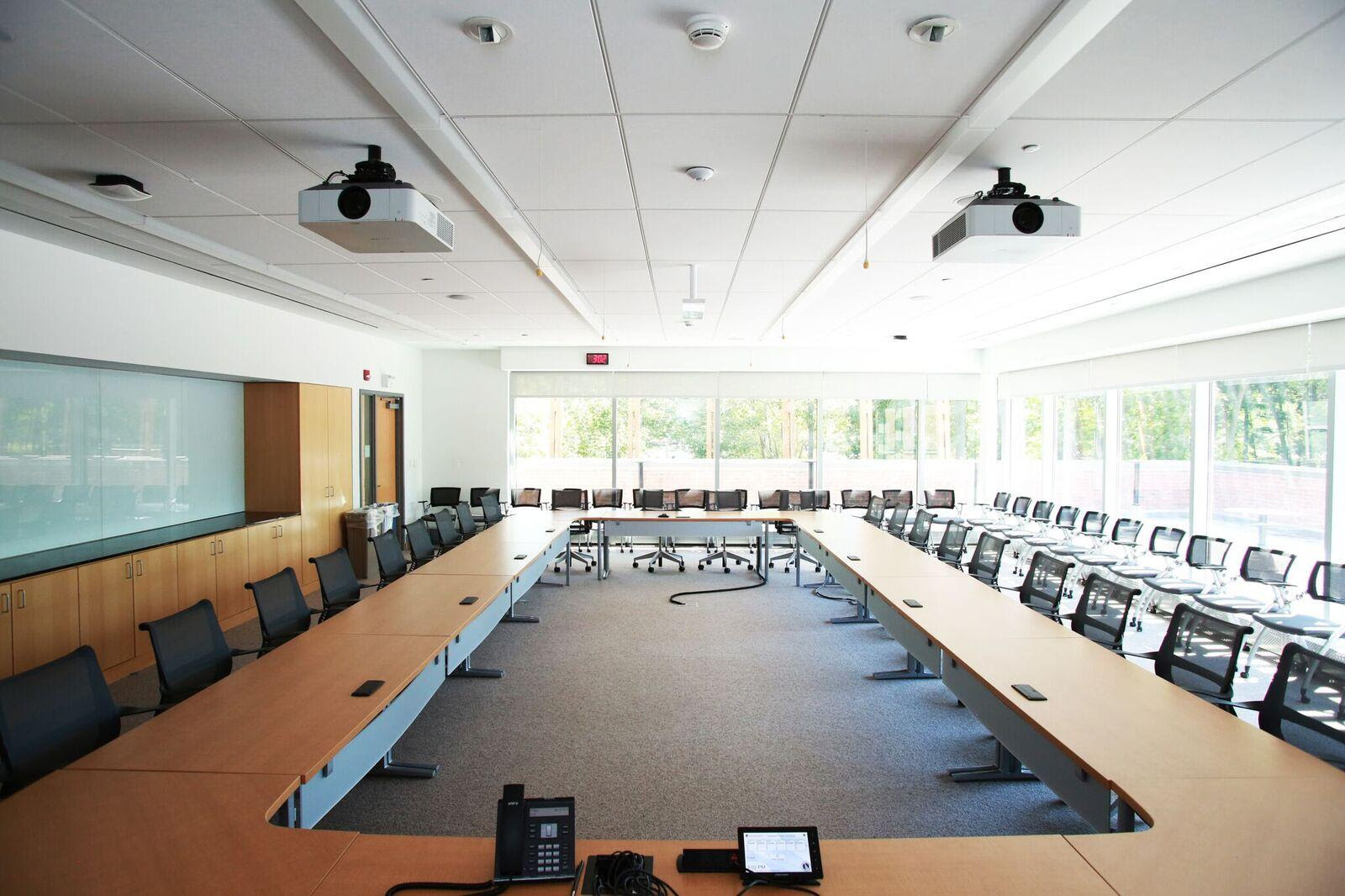 Schappert knew ClearOne’s Beamforming Microphone Array 2 product would be the perfect solution for a conference room of this size and bring the room’s communication capabilities up to speed. The Beamforming Microphone Array 2 features ClearOne’s next-generation Acoustic Echo Cancellation and Noise Cancellation technology that perfectly addressed the echo issues the large room was experiencing under the outdated system.

To upgrade the video conferencing capability in some of the Science Department’s smaller to mid-size conference rooms, Schappert made the choice to install ClearOne’s Unite 200 PTZ cameras. The UNITE 200 PTZ Camera is an extremely versatile, professional-grade, HD video camera complete with USB, HDMI, and IP connections that can be used for a wide range of possible applications.

Schappert was also tasked with installing a video wall in the department’s main lobby. “For the video wall we used the ClearOne VIEW Pro Encoder E120 and VIEW Pro Decoder D210,” Schappert said. “They provide such a simple, install-ready set up that delivers excellent video quality as well. Stony Brook wanted this done quickly and we were able to easily meet that demand.” ClearOne’s VIEW Pro is an extremely adaptable, and highly capable video processing and management solution for needs ranging from a single video wall to a large video distribution network. 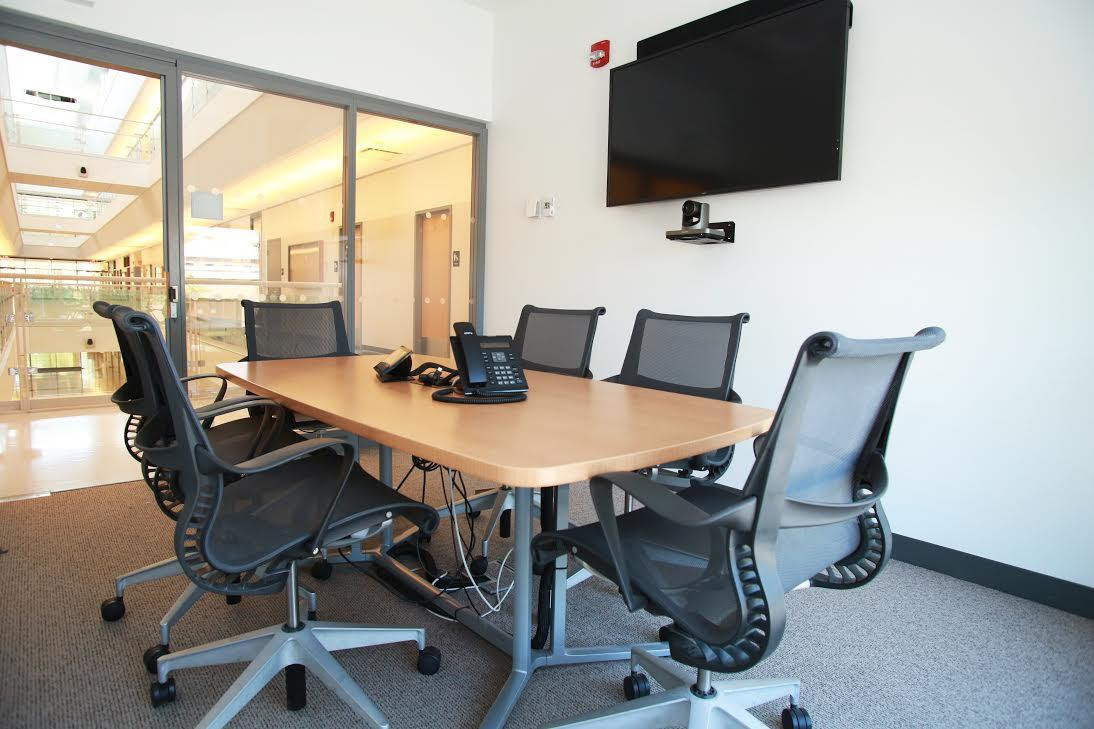 Ruland noted that ClearOne’s Beamforming Microphone Array 2 was so effective, that despite the size of the room, they only needed one of the ClearOne mic set-ups.

“All the audio problems we were having were solved with just the single installation. We dropped it in the middle of the room and it worked perfectly, zero audio issues ever since,” says Ruland. “We had several ClearOne Unite 200 PTZ cameras installed in some of our other conference rooms. This was great as instead of having to use a hard video codec for video conferencing, these cameras let the user, because they have a USB interface, use Skype, Hangouts or Webex – anything they want really. Again, very flexible and allows us to give users choices.”

Ruland is excited over what the ClearOne VIEW Pro technology is allowing his department to do with the video wall.

“The video wall is also very scalable and we can stream to it and customize the layouts in any way, shape or form we want,” he says. “It is just a really cost effective way for us to do just about anything we want to do with it. The ClearOne tech is even allowing our research labs to do interactive content using tech like facial recognition and we are streaming that right to the video wall.”

Schappert has worked with ClearOne in the past and along with being a fan of their products, he is also bullish on the full support they offer integrators. “ClearOne’s commitment to offering the industry’s broadest range of solutions, in-depth product support and training coupled with a string of successful ClearOne installations under challenging circumstances made the decision to spec ClearOne products into the new computer science building a no-brainer for us,” he says.