The Special Olympics World Games 2019 were hosted in Abu Dhabi, United Arab Emirates in March 2019 for the first time in the Middle East North Africa since the movement’s founding over 50 years ago. The Crown Prince Court led the winning bid efforts with a mission to promote positive social change for people with intellectual disabilities and create a more inclusive society.

Special Olympics World Games Abu Dhabi 2019 hired CreatorUp to help showcase the Abu Dhabi World Games as the largest and most unified games ever held for the 50th anniversary of the Special Olympics. The goal was to generate exciting content, using the latest technology, to inspire 7,000+ determined athletes from 195 nations.

CreatorUp is a digital creative studio and leading digital media training company that empowers leading brands, such as Google, YouTube, SamsungVR, and AT&T to connect with audiences worldwide through cutting-edge video production services and training solutions.

CreatorUp’s team kicked off the project by traveling around the globe to meet some of the awe-inspiring athletes and produce immersive, pre-event video content in preparation of the first World Games to be held in the Middle East.

To reach that goal, CreatorUp developed 360-degree virtual reality experiences that offered fans from around the world the first-ever opportunity to engage with Special Olympics athletes in an unprecedented, immersive way: through Samsung VR headsets and a dedicated Special Olympics World Games Abu Dhabi 2019 YouTube channel.

A series of moving documentaries gave viewers an inside look into the homes and hearts of athletes, their families and communities, and the 21,000 volunteers who made this global gathering of determined athletes possible.

The visually arresting 2D and 3D digital content showcased the impressive athletes at their best, in new ways that transcended the Games into a universal story of human spirit and captured their inspiration in a timeless format for generations to come.

In addition, the videos generated awareness of the UAE specifically as an inclusive place – a place that champions and values people of determination, as well as enhancing awareness of it as a destination. 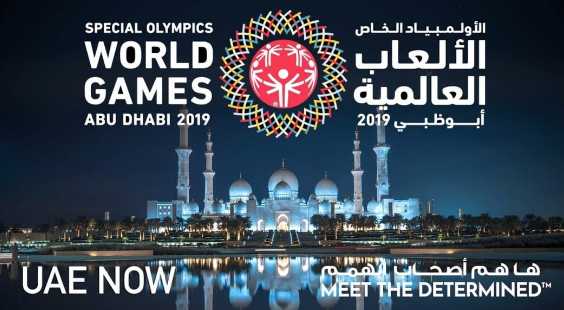 This content was then seeded out, leading up to Special Olympics World Games Abu Dhabi 2019, to generate awareness of the upcoming event and promote the 50th Anniversary of the Special Olympics.

The CreatorUp team expanded upon the pre-event momentum by providing a live daily show that was broadcast on a dedicated YouTube channel during the Opening and Closing Ceremonies as well as throughout the World Games. This is the first time any form of Olympic

ceremony has been broadcast live in 360, enabling families from all over the world to watch athletes from their nation participate.

Coming full circle to truly empower the Special Olympics brand, CreatorUp is making a final documentary called “Life After the Games,” highlighting the local impact the World Games had on the students, volunteers and organizations involved, and illustrating how the UAE has changed the narrative of this exciting global event.