Hollywood Park’s SoFi Stadium is the new home of the Los Angeles Rams and Los Angeles Chargers NFL football teams. Like any stadium, they needed video walls hanging over the field to show replays, scores and more.

In order to house two professional NFL teams, the stadium needed to stand out among the rest of the league. They looked to install a number of systems, highlighted by a larger than life videoboard. 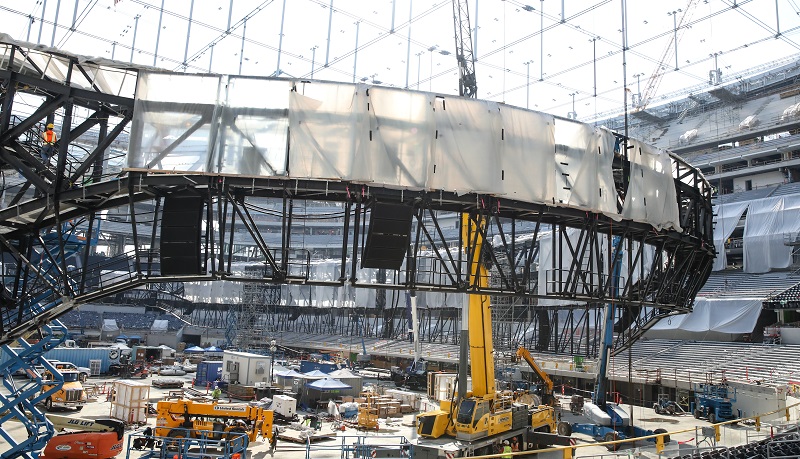 Samsung’s outdoor LED products were exclusively used to build SoFi Stadium’s 70,000 square-foot dual-sided center-hung videoboard and five levels of fascia display which will be used to elevate the fan experience to unparalleled heights.

The state-of-the-art videoboard not only features the most LEDs ever used in a sports or entertainment venue, but also has the first and only 4K end-to-end video production in a stadium.

Built for the future, the videoboard has the largest LED content playback system ever deployed. With nearly 80 million pixels spaced 8 millimeters from center to center, each panel can be uniquely or congruently programmed with statistics, live and/or animated content.

The largest panel is almost 40 feet or four stories tall; its smallest panel is nearly 20 feet or two stories tall. Its unique size and shape make it wider than the field of play and offers fans a spectacular view from anywhere in the stadium, enhancing the action taking place on the field.

The different sizes of the video panels are designed to serve spectators in every seat, from the sideline to the upper deck.

Built into the videoboard is a state-of-the-art JBL audio system with more than 260 of the stadium’s total 4,500 loudspeakers.

The stadium LED videoboard sound system accounts for half a million of the 1.3 million watts of Crown Audio amplification in the venue. 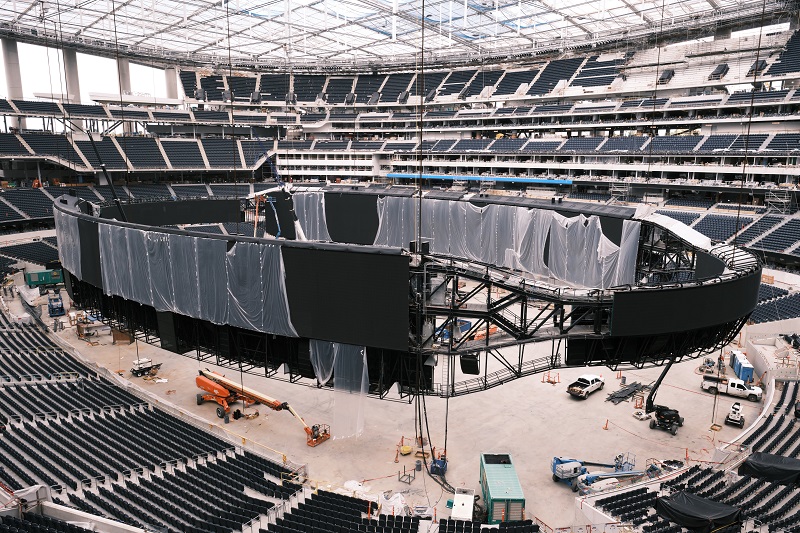 “We are proud to outfit the stadium with an iconic, first of its kind, double-sided 4K LED display and additional Samsung digital signage technology to ensure that each fan has a unique experience every time they visit Hollywood Park. SoFi Stadium will instantly become one of the NFL’s most talked about stadiums and Samsung is honored to be a part of its history from the start,” says Patz.

“The Samsung LED technology represented in the videoboard at SoFi Stadium is unlike anything fans have ever experienced,” says Jason Gannon, managing director, SoFi Stadium and Hollywood Park.

“The design as well as the board’s video and audio capabilities are the first of their kind in sports and will set a new precedent for the in-stadium experience.”

This cutting-edge technology within this 298-acre sports and entertainment destination in the heart of Los Angeles will set a new standard for the fan experience.

SoFi Stadium and Hollywood Park represent the future of sports and live entertainment. Samsung is excited to work with Hollywood Park to enhance, improve and develop dynamic and innovative technology to improve the guest experience for years to come.

Read Next: How Technology Can Help Save Canceled Tech Events

“As sports and concerts begin to come back, stadiums need to deliver a new kind of experience to their guests every time they step into the venue that provides customers with safety information and overall peace of mind,” says Brett Unzicker, Vice President, LEES, Display Division, Samsung Electronics America.

“At Samsung, we understand how using the latest technology in digital signage can help partners like Hollywood Park not only elevate the overall fan experience, but also ensure that safety is top of mind to all.”