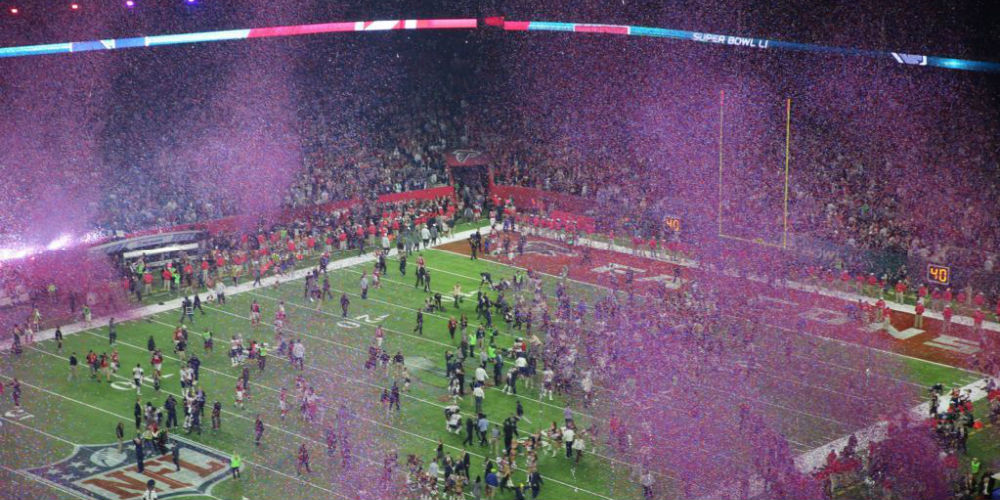 The Super Bowl draws in over a hundred million viewers, making it not only the largest event of the year for American football fans, but for the press as well. Every year, media outlets from around the country travel to the host city and set up in a venue dedicated to the press.

Coined “Radio Row”, this weeklong promotional event leads up to the Super Bowl game on Sunday, giving media a chance to interview with current and former football players, sports commentators, and celebrities. For the past twenty years, sister radio stations KTBB 97.5 FM News & Talk and KRWR 92.1 FM The Team Sports Radio have covered the Super Bowl from Radio Row. After years of traditional audio coverage, KTBB and KRWR Owner Paul Gleiser wanted to move to a live platform to capture his interviews in a completely new, visually engaging experience.

For a number of years, KTBB and KRWR recorded video interviews from a single camera and then uploaded the content to their websites and YouTube channels for video on demand (VOD) consumption. In preparation for the 51st Super Bowl, the stations wanted to provide an even better viewing experience with a multi-camera interview setup that would switch between the guest and host, all while streaming live to a social media platform.

Paul Gleiser researched video switcher and encoder options and discovered a bundle from a photo and video equipment retailer. The package included the Matrox Monarch HD encoder appliance and a Roland V-1HD video switcher. With the hardware bundle, KTBB and KRWR could simultaneously stream and record, and reach their social media followers through Facebook Live. “For us, the bundle was key for what we were trying to do,” exclaimed Gleiser. “Doing a live multi-camera shoot, and being able to record it at the same time—it was perfect!”

Super Bowl LI was fast approaching, and the Monarch encoder and V-1HD switcher were scheduled to arrive only 10 days before the event. As soon as the bundle arrived, Gleiser contacted Matrox’s support team to ensure a smooth setup for the event. “I was so impressed with Matrox’s tech support team. Not only did they help us transition from the single- to dual-camera platform, but they also followed up to make sure everything was going well,” says Gleiser. “An exemplary experience—beyond anything I have experienced from a tech company in a long, long time.”

The installation included a two-camera configuration—one camera focused on the guest, and the second towards the host. HDMI outputs from both cameras, and a laptop (to generate lower-third graphics) were connected to the Roland V-1HD switcher. Another HDMI cable connected the switcher to the Monarch HD appliance. An audio mixer was used to capture sound from two microphones positioned near the guest and host. An analog connection was then made from the mixer to the Monarch HD’s analog stereo input via 1/8” jack. Streaming and recording destinations as well as encoding parameters such as resolution and bitrate were simple and intuitive for Paul’s team to configure using the web-based Monarch Command Center. With minimal set-up time and production costs, KTBB and KRWR were ready to broadcast.

Live, multi-angled video interviews are now streamed in 720p directly to Facebook Live via RTMP, with laptop-generated “title” graphics superimposed onto the webcast in real time; these titles display the interviewee’s name, the interview topic, sponsor information, and the like. VOD content is simultaneously recorded in higher-quality 1080p on to the SD card inserted in the Monarch HD. Interviews are captured in a single live shot by switching between the two cameras, and once encoded, are immediately available for editing without the need to transcode. This makes for a quick and seamless post-production turnaround involving a simple trimming exercise in Adobe Premiere Pro at the beginning and end of each interview. Interviews are then uploaded to the stations’ YouTube channels, with the YouTube links embedded within their respective websites.

KTBB and KRWR are continuing to expand the frontiers of what fans can expect from their favorite radio stations. At one time, it was unthinkable that a station on Radio Row would even consider video. Today, thanks to the bundle that features the Matrox Monarch HD encoder, they can webcast multi-camera, fully integrated, broadcast-quality video interviews to Facebook Live, or various other video hosting platforms, and record for VOD.

Encouraged by the positive experience using Monarch HD at Super Bowl LI, the stations have since used the products to cover various high-profile corporate functions and political events. Gleiser already plans to use Monarch HD to cover next year’s Super Bowl and is excited about the future possibilities the complete solution has to offer.

Gleiser says, “With the two video cameras that we already own, the switcher, and the exemplary Monarch HD—we can go live anywhere! It is pretty amazing.”