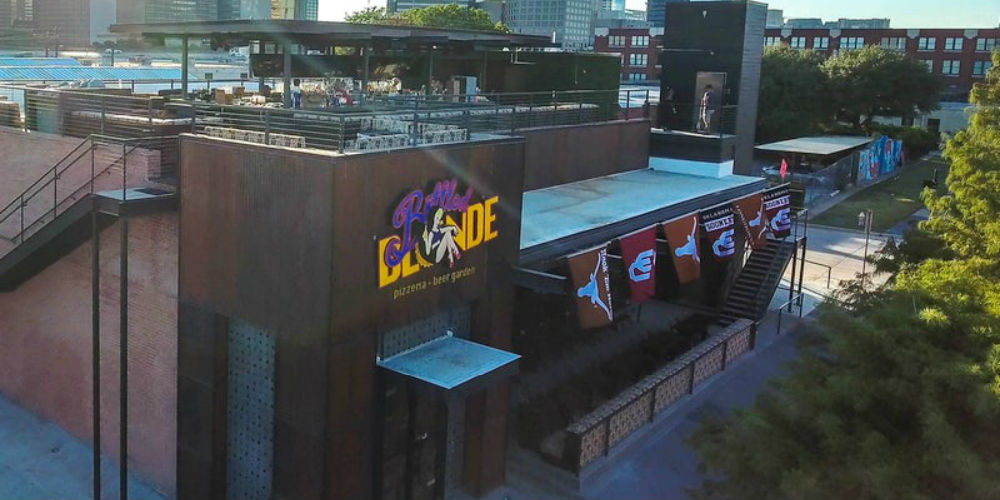 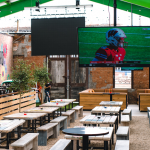 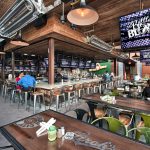 Based in Scottsdale, Arizona, Evening Entertainment Group (EEG) owns and operates a number of clubs, bars, restaurants, and event spaces, each packed with AV technology while offering a distinct ambiance.

All of the AV installations are done in-house by Jason Jones from LTJ Systems (LTJ) which does sound, video, intelligent lighting and anything new with tech — such as cold fire spark machines, cryo fx blast systems, and 5000lb hydraulic lifts for booths so a party can be lifted 5 feet into the air when ordering bottle servic

The company’s latest venue — Bottled Blonde Dallas — sits in the heart of the art district of Deep Ellum. Opening its doors in October 2017, the pizzeria and beer garden consists of 10,000 square feet of indoor restaurant and bar space as well as more than 2,500 square feet of outdoor dining and lounge space, known as “The Rooftop” and “The Backyard.”

EEG’s approach to video distribution has evolved over the years. In the beginning, at most of its locations, the company used simple matrix systems connected to a single DirecTV box behind a TV. These systems would only allow staff to switch between one input and one output; they would just switch over to HDMI2 on the TV if patrons wanted to watch video from a second source.

Later, EEG began using a single splitter to distribute one input to any number of screens. However, in addition to limiting the combinations of inputs and outputs, these systems would frequently fail. As the company’s properties became more sophisticated — and patrons began demanding a greater variety of content on multiple screens — EEG started using selector boxes. Unfortunately, the failure problem continued.

In the beginning, LTJ had used simple matrix systems connected to a single DirecTV box behind a TV at most of its locations. That system would only allow the operator (usually a bartender or a manager) to switch between one input and one output. If patrons wanted to watch video from a second source, the bartender would just switch over to HDMI2 on the TV. Later, LTJ began using a single splitter that would allow one input to go to any number of outputs (screens). The problem with that HDMI splitter system, besides limiting the combinations of inputs and outputs, was that it would frequently fail.

Over the years, as EEG properties got larger and more sophisticated, and patrons demanded a greater variety of content on multiple screens, LTJ began upgrading to a slightly larger matrix — a 4-by-X selector box. Through research and experimentation, LTJ refined the system at each new property, but the failure problem continued.

For example, the system would need to accommodate HDMI2 inputs from a computer or other media to allow for background feeds, such as displaying multiple logos alongside video content during a corporate party. LTJ wanted a system that would allow for redundancy, so that if one DirecTV box failed, it wouldn’t take the entire system down with it. And most important, the system had to be reliable — prior to this installation LTJ wasn’t using matrix systems because of the dependability issue.

LTJ chose Just Add Power’s 3G PoE series of transmitters and receivers along with DTVGameControl’s simple control solution in the Dallas location after having great success with both at a similar installation at Bottled Blonde Chicago. While there are many less expensive matrix systems on the market, Jones found J+P systems to be not only more reliable, but capable of handling many more functions than those other systems. The reliability alone was well worth the investment.

The Just Add Power 3G VBS-HDIP-518AVP receives, scales, and transmits signals to and from all sources to the selected screens, all while ensuring there is no video interruption.

LTJ installed the Just Add Power boxes in a rack along with other equipment necessary to run the entire video distribution operation, including all the DirecTV boxes; DTVGameControl’s iPad, floor plan-based application is ideal for controlling and managing DirecTV Receivers, Video Tiling, Video-Walls even Audio in Sports Bars and Restaurants. Setup time for this control suction is under thirty minutes.

While It easily controls which source is being played on which display, the GameDay tabs and guide features really set them apart from the rest; and a Luxul XMS-7048P, 52-port stackable gigabit PoE+ L2/L3 managed switch (that manages the wireless network. Rather than external power, the Just Add Power receivers and transmitters run on Power over Ethernet through the switches, which means there are no extra cables involved.

Especially useful is the Just Add Power VBS-HDIP-718AVP transmitter’sCEC command feature, which gives managers and bartenders the option to turn all TVs — or TVs in different zones — on and off from DTVGameControl application instead of having to control them with a remote one by one.

It works by sending a signal from the iPad to the Just Add Power transmitter through the HDMI cord, meaning the TVs turn on and off remotely from the iPad through the existing equipment and the same cord that delivers the video. Again, there are no extra cables to contend with. And it saves managers the time and headache of controlling and finding games on more than 50 TVs individually.

When construction wrapped on Bottled Blonde Dallas, Jones and his team had mere weeks to install and commission the entire video distribution system. Jones was able to prewire and preconfigure the Just Add Power system ahead of time so that when the time came, his team could simply add the box to the rack, plug in a Cat5 and an HDMI cable, and installation was complete.

From there they used the Just Add Power configuration tool to configure the rest of the system, which took about 30 minutes. And it was done! The plug-and-play aspect of the J+P system not only saved days of installation time, but it meant Jones also didn’t have to worry about DirecTV boxes, extra cables, or a background splitter system.

“I could get the place done within three weeks, with 100 plus TVs, because of the simplicity of Just Add Power system together with Luxul and DTVGameControl,” Jones said. “There’s a lot of programming involved, but at least as far as installation, I just had my guys in the field plug everything in and be done. That’s how easy it was.”