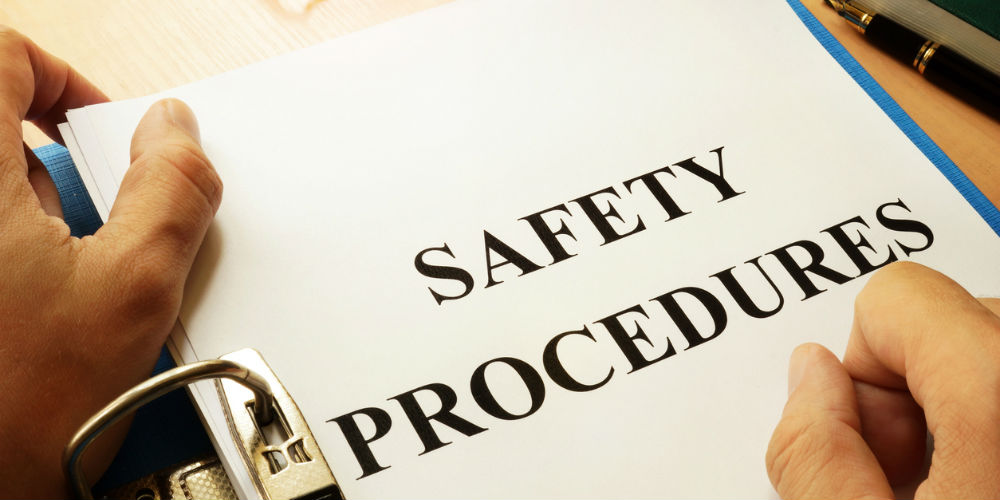 Safety procedure plans are often state mandated, but even when they aren’t many companies wish to provide them to employees in order to minimize potential injury, illness or even death during an emergency. The problem, for many, is getting these documents into the right hands at the right time. As you’ll see, when that doesn’t happen companies end up paying a premium in compensation, and worse, employees end up hurt or worse. But there are ways for companies to ensure the documents are with the right people when they need to be.

As is evidenced by the statistical data that follows, there have been periods of reduced workplace injuries and deaths. The fact is that these reductions have taken a good deal of time and effort as well as the creation and passage of new regulations. And yet, workplace injuries continue to be a major source of pain and financial loss to both corporations and those who fall victim to accidents while on the job. Although major strides have been made to reduce injuries and deaths, there is still a long way to go.

“Most Americans between the ages of 22 and 65 spend 40 to 50 percent of waking hours at work. Every year millions of Americans suffer injuries and thousands experience deaths in our workplaces. Yet

little effort has been made to estimate either the extent of these injuries, deaths and diseases or their cost to the economy. Thus, important questions about workplace safety and the economic resources expended due to workplace health problems remain unanswered.” (Costs of Occupational Injuries and Illnesses, authored by J. Paul Leigh, Steven Markowitz, Marianne Fahs, and Phillip Landrigan. Excerpted with permission from Costs of Occupational Injuries and Illnesses [University of Michigan Press, 2000])

Of these 2.8 million injuries, transportation-related incidents accounted for 40 percent–23 percent via roadway incidents; violence and other injuries inflicted by humans or animals accounted for 16 per- cent–9 percent resulting in death by homicide; 8 percent due to injuries by exposure to substances and environmental contaminants; 17 percent due to falls, slips and trips of which 14 percent involved falls; 11 per- cent where workers were struck by objects or equipment; and 3 percent by fires and explosions.

Of the 4,679 workplace fatalities that occurred in 2014, 8 percent were female and 92 percent male. In terms of the 272.7 million hours worked during 2014, women accounted for 43 percent and men 57 percent. In terms of dollars and cents, “Nonfatal workplace injuries and illnesses are estimated to cost the U.S. economy approximately $200 billion annually” (Nonfatal Work-Related Injuries and Illnesses — United States, 2010)

In terms of lost time on the job from an employer’s point of view, “In addition to their social costs, workplace injuries and illnesses have a major impact on an employer’s bottom line. It has been estimated that employers pay almost $1 billion per week for direct workers’ compensation costs alone.” (Business Case for Safety and Health by OSHA)

Having a written emergency response plan in place for your workforce is essential to minimizing the number of injuries and deaths that occur when something bad happens in the workplace. Knowing what to do, when to do it, and how to do it are essential elements in minimizing injuries and deaths. It inevitably requires focused study, planning, training and precise implementation.

“Where required by some Occupational Safety and Health Administration standards, firms with more than 10 employees must have a writ- ten emergency action plan; smaller companies may communicate their plans orally. Top management support and the commitment and involvement of all employees are essential to an effective emergency action plan.” (OSHA Fact Sheet, OSHA)

According to OSHA, the key elements of any emergency prepared- ness response plan include the following:

The traditional method of creating an emergency preparedness program consists of procedures, maps and diagrams, as well as other detailed information, as required by law, all put in writing. Included should be escape procedures and route assignments that take into consideration all potential scenarios, special shut-down procedures for employees, a system to determine who’s missing, procedures used during rescue attempts, medical duties for employees, a rapid and efficient means of incident reporting, and more.

In the modern, high-technological world we live in, there’s a much better way to provide your employees with access to a fully developed, legally- compliant emergency preparedness plan than in hard-copy format. The best way to do this is to take advantage of today’s electronic mobile devices.

“Modernizing America’s alert notification apparatus is imperative and can be done by leveraging mobile platforms and smartphone technolo- gies to more effectively disseminate crucial, actionable information to civilians in crisis situations,” says Timothy Coleman, author of Smart- phones: The Next-Generation Emergency Alert System. “Integrating alert notifications across dynamic smartphones and other mobile platforms can be achieved to ensure that an updated system leverages smart- phones and geo-location features of mobile systems while also being extremely resilient and optimized for fluid and ever-changing operational environments.”

The Pew Research Center reported that as of January 2014, 58 per- cent of U.S. adults own a smartphone, and 67 percent of those check their phones regularly – even when they haven’t received a message or alert. As far as those who do not have mobile communication, recent studies also show that these individuals are likely to be no more than 3 feet away from someone who has a cell or smart phone, which means they likely will know of a pending emergency along with everyone else.

As far as mobile devices in the workplace are concerned, more

than 66 percent of 5,000 individuals that participated in a Qualcomm study said they take their mobile device to work with them. In another 2014 Harris poll for CareerBuilder, 24 percent of workers polled said they spend at least one hour on their mobile device in the workplace each day. Even those who choose not to use them–because of company policy–still carry them. It’s this widespread dedication to mobile devices that makes smartphones an ideal means of alerting a large number of people of an emergency situation as it unfolds.

One way to make your emergency preparedness information available to all stakeholders in your organization is to upload it to their smartphones and tablets. By doing this, when a situation develops, each individual in an organization has ready access to the information he/she needs to respond in an appropriate manner.

“Perhaps the biggest downfall of a pure paper format is that it is nearly impossible to share information throughout a large group, particularly in an emergency situation. Instead, plans need to be adapted to work with existing technological solutions that are inherently more accessible. For example, smartphones and other mobile technology are becoming ever more ubiquitous, and serve as a proven platform in not only voice communication, but often information sharing and emer- gency notification.” (Mobilize Your Crisis Plan for Improved Emergency Response, FacilityDude)

One example of this is Safety Center by FacilityDude. All documentation associated with the plan is contained within each stakeholder’s mobile device as opposed to a centralized depository. In this manner

if cell service should fail at the time of an emergency, such as severe weather or exposure to a gas leak, all the information needed is still present and available to each person individually through their mobile device.

Safety Center is customizable to fit almost any need. The creation and definition of the various categories and data uploads takes place through a user portal equipped with a simple, easy-to-use interface. Documents are uploaded via this central point of connection and then distributed to each mobile device through the Internet/cellular services.

Tagout/Lockout is a category that pertains to the act of securing potentially dangerous machines as well as sources of energy, such as electrical, mechanical, pneumatic, hydraulic, chemical, thermal, and others.

Confined Spaces is a category that includes small work spaces where there are a limited number of entrance and exit options and where work often is performed on an as-needed basis. A permit often is required for these locations when a hazardous issue or condition exists. Examples include atmospheric conditions, such as a substance that can engulf or entrant a worker.

Job Hazard Analysis section deals with common hazards that exist as a consequence of a particular type of work. If left unchecked and out of control it can possibly result in the death or injury of workers who perform them. Whether a workplace job is dangerous can be determined by a job hazard analysis. If found to be dangerous, procedures must be devised and documented so all stakeholders who work in these areas know the best methodologies by which to do the job as well as the procedures to follow if the unthinkable should happen.

Safety Training section is that portion of the safety procedure documentation where workers in the workplace go to find training materials pertinent to the jobs they do on daily basis. This section can house specific training documents, created in- or out-of-house, for the purpose of assuring that workers know and understand the fundamentals associated with workplace safety. Special links also can be offered to special resources on the World Wide Web.

Incident Report is a category or section where a manager, foreman, or other worker submits details regarding a workplace accident. The report, when brought up, initially verifies the physical location where the submitter is at the time of the report. When submitted it provides all necessary details of the event.

yet to be performed is defined with the intent to solicit permission or authorization to do the work within a confined area. Some facilities also use the permitting process as part of Lockout/Tagout operation.

The Weather Emergency button provides information on what to do in the case of severe weather. Possible conditions include extreme cold and heat, flooding, hurricanes, tornadoes, violent thunderstorms, as well as snow and ice storms, to name only a few.

Fire Emergency offers information specific to a facility, such as address, all outbound emergency numbers, as well as general instructions as to what to do and not do if a fire emergency should occur.

The Medical section contains general first aide information, such as the name and contact data for the nearest hospital(s), who to call in the organization, and where the first aide kits are at in the building.

The Contacts section provides all necessary information for reaching company personnel as well as state and federal authorities. Examples of the latter include the local fire department, city police and/or county Sheriff, state emergency numbers, and contact for FEMA (Federal Emergency Management Agency).

These types of products allow you to create all of these emergency categories as well as others as the need arises. Making these resources available to all stakeholders is essential in an emergency situation. Having valuable mobile applications that can deliver these documents to the right people at the right time can be essential to a successful outcome when an unexpected tragedy strikes.

This article was originall published in 2016.