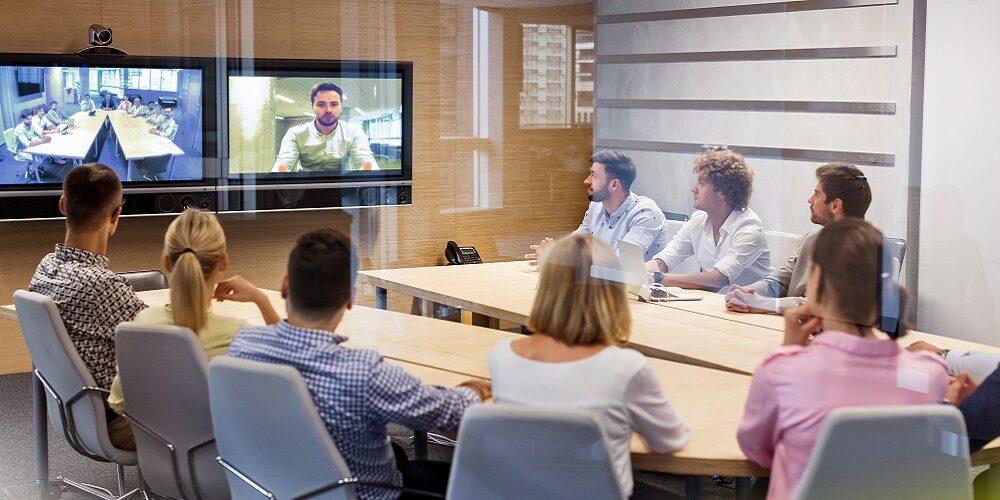 Despite nearly three years of distributed work forced by the COVID-19 pandemic, many organizations have still not yet equipped their offices and end users with the tools and technology necessary to carry out hybrid meetings.

With 2023 around the corner, IT budgets should reflect those necessary conference room upgrades and end user tools, unified communications expert say.

Numerous studies of end user habits suggest that a large majority want their organizations to retain some sort of flexible work model that allows them to choose where they want to work, forcing IT and facilities professionals to rethink the modern office and the technology deployed within.

The challenge of hybrid meetings

However, one such study from Crestron suggests that most organizations are behind when it comes to deploying technology necessary for effective hybrid meetings. The Rockleigh, N.J.-based control and automation systems manufacturer’s survey of more than 830 mid-level employees and 502 IT decision makers found that 41% say that half or fewer of their workspaces are equipped for full hybrid engagement.

Sam Kennedy, senior director of product marketing at Crestron, “full hybrid engagement” essentially boils down to the ability to clearly and effectively share audio, video and content with remote participants.

“The reality is that the adoption of collaboration technology–a microphone, speaker, camera and some level of content sharing–is not pervasive within most rooms within most organizations,” Kennedy says.

When organizations sent everyone home during the worst parts of the pandemic, no physical conference rooms were being used and users saw their coworkers in a box on their meeting interface. As users begin to go into the office, users everywhere need that same kind of experience.

Crestron’s research also found that meetings must always be anticipated to be hybrid, as 84% of employees expect at least one remote participant to join their virtual meetings.

Remote, hybrid or flexible work models are not the same across the board, and different teams within the same organization might even have different distributed work policies.

“You want to enable as many spaces as you can with the right technology,” Kenney says.

Meeting equity and why it is important

Also important to the equation is ease of use and ensuring employees have similar experiences at home and in the office, a concept that the collaboration industry calls meeting equity.

According to Troy Jensen, senior manager of global accounts at audio company Shure, end users over the last two-plus years became accustomed to the Brady Bunch layout where each participant was framed in a head-and-shoulders shot in their own box on a meeting interface.

However, the typical meeting room layout of a long rectangular table and a single camera at the front of the room can be a difficult transition from the head-and-shoulders view. That long camera shot can make it difficult for remote participants to see who is talking.

“Everyone needs to share the same amount of screen space so we can see who’s speaking and who’s trying to address and communicate a thought and idea,” Jensen says.

Kennedy offers a similar definition of meeting equity, saying equity is about getting all users on the same playing field. For example, if three people are in the office and three people are remote, the in-office participants can look at each other in the eye, talk to each other when they’re on mute and pick up on body language and physical cues.

“That brings down the equity of experience for everybody else on the call,” Kennedy says.

Essentially, this creates a scenario in which a remote meeting participant would see one window with three in-office employees and another two windows for each remote user.

“There’s a need to ensure that the office is a destination with amenities, comfort and ease of use,” Jenson says. “There will still be some of those standard conference room spaces, but I see a lot more need for [huddle rooms] and flexible training rooms because the room needs to be different on any given day depending on who’s coming into the office.”

While Microsoft, Zoom, Google and others are trying to solve meeting equity issues with their own built-in intelligent audio and video features, organizations can also leverage advancements in meeting hardware to help keep in-room participants seen and heard equally.

“It is a combination of the platform you plan to use and the technology you’re going to deploy to accomplish that,” Jensen says.

As an audio expert, Jensen says the audio component is important to not overlook, as meeting rooms are being reconfigured to accommodate hybrid workforce. IT professionals and their service providers should reevaluate the audio needs of their meeting spaces and ensure there is adequate coverage.

“When someone is hard to hear, you almost dismiss what they’re going to say,” Jensen says. “Without audio, [meeting spaces] are just fancy surveillance.”

For Kennedy and Crestron, the solution comes in the form of intelligent cameras and multiple monitors in larger meeting spaces. The company earlier this year introduced Sightline, a meeting room experience designed to promote natural conversation, meeting equity and enhanced collaboration for hybrid meetings.

Via multiple monitors and intelligent cameras, the technology displays a view of the entire room while framing individual speakers.

The vast majority of organizations won’t be confined to a single office building, so they’ll likely need to communicate and collaborate outside of their four walls. This is increasing the value of meetings and meeting spaces.

“If you’re not already looking at your strategy around hybrid work, it’s a great time to be doing so,” Kennedy says.