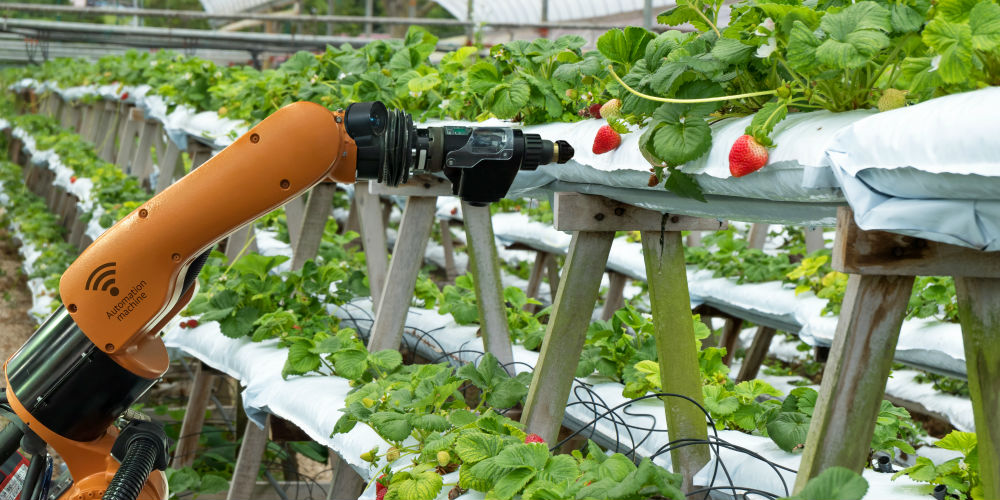 In an effort to make fresh, locally-grown vegetables more readily available, a startup called Plenty is designing and building indoor farms manned by robots. Led by CEO and cofounder Matt Barnard, the company began by inhabiting a relatively small former electronic distribution center in one of South San Francisco’s industrial neighborhoods. After a $200 million investment from Southbank, the farm has expanded and plans to take on spaces in larger cities.

Pretty much everything that happens within the indoor farm is automated, according to Fast Company, with some yellow robots packing trays with soil and seeds and other trimming towers of kale. The growing room is monitored by infrared cameras and sensors to control the indoor climate, whilst a sophisticated software keeps the detailed “recipe” in check, adjusting the amount of light and water needed to create optimal flavor.

One of the company’s most unique components is its “sensory” department, which evaluates the flavor of each crop and tweaks the growing environment recipe for the next batch. “We essentially coax a different flavor profile out of the plants by giving them the right recipe,” says Barnard. “We take those plants and analyze what’s in them, and then we work to give subsequent crops exactly the right recipe so that these things are lovable. And that’s critical. That’s how we get to 10-year-olds asking their mothers for our kale.”

Energy is one of the bigger barriers in making the argument for indoor farming, as the lighting is a large cost. But Plenty has cut energy consumption by 80% per kilogram of plants grown. It also eliminates long supply chains, keeps the crops from sitting inside distribution centers for days at a time, costly transportation from farms far away from the vendor location, and reduces the likelihood of the crops getting contaminated.

Another major concern is that indoor farming is a sort of gentrification of the agricultural industry, though Barnard says he has no intention of putting traditional farmers out of business. The Plenty website quotes him: “We don’t have competitors and we aren’t out to get traditional farming…We are all in this together.