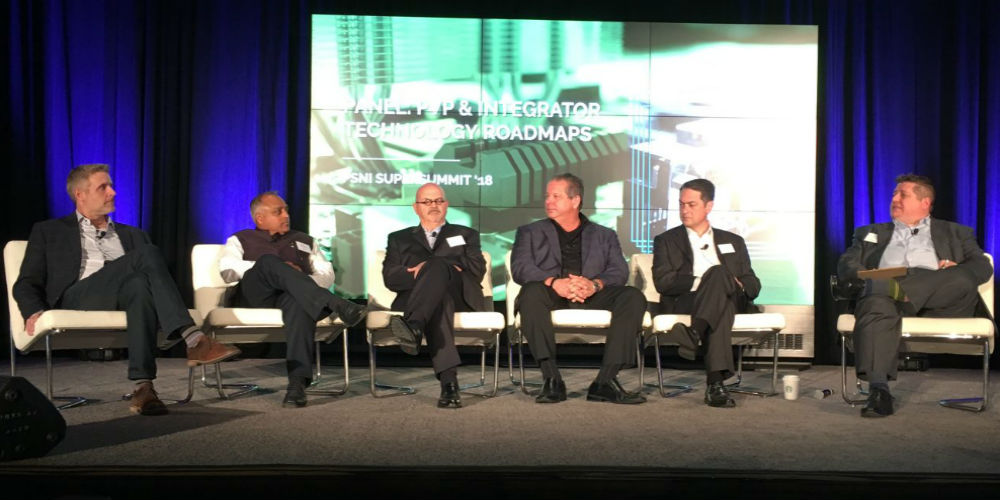 Growth and simplicity have taken on increased importance for AV integrators and their partners in the manufacturing world lately. During the PSNI Supersummit in Houston, panelists said they see how the industry is changing and know they have to do different things to survive and thrive through AV industry challenges.

“Our industry has a tendency to beta-test things in the field. It’s important to be slowly and methodically into the cloud. The pioneer gets the arrows, but we want to be forward-thinking.”

Rashid Skaf, president and CEO at Biamp, says the company is focused largely on growth under its new management, Highlander Partners, the latest example of private equity money getting into the AV space.

“Our goal is to double the company, then double it again,” he says.

Steve Alexander, sales director at Avidex, sees “a lot of companies moving toward unified communications and huddle rooms,” a nod to the simplified approach that means there are fewer all-in-one conference rooms on the horizon but still a plethora of opportunities for integrators.

In the Middle East and parts of Asia, Girish Narayan, founder and managing director at Granteq in Dubai, government agencies are becoming more accepting of AV upgrades and there’s more traction in retail, Internet of Things and augmented reality.

There’s a combination of physical and digital AV that Narayan called “phygital.”

“Everything over IP is a trend,” says Steve Durkee, president of commercial products for Milestone. “Everyone wants things to be simplified but then they want the tech to do all of these complicated things. We have to deal with that as manufacturers and as integrators.”

Machine learning is emerging as a trend those in AV must learn about and understand, says Skaf.

“We have to better understand usability and functionality of spaces,” he said during the PSNI Supersummit.

“We have to make it so people walk into a room and want to use it.” Alexander says that can come through building a “proof of concept” with a trusted client to see what they like—and what they don’t.

“That way, you’re not learning to shave on someone else’s face,” he says.

“We’re having trouble finding young people to do the work we need to get done,” says McCarthy. That include things like cybersecurity and IoT, which McCarthy calls “a buzzword like ‘service’ used to be.”

“We need to drive our own programmers or find a better way of looking cool to young people,” says Alexander.

With Alexa becoming more common in many households across the country and around the world, it’s only a matter of time before Voice Control technology is another regular attendee in those huge meetings. But it’s not as easy as bringing it from the living room to the board room.

“We need to manage the customer, who wants to embrace new things,” says Alexander.

“At home, it works about 85 percent of the time, which is fine when you’re trying to watch Netflix or turn off the lights, but there’s a different level of expectation when shareholders on the line,” he says.

Voice Control technology in the board room is “a natural evolution,” says McCarthy, one that started when DVD players moved from the home to the office in 1997.

“Since then, we’ve been playing catch-up.” That’s continued with iPads and other mobile devices to control meetings and systems.

Skaf is interested in how Voice Control technology will be implemented in corporate settings, asking, “How do we incorporate it so it solves a problem?” Durkee is skeptical, saying, “I’d like to know we’re doing it to create a better experience.”

Skaf has been a prominent figure in the mergers and acquisitions world and says to expect Biamp to be active in the market by later this year. He calls the consolidation and M&A activity not another one of these AV industry challenges, but “a sign of any mature industry.”

Durkee says “private equity firms see the AV industry as attractive,” especially on the integrator side, where there’s more ownership transition these days. It’s somewhat related to global expansion, he says, and for the first time “integrators and end users are both ready for it.”

Narayan says the flurry of activity allows integrators to “buy the expertise we need to coat the market.”

That’s part of building expertise in a variety of geographic and vertical markets as one piece of a global expansion strategy, he says.

McCarthy sees the M&A bonanza as a function of “people looking to exit with no plan” and “a lot of what we do is ubiquitous, such as collaboration, IT and digital signage. It’s forcing us to become more disciplined financially.”

“Customers are looking for a single partner,” says Alexander.

“One thing you have to do is balance the long- and short-term priorities of private equity.” Durkee agrees, saying, “They invest the capital but they already have an exit plan.”

This article was originally published on sister site Commercial Integrator.