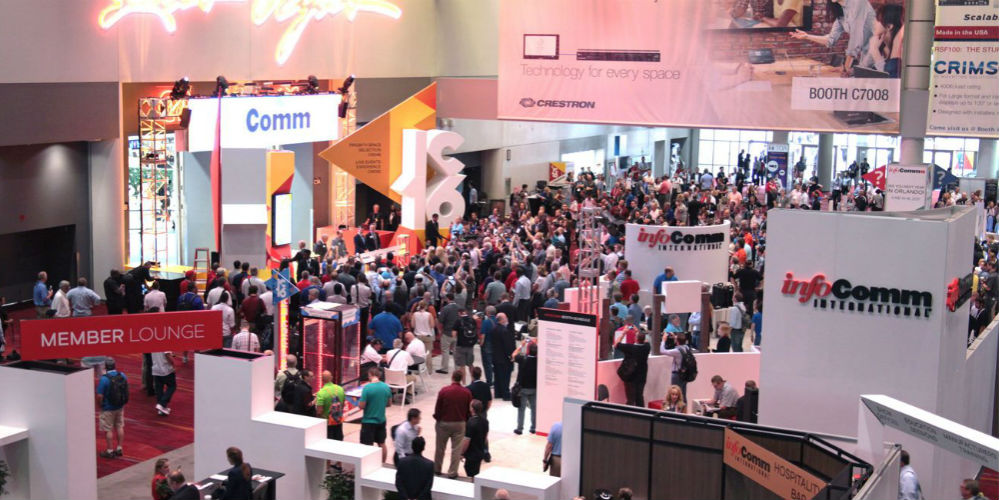 I started in the AV industry about a year ago — just two weeks before InfoComm. Heading into this year’s with 12 months’ more experience under my belt, I was curious to know if my expectations about the show match up with what the integration community says are the most important InfoComm 2018 trends.

Turns out that what integrators look forward to at InfoComm 2018 isn’t altogether dissimilar from what we at Commercial Integrator have been buzzing about.

After surveying a few AV industry veterans, here’s what we found to be the biggest InfoComm 2018 trends:

Yes, this is an important trend at EVERY trade show, but nonetheless, we think it is telling when many integrators all talk about similar brands. So here are a few manufacturers that received multiple mentions in our survey.

Biamp (booth #C1954) – the company debuted the new Devio collaboration platform at ISE in February — now, they’re using that technology to create “portals” that allow visitors to interact in real time with people across the world

“The last couple of years, it seems like companies are rolling out enhancements to existing product rather than introducing entirely new products,” says editor-at-large for Commercial Integrator Craig MacCormack. I guess only time will tell on that front.

President of Synergy Media Group Bill McIntosh says the InfoComm 2018 attraction he’s most excited to see the Integrated Life Pavilion. This is the space that demonstrates the future of IoT and AI in tech integration — “bridging the gap between consumer and commercial uses,” according to AVIXA.

While some tech curmudgeons — like our own Craig MacCormack (kidding, Craig) — get a little creeped out at the idea of smart devices listening to them, there’s plenty of evidence to suggest that AI and IoT has only just begun its takeover of pro AV.

“The solutions have been around for a few years, but we have to start looking at how our systems integrate into the larger ecosystems of our projects. How are we tying into the building management? How are we protecting our customers data and networks from malicious actors?” he says.

IoT serves as a training ground for many CEO and business operations clients as they learn how to implement control elements simply by asking their Alexa devices to play their favorite tunes at home.

Executive VP of LightWerks Communication Systems David Riberi says he has customers who want to learn more about voice control systems. The trouble, according to more than one integrator we at CI have spoken with on this topic, is getting the client to use it correctly.

It’s one thing to have a partial success rate when consumers use voice control at home… but if it’s faulty in the office, there’s unwanted weight on the integrators’ shoulders (even if it is the result of misuse).

Craig tells me he’s eager to land a meeting with somebody at the Microsoft booth (#N2814). But, as we’ve seen in previous years, that isn’t always easy.

Craig isn’t the only one who wants in on the Microsoft booth. Bill McIntosh says he’s excited to see what both Microsoft and Google Cloud (booth #N3114) “bring to the table.”

This could have something to do with the fact that some integrators are slowly accepting the idea that selling business data is worth their time. After all, integrators have access to equipment and endpoints. They’re already pulling info; it only makes sense to bring that together, aggregate it, and present it in digestible bites.

Frankly, we’re happy to hear that business data-related booth visits are on the agenda for many integrators as top InfoComm 2018 trends.