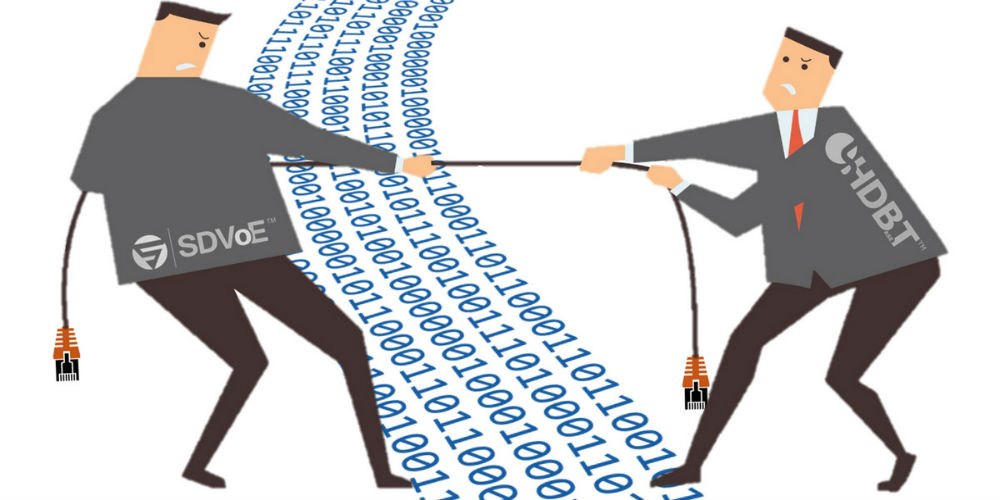 HDBaseT-IP vs. SDVoE is the smackdown in the commercial space, each vying to become the reigning standard for long-distance AV over IP.

“There is a battle about to start: SDVoE (Software Defined Video Over Ethernet) versus HDBaseT-IP,” says Paul Harris, CEO of Aurora Multimedia, a New Jersey-based manufacturer of video distribution systems.

“It’s already begun. The question is who’s going to win over AV over IP? This is going to be a really interesting matchup.”

On one side of the showdown is SDVoE from the SDVoE Alliance, which includes members Aurora Multimedia, AptoVision, Sony, Netgear, Christie, ZeeVee and others.

AptoVision, which recently sold to Semtech, is the driver of the SDVoE Alliance and now has the ever-important backing of the new parent company, a sizable semiconductor manufacturer. Harris believes Semtech will invest heavily in the category.

On the other side of the battle is HDBaseT-IP from the HDBaseT Alliance, which includes members Crestron, Extron, Samsung, LG, Sony, Harman, Aurora Multimedia and others. These companies primarily buy chipsets from Valens Semiconductor, the driving force behind HDBaseT.

The new protocol and strategy were introduced earlier this year at ISE 2017, shortly after the SDVoE camp launched its own Alliance. Both made their big European splash at ISE. Awkward.

At that time, Valens senior VP Gabie Shriki said he could barely comment on the would-be competitor because they were too new.

“We’ve been still looking at that and trying to figure out what this alliance is all about,” he said.

“I don’t know much about them, but what I do know is that with the HDBaseT existing alliance, with the HDBaseT-IP strong standard and strong ecosystem, what we have today with the introduction of HDBaseT over IP, I don’t see any need for a new alliance.”

Yet here we are.

The Need for Speed & Lossless Video

Driving this competition — and there are more than just these two — is the need for more bandwidth for multiroom video transmission that does not compress video and undermine visual imagery.

That need has driven the explosive growth of AV over IP in the market that can handle a 10Gbps signal versus the 1Gbps over traditional HDBaseT.

With that kind of compression, he explains, you lose enough information so that the images are “not visually lossless.” Also, HDR may not work well at a 20:1 compression.

“BlueRiver, which is a 10Gbps technology, can properly do 4K@60 4:4:4 with no detectable artifacts with or without motion,” according to Harris.

“HDBaseT seemed like it was a technology that was on its way out, but maybe we’re all wrong about that. Maybe we need this technology to be the fix for IP itself.” — Paul Harris, Aurora Multimedia

“10Gbps is the way of the future and the path for 8K. Once into those higher refresh rates and bandwidth, you must be on a 10Gbps system. Period.”

But problems still remain with 10Gbps, including heat output and price.

A 10Gbps wallplate draws much more power than a 1Gbps solution, thus creating a “heat problem,” according to Harris.

Also, the price points for 10Gbps switches are higher but they continue to come down every year.

The solution to those problems might lie in a hybrid HDBaseT-IP technology.

“HDBaseT seemed like it was a technology that was on its way out, but maybe we’re all wrong about that,” Harris says. “Maybe we need this technology to be the fix for IP itself.”

He says single- and double-gang HDBaseT-IP wallplates can be used to “bridge” IP and deliver 10Gbps 4K@60Hz 4:4:4 from the wallplate to the network. These wallplates would be less expensive than conventional 10Gbps A/V-over-IP transmitters and receivers.

Especially in the residential market, an HDBaseT victory might seem assured because of its big headstart in HDMI-over-Cat 5.

The platform is widely deployed by leading A/V manufacturers, whose compliant products are largely interoperable. The process has long been in place for certification and interoperability testing, the brand enjoys wide recognition, and the expansive base of existing partners and dealers provides a captive audience.

That said, SDVoE is raking in new partners on the commercial side, and products today are alive and installed.

On the other hand, Harris believes HDBaseT-IP products won’t be available for another two to three years. Even so, SDVoE’s headstart in this category doesn’t faze him.

Ultimately, it won’t matter because “the most important things in an AV over IP system are the network switch and the cabling,” he says. “Peripherals will come and go.”

He also takes issue with those who say HDBaseT today is just a placeholder for tomorrow’s IP-based distribution systems. There will still be a place for point-to-point HDBaseT, he insists.

“HDBaseT works wonderful for that. I wouldn’t change it… it’s cost-effective, low power, low heat, inexpensive, and easily distributed. IP solutions are best served for distributed systems, especially in digital signage or applications that require the equivalent of matrixing.”

Rumors of HDBaseT’s impending demise are greatly exaggerated, he claims.

“The reality is that the HDBaseT uses less power and it fits into smaller devices, the chipsets cost less money, and it’s been around for a lot longer. So at the end of the day, point-to-point, HDBaseT is here to stay.”

As manufacturers go, Aurora Multimedia has been on the cutting edge of video distribution technology for several years.

“Cutting edge? I love the bleeding edge,” says Harris, who is not only CEO/CTO of the company but also the chief designer.

He founded the company in 1998 and first started writing computer programs when he was just nine years old. Over the past 20 years, the company has developed several innovations in the video distribution space.

Among Harris’s biggest innovations is his patent-pending transceiver concept for video distribution versus a conventional transmitter (encoder) / receiver (decoder) topology.

“With a transceiver, you tell the device what it is going to become,” he notes.

“We’ve all been taught everything has an input or an output, but what if you could take away those constraints and choose the direction? There are no more inputs versus outputs, like a typical matrix of 8X8, 16X16, or 32X32.”

“The most important things in an AV over IP system are the network switch and the cabling. Peripherals will come and go.” — Paul Harris, Aurora Multimedia

Among the biggest benefits of using transceiver is the money savings in inventory for integrators.

No longer does an integrator have to worry about unused transmitters or receivers collecting dust in their stockroom.

The second big benefit is serviceability. Dealers no longer have to worry about carrying multiple SKUs for HDMI input and output cards both transmitters and receivers on the trucks.

With a transceiver, Harris says it is even viable for end users to purchase a single spare part and keep it on site, eliminating the need for a service call completely.

You can send signals in either direction versus a single direction “for the same price point,” claims Harris.

This enables Aurora’s A/V-over-IP system to be more than just a splitter or matrix, but the basis for a videowalls, image rotation, multi-windowing and seamless switching.

“Transceivers solve a lot of problems and simplify everything,” says Harris. At Aurora, it means the company itself can focus on having a smaller line card. “We are trying to make our product catalog as small as possible and make the ultimate single SKU product. That is our goal.”

Not to be Confused with IPBaseT?

In addition to its transceiver products, the company is aiming to take AV over IP one step further using a technology Harris calls IPBaseT: “It’s a simple concept… to create synergy between different standards that normally do not work together.”

He cites as examples such as the need for 10Gbps 4K@60 4:4:4 if you want to provide localized, real-time broadcast-quality, low-latency video, but at the same time transmit the same video over the Internet, which couldn’t handle the native file.

Another example is the H.264 compression standard, which is great for recording video and sending it via the web, but loses quality with color space conversion and macro blocking due to the technique and high compression of H.264.

“There is no one ‘right’ standard, they’re all right standards. The reality is that we need to use them all for AV over IP, not just one.” — Paul Harris, Aurora Multimedia

Harris says there are numerous examples of great standards that fit certain applications, but fall quickly by the wayside when used in the wrong application.

“The reality is that we need to use them all, not just one.”

IPBaseT takes different IP-based A/V technologies and blends them together to create the illusion of a natively integrated system.

In one implemention, for example, IPBaseT was used to meld two incompatible AV over IP protocols, Dante and JPEG 2000, into one integrated environment.

In this example,” Harris explains, “we took two standards that are totally incompatible with each other, integrated them onto the same network, and made them look like they were working together,” he says.

Other innovations from the company include reversible USB in which the company developed a circuit that reverses the flow of the USB, determining which side the host can be; and a circuit that, according to Harris, enables the world’s first 10Gig PoE-capable peripheral.

This article premiered on our sister publication, CE Pro.