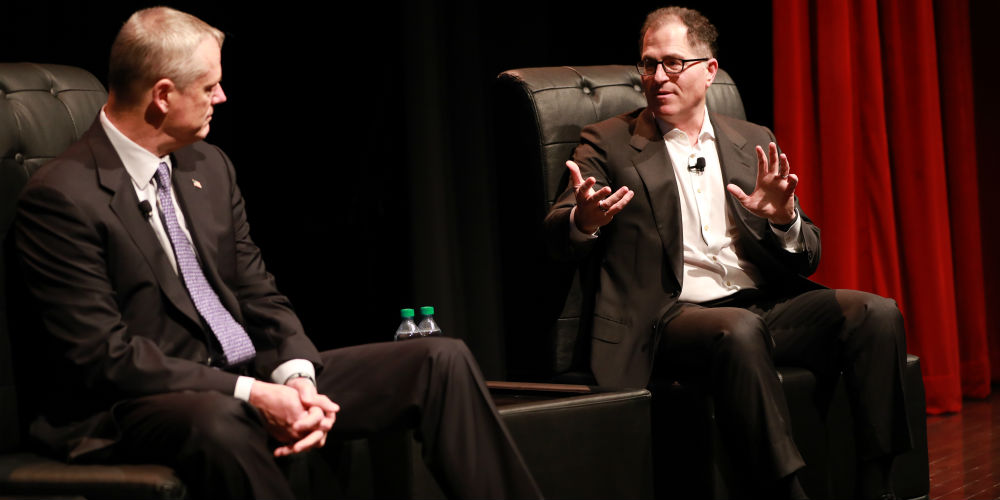 At Boston’s Museum of Science, in an auditorium just across from the paleontology wing, MassForward 2030 concluded with a fireside chat between Massachusetts Governor Charlie Baker, and CEO for Dell Technologies, Michael Dell. The discussion focused on the path – and potential obstructions – to reaching the technology goals for the Commonwealth that the public and private sectors have agreed upon by 2030.

MassForward 2030, an event put on by Dell Technologies for its employees and a number of guests from schools and businesses in Massachusetts and beyond, was a day of conversations on how the Commonwealth of Massachusetts can continue to lead on emerging technology and its implementation in the workplace.

While the discussions focused on the state in which the event was held, the insights coming out of it were valuable for any state or business.

The day culminated in a highly-anticipated fireside chat between Governor Baker and Michael Dell, where a moderator spurred conversations on topics from the biggest obstacles, to the hardships of recruiting tech leaders, to the need for diversity in planning and decisions for the future of technology.

The discussion brought forth plenty of great thoughts and insights about future technology. Here are ten takeaways that you’ll want to consider about the path of the technology landscape leading to 2030:

“I think we can all afford to build deeper and richer partnerships with machines. I think there are certainly lots of new skills that will be required. I think the pace of change is only going to accelerate,” says Dell. “I think our people will need new skills. We’re certainly doing a lot of re-skilling and re-training. But it’s also exciting because you can reimagine and recreate businesses.

“We need to make sure that the machines reflect humanity, and that they don’t take on the unconscious bias that we have as humans,” says Dell.

“Certainly the whole area of data science, analytics, AI, deep learning,” says Dell, “There aren’t enough people in the world that know how to deal with the massive data sets that organizations are starting to deal with. Very few organizations have even started to put their arms around this, and it’s not just business but also government. We’re facing a tsunami of data. If you think we have a lot now, you haven’t seen anything yet. When you connect everything in the world with sensors, it’s hundreds of billions of things connected. That amount of data has to be analyzed and turned into useful insights to create better outcomes and greater success.

The Economic Effects of New Technology

“I think one of the biggest challenges people are going to face is not that there won’t be a tremendous amount of information, it’s going to be how to figure out what the best way to actually create an economical and effective approach to dealing with all of this new information that’s available,” says Baker. “One of the downsides of a lot of data is you have to worry about false positives, and all of the issues that come with that. Separating the signal from the noise – that’s going to be complicated.”

What Makes a State Attractive to Companies

“What makes it attractive is the talent,” says Dell, “The quality of the talent. It comes from great universities. When we combined with EMC and VMware, almost 9,000 team members across the Commonwealth, incredibly talented people. We’ve been able to grow that business substantially, and it’s been a fantastic expansion of our business.”

Education Makes the Company, and the Technology

“It goes back to education,” says Dell, “How do you build the science, technology, and engineering skills? How do you make sure school systems remain incredibly strong? We figured out some time ago that trying to steal people from other companies just doesn’t work. The math doesn’t work. The only solution is to grow talent and develop talent from within our organization. There’s a big re-skilling element of that. How do you create a way for people to re-enter the workforce if they decide to take a few years off? But for new people coming into the workforce, that is the wellspring of how we grow our talent.”

“I actually think one of the things you need to both recruit and retain talent is great communities,” says Baker. “That wasn’t something I would have given as an answer before I had this job, but I can’t tell you how many people have said to me that part of what makes Massachusetts attractive to them is that we have a lot of great communities. Where people want to live, can send their kids to public schools and be sure their kids will get a good education, where there are public parks and a lot of activity with youth programming, and where they can get from here to wherever it is they’re going in a relatively short hop.

“We face two big challenges with respect to that community issues,” says Baker. “One of them is our cost of housing. Some of the places we compete with are also really expensive, but we haven’t produced the level of new starts in housing for the past 25 years that we used to do every year for decades. That’s created shortages, and one of the things that happens is stuff goes on the market, it gets bid up, and people have to get farther away to find a place that they can afford and still get to work and school. That creates issues around transportation, and this is not a good cycle that we’re in. We used to do 30,000 new starts every single year for 40 years, and in the 1990’s that number fell into the 8,000-10,000 unites.

Getting the Right IT Pros and IT Infrastructure

“The biggest challenge that government has when it comes to technology, generally, is talent,” says Baker. “When we took over in 2015 we didn’t have anybody who recruited people. We used to just post jobs on the state’s website and hope somebody came to fill them. We were the first administration to use LinkedIn and actively recruit people, and make the sale for why we were the interesting place to come work.

“Getting really great tech people is hard, and one of the things we’ve had to do is think differently about how we recruit and how we staff,” says Baker. “One of the things we did was to create a cabinet-level technology services and security office that reports directly to me. The legislature, to their credit, thought this was a really important idea. They were thinking of more from a security point of view that anything else. We’re finally building a tech backbone not of devices and machines, but of people to do the work that we need to do to leverage data and technology.”

Cybersecurity, or, The Marriage of Disparate Systems

“[The goal is to be] really comfortable with our security infrastructure,” says Baker. “One of the things that happens when you don’t have a center of gravity with respect to how you think about technology, is that there’s a lot of people out there doing a lot of their own things. What they buy, what their security protocols are, and all the rest. It creates a really interesting-looking house with a lot of doors and windows.

“One of the first things we’ve been doing is baking that whole notion into the way we purchase and manage technology – there’s going to be one set of standards around how we think about security. The second thing is that if we’re doing really big projects they have to be run centrally, and we need people that know how to run big projects running those. You can’t do those as one-offs at the agency level with a couple people that have four other jobs.

“One of the other pieces that comes with this is the discussion about applications. Even there, there’s tremendous opportunity to think more holistically about applications. There are a lot of case management software packages operating in state government, and there probably needs to be more than one, but I bet there needs to be less than fifty. The opportunities to think more enterprise-wide about how to use technology generally is a new idea and I think, over the long run, will give us much better insights,” says Baker.

“What I see is a reimagining, a refactoring of the whole economy with all of these new technologies that are coming in,” says Dell. “That’s going to require incredible partnerships across government, education, and business. It will also be a lot of change, but not doing it is not an option. There will be great opportunities that are created there, and we have to do it. It will be very exciting, too. The reason that people like to go into roles of government is that the scale of problems and scope of impact is tremendous. I think that’s only going to increase.”

“We actually have a proposal that’s currently before the legislature that would create an annual financing capability of about $150 million a year to do resiliency work,” says Baker. “When I think about infrastructure I think about a lot of different things. We have a big program to connect the 53 towns in western Massachusetts which are part of the so-called “Hill Towns” that don’t have – didn’t, many now do, and others have plans that are going to get them there – access to high-speed internet. You can’t talk about infrastructure without talking about that. It’s been a really interesting education for us, the complexity of all the players public and private that are involved in trying to solve that for these communities. That, to me, is a fundamental part of infrastructure to begin with.”