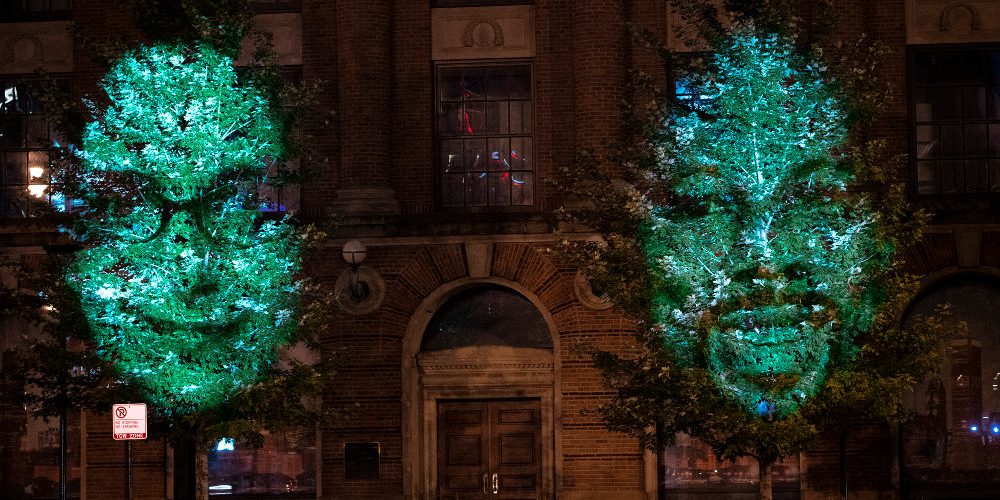 Projection mapping has come a long way since one of its first commercial uses in the Haunted Mansion display at Disneyland in 1969. Today, the technology is used to project video, animation and other colorful displays on the walls, floors and other flat surfaces at nightclubs, concert halls and sports venues.

NEC Display Solutions is showcasing a completely new application of projection mapping: onto lush, fully grown trees. As part a bicentennial celebration of the state of Illinois, NEC technology is being used to project images of the faces of 50 influential Illinoisans. Some individuals highlighted are Barack Obama, Walt Disney, Michael Jordan, and Oprah Winfrey. The colorful, engaging display, Rooted in Greatness, is accompanied by audio so that visitors can hear a bio of each person.

The free show begins at sunset each night. To ensure that the images are bright no matter what the outdoor lighting, three NEC 4K projectors put out a combined 30,000 lumens onto the three trees which make up the backdrop. The Rooted in Greatness projection mapping showcase lasts 20 minutes and runs continuously until 11 p.m.

Rooted in Greatness was inspired by the theme of the Illinois Bicentennial — BORN, BUILT AND GROWN. The trees are a metaphor for their long-lasting impact, while the projections serve as the reminders of their legacies. It will be on display for the next six months on trees that are expected to keep their foliage, and therefore their projection cavas, well through the fall season.