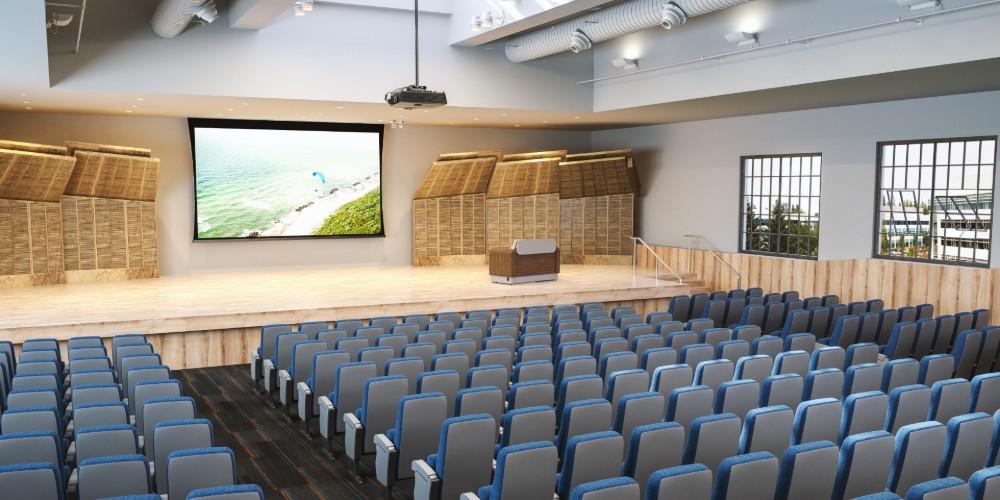 A projection system can be a huge benefit to any organization. They produce larger images at a lower cost than flat panel equivalents. They are often easily maintained and adjusted. They can be scaled up to fit multiple rooms. They fit about any indoor environment.

However, many technology managers (and even more end users) are unaware of how important a screen is to the overall system. A projector is only as good as its screen, and still many organizations will overspend on the projector and underspend on the screen, resulting in an image with poor quality overall.

There are hundreds of options when it comes to screens – and a fair number of them are low-end, poorly crafted, and will produce a far inferior picture than the projector would on a capable screen. Understandably many of us believe it shouldn’t matter what the projector hits – the power is in the box. That’s simply not true, and to believe so will leave your project worse off.

In order to ensure that you’re getting the best overall system, first technology managers and end users must understand all that goes into the screen.

When it comes to different screen surfaces there are a litany of properties that play into what would make a particular screen ideal for a particular situation.

“I think there’s a lack of understanding generally within the industry as to how much a screen can impact the viewer experience,” says Josh Davis, director of engineering for Unified Technology Systems. “There’s a lot of variables to consider when it comes to projection screens, the surfaces you utilize, and what the goal is. Every projection scenario has a different objective – different content, different seating area, different ambient light. All of those have to be taken into effect. It’s just lack of experience seeing the difference between the different screen technologies to understand how much they impact that viewer experience.”

So let’s better understand, and experience, the considerations of screens.

Foot lamberts is a calculation that’s used that takes into account the light output of the projector, the size of the image, and the gain of the screen, and comes up with an example.

“As an example, the Society for Motion Picture and Television Engineers recommends 16-foot lamberts in a dark, dedicated theater. If you have higher levels of ambient light you need more system foot lamberts to project an image that will be viewable in those particular lighting conditions,” says Brian Gluck, president of ProjectorScreen.com. “We have our foot lambert calculator on our site, and that allows you to input values and it will give you an output of your foot lamberts. Then we have a rule-of-thumb chart that will tell you what you need based on ambient light.

Now that we’ve gone to 4K projection, we’ve reduced the size of the pixel from where it was at 1080p. Previously, screen surfaces were engineered to have texture on them, which allowed the pixel to hit the surface and reflect back uniformly. Once we get to 4K the pixel becomes so small that once it hits the texture the geometry gets deformed and clarity is affected. If the projector is 4K or better, you need to pair it with a surface that will resolve 4K, and it needs to be devoid of texture.

One might go online and find a projection screen that claims 4K readiness at a cheap price point – this is simply false information. As the user can’t see the screen beside a high-end, truly 4K ready screen, users often fall into the trap. When you see a real 4K surface next to a fake 4K surface there is an obvious difference in terms of clarity.

Uniformity is another factor. Is the image equally bright throughout the entire area, or incredibly bright in the center and diminished on the edges? Better manufactured screens will have a much higher level of uniformity for a consistent level of brightness throughout the image.

Certain surfaces may skew how the colors are represented on them. They may skew everything blue, yellow, grey, etc. Well-manufactured screens will have no color shift, so that you know there is an accurate representation from the source to what you see on the screen.

Color enhancing surfaces can also feature color shift, which allows them to deepen black or darker spectrum colors in an image. Some screen surfaces enhance brighter spectrum colors in order to add more vibrancy to the image. Low-end projection screens won’t feature any sort of color shift or color reproduction enhancement – you can only get these features with well-manufactured screens.

In order to reflect back a higher level of brightness, the screen is reducing the viewing angle. The screen is focusing the light energy back to the audience at a narrower angle, allowing it to amplify and become brighter. In certain instances, you might have a narrow viewing angle where the audience won’t be beyond the width of the screen, in which case a high-gain surface would be advantageous.

There are also low-gain surfaces. A gain less than 1.0 means that less light is reflected back. You might wonder why you want to lose light from the projector. Not only will the screen absorb projector light that hits it, but ambient light that hits it as well. In some circumstances you might have a high-output projector that is too bright for the situation along with ambient light to deal with. The low-gain surface will combine to provide you with the appropriate amount of foot lamberts for a situation. 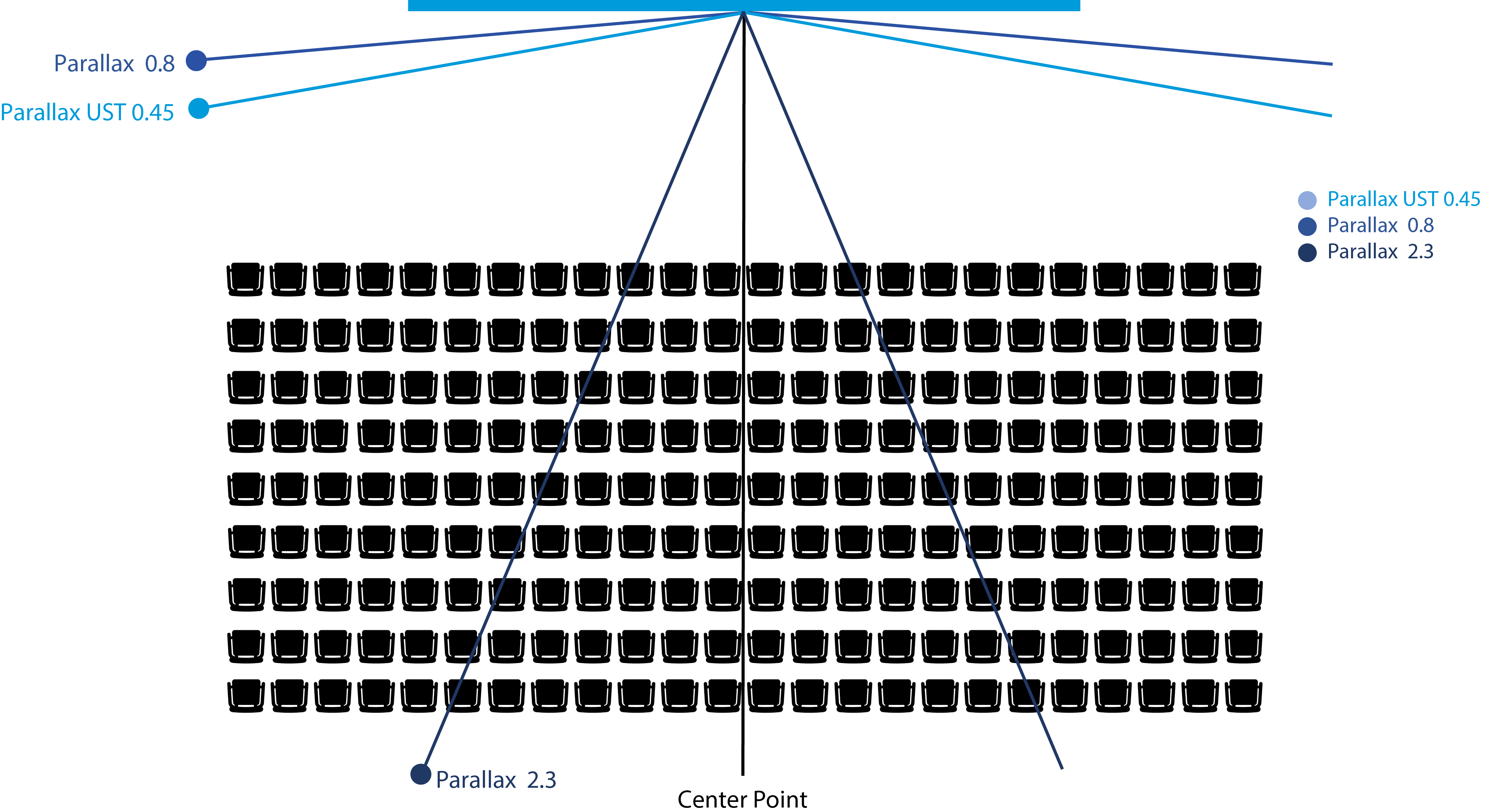 There’s a lot of conversation about what is better, a white surface or a grey surface. They both have their places. A white surface will give you the brightest levels of white but won’t do much to make the black look deeper.

“Projectors have a difficult time producing black – black is the absence of light, but a projector is trying to create that color by using light,” says Gluck. “Some projectors do it better than others, and generally speaking the higher the light output of the projector, the lower the contrast ratio of that projector. By using certain surfaces, you’re not increasing the contrast, but you’re making the blacks be perceived as deeper while trying not to affect the brightness of the whites.”

There are various types of ambient-light rejecting surfaces.

One is optical-based. There is almost a saw-tooth like structure in the many layers of this surface. The light coming from overhead is hitting the top and bouncing back, while the light coming from the projector is reflected back to the audience. This allows for a brighter image in a room with a lot of ambient light but won’t do anything to reduce ambient light that follows the path of the projector light.

There are also surfaces intended specifically for ultra-short-throw projectors. These projectors are mounted close to the screen. The light hits the screen at a steep angle. The specialized screens are created to take light from a steep angle and redirect it straight to where the audience is, while also rejecting ambient light. 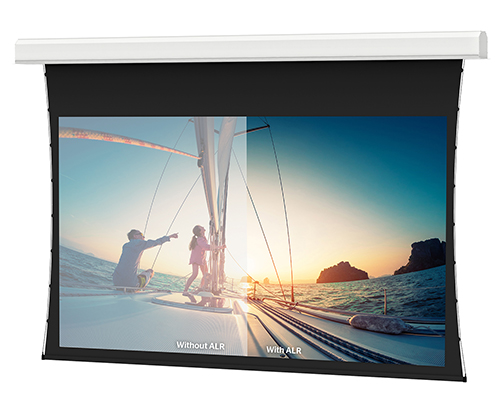 Cost is where many users get tripped up in terms of projection screens. Indeed, a cheap screen can be found online that is vastly inferior to a well-produced screen. However, this comes as a detriment to the system overall.

First, a high-end screen will be well-manufactured. They use premium components and specific chemicals, and they will almost always come with a warranty. These screens will last for, potentially, decades. They’ll also improve the system.

While the technology behind projectors (as well as flat panels and video walls) advances rapidly, and often renders even a two-year-old projector as partially outdated, the screen will continue to produce quality pictures over the span of its life. It’s a physical material. In reality, the screen is almost more important, as a higher-end screen is, by its very nature, future-proof.

Working with Integrators to Choose the Right Screen

A good integrator should educate you on the importance of choosing the right screen. If your installation partner is pushing a top-of-the-line projector without placing any importance on the screen, odds are you have a poor installation partner. While this article has done well to give you the information to understand screens, choosing the right one for your project will vary depending on the environment.

“You definitely want to have an integrator visit your location,” says Michael Jarnagin, sales estimator/designer for Ford AV. “Each space has its own individual characteristics. Without someone looking at that, they’re never going to know one hundred percent.”