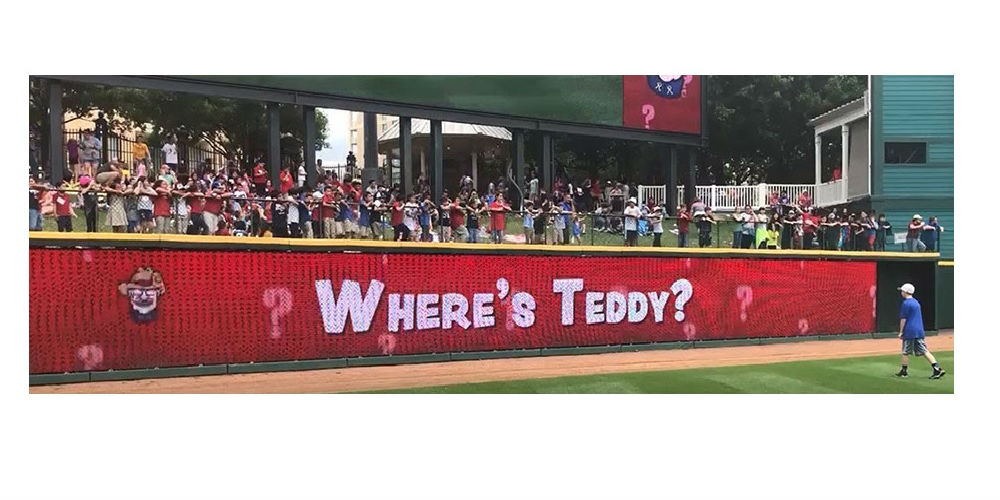 The competition at the double-A level is heating up. Consider that fans of Texas Rangers affiliate Frisco RoughRiders can now compete with a Tyrannosaurus Rex thanks to impressive game-day production using Daktronics Show Control System and LED displays.

Through its “Riders Run Series,” the RoughRiders have challenged their fans to outrun not just a Tyrannosaurus Rex, according to a Daktronics press release, but also a “sponge from a children’s television show” (we’re not sure what that could possibly be) and a well-known fictional pirate (trying to escape a non-fictional pirate would be much less fun).

These games were executed using a Daktronics Show Control System to trigger the animations across the displays.

According to Daktronics, the production team drew inspiration from the “Beat the Freeze” promotion of the Atlanta Braves between-inning entertainment. Putting the fans’ opponent on the LED display content gave the team more flexibility to match the races with different themed ideas.

It also brings to life a digital space typically reserved for advertising, adding another level of fan engagement to energize the crowd.

“I wanted to create an interactive LED game to match the promotions we were running this season, but with a twist that made it unique to the RoughRiders,” says Garret Young, manager of game entertainment for the Frisco RoughRiders.

“The layout of our three Daktronics outfield LED displays gave me the idea to make fan races. We released the biggest promotional schedule in baseball history this season, so I have a lot of material to work with.”

We hope the Riders Run Series is more successful than this instance of the Atlanta Braves’ Beat the Freeze battle:

More on Frisco RoughRiders use of Daktronics Show Control System:

The RoughRiders used their Show Control System to time the content playback to align with contestants on the field.

With the success of the first few races, Daktronics Creative Services reached out to the Frisco RoughRiders with the idea of a searching game similar to “Where’s Waldo?” for their own mascot. Teddy Roosevelt.

“After seeing the races the RoughRiders were doing, we started brainstorming new ideas and landed on the ‘Where’s Teddy?’ idea,” said Brett Hansen, account manager for Daktronics Creative Services.

“It involved a contestant running from display to display pointing to Teddy before he disappeared behind a building or off-screen. It was a fun addition to the RoughRiders race series and the crowd enjoyed the entertainment between innings.”