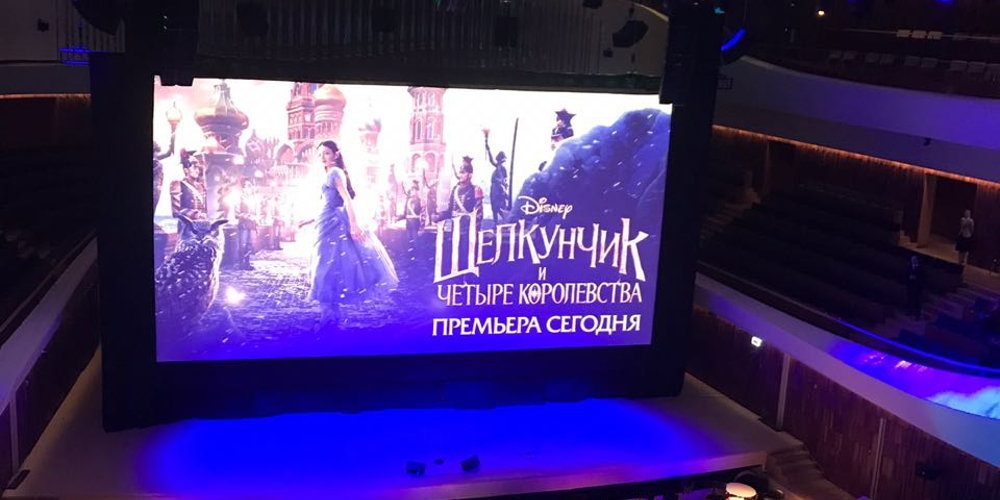 The Nutcracker is a holiday tradition. Why not take the family to Disney’s newest interpretation of this classic at your local cinema. The flick, The Nutcracker and the Four Realms, has all of the makings of a family favorite, especially when it’s projected onto the big screen by a Christie laser projector system.

Theater-goers in Moscow had the opportunity to witness the official premiere of this Disney film in the full glory of Christie’s cinema projector system. The CP4325-RBG pure laser projector with RealLaser technology and CineLife electronics platform made its debut with The Nutcracker release at Zaradye Concert Hall.

The pairing of the premiere and the Walt Disney Studios Sony Pictures release made a lot of sense, given that the screening marked the first time that an international premiere of a movie would take place at the venue. “No other venue in Russia can match the acoustic and technical specs of this multifunctional hall. The space accommodates an audience of 1,600 and can be transformed to suit the format of an event, concert or show. But holding a movie premiere here was actually something of a challenge for us,” says Arseny Kuzminich, the CEO of Asia Cinema, the company that provided tech support for The Nutcracker premiere.

The decision to step up the production with a high-quality projection system that could provide superior brightness and image quality was only part of the process. The installation of the gear would require some revamping of the theater. Fortunately, the compact size of the Christie projector, as well other factors, would simplify this task somewhat.

“We needed to come up with a compact way of housing the equipment in a specially constructed projector cabin right there in the hall, as the existing central control room was not set up for the requirements of a movie screening. Then there was the challenge of ensuring low noise levels. We also had to find a projector model that didn’t need a separate fan and required minimal cooling. The only projector that could do all of this simultaneously was the Christie CP4532-RGB,” adds Petr Provorov, head of Asia Cinema’s Technical Department. “We ended up doing something totally new to us. The custom-projector cabin we provided turned out well, as it’s easy to convert and assemble, and we can certainly see something like it coming in handy again in the future.”

The management team at Zaradye Concert Hall complemented the outstanding movie presentation by welcoming theater-goers with special events in the lobby. On display was a limited line of dresses from Russian designer Alena Akhmadullina, as well as themed areas: the Land of Flower, the Land of Sweets, the Land of Snowflakes and the Land of Amusements.

Even the opening “credits” helped set the stage for a night of memorable entertainment, as singer Matteo Bocelli performed the song Fall on Me from the movie.

Based on the feedback provided by guests of the premiere—a first of its kind for Zaryadye Concert Hall—the Christie laser system will likely be put to good use for future movie presentations.